Memorial Day: When the fast lane becomes a slow walk in the park 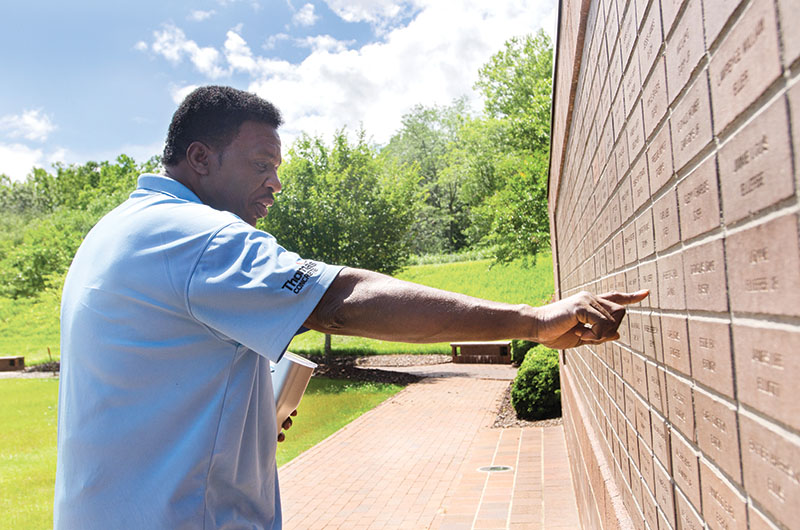 KRISTI CRAVEN/ SALISBURY POST Jerry Smith, from Willow Springs NC, points to his cousin's name, Neal Albert Denning, as he says "How you doing cousin?" on May 25, 2017 in Lexington.

LEXINGTON — Heading back home from Charlotte the other day, Jerry Smith couldn’t help but pull into the northbound Interstate 85 rest area, park his car and head off on the 900-foot-long path.

“I needed to walk to wake myself up,” said Smith, who was about halfway on his three-hour trip to Willow Springs in Wake County.

But there was a more serious reason behind Smith’s stroll. He was on a personal mission to pay tribute to a long-lost cousin.

Smith’s walk through the woods led him to the N.C. Vietnam Veterans Memorial, situated in one of the more unusual places for a memorial — what essentially is the I-85 median between the northbound and southbound lanes.

From both rest-stop sides, you don’t see the memorial site at first. Significant walls and landscaping purposely hide it from view.

It lies within a circular crater and the brick paths lead down to the entrance, where American, state and POW/MIA flags fly and a huge tablet explains what this place is.

Mike Lineberry, a Department of Transportation employee, had just taken some weathered flags down and replaced them with new flags for the holiday.

The park is dedicated to the 216,000 North Carolinians who served in the Vietnam War and, more specifically, the 1,600 men and women from the state who were killed or missing from the conflict when this place was first opened on Memorial Day 1991.

As Smith walked in and the memorial opened in front of him, a healthy breeze waved through the trees, and he could still hear the muffled sound of interstate traffic in the distance.

Smith veered onto the left branch of the circular path, and halfway around the circle he stopped at the massive, 100-foot-long wall before him. Each brick held a name, listed alphabetically, and Smith started his search.

When he found the one he was looking for, he paused a moment, stepped forward and extended a finger to touch the name etched into the coarseness.

“How you doing, cuz?” Smith asked out loud, as though he were talking to Neal Albert Denning.

Smith, now 57, said he was only 5 or 6 years old when Denning died as an infantryman in Vietnam. As Smith recalls, his cousin joined the Army immediately after high school and was probably still a teenager when he was killed in his first tour.

His kid instincts at the time told Smith that Denning was “a very good, very good person.” He remembered Denning’s driving an old Ford school bus — Bus No. 200 — as a high school student.

Denning is buried in a church cemetery back in Willow Springs. Smith said it bugs him to know that young kids, such as his cousin, were given such a great responsibility in fighting for the country, “and then you’re forgotten sometimes.”

“They fought to keep us safe,” Smith said.

In 1991, the names of 1,620 North Carolinians were etched into the individual bricks on this memorial wall. Since then, under an “Addenda” heading, seven more names have been added.

Rowan County has its share of names on the wall. The exact number of men who died in Vietnam from Rowan County has always been a moving target through the years. The best figure is 39 — names such as Cockerl, Gilmore, Morgan, Pilot, Richardson, Sells, Teeter, Willard and Wright.

You might think 39 names are not a significant number, until you consider all the painful notifications, the flag-draped coffins, the funerals and repercussions associated with each man.

Then, the number becomes monumental, and the wall weighs heavy.

Smith said this park is “a beautiful place.” When it was built, 100 trees were planted to represent the state’s 100 counties. Overall, the park — with its landscaping, bricks and benches — is mostly a study of reds and greens.

Many years ago now, Taylor Clay Products of Salisbury provided 58,000 bricks for this project, selling them at a good price to the Brick Association of America. Again, there is symbolism:

Lineberry, the DOT employee, said the state built two bridges to “swap” the northbound and southbound lanes of I-85 so it could create this unusually big median back in the late 1980s and early 1990s.

Thanks to the swap, topography and design, you don’t realize it, but in this section of I-85 between Lexington and Thomasville, the southbound lanes are to the right of the northbound lanes.

Lineberry said it’s funny, but sometimes people visiting the Vietnam Memorial Park from the northbound rest area become disoriented. They exit to the southbound side and look everywhere in that rest area for their cars, thinking they have been stolen.

The walk to the park is much shorter from the southbound rest area. The 900-foot-long path on the other side includes a 1907 bridge moved here from Stokes County,

Lineberry said the top of the memorial wall has a new rubberized roof and metal trim. About three years ago, LED lights were installed into the sidewalk course of bricks next to the wall, which is now two rows of brick wider than it was originally.

The I-85 memorial park has more visitors than you might think. “Throughout the year,” Lineberry said, “people come in here and walk around.”

On their way from Atlanta to Washington, D.C., Amy Williams and her sister, Mary Ordway, took the long stroll down to the memorial with their younger traveling companions, Joshua and Danny Ordway.

The family members, who have strong military connections, weren’t looking for any particular names on the wall. They were just paying their respects. Williams has a son who is a recent graduate of West Point.

“This is nice,” she said next to the memorial. “It’s reminiscent of the wall in D.C., but in a different way.”

Here, the meaning of Memorial Day hits you like a brick.