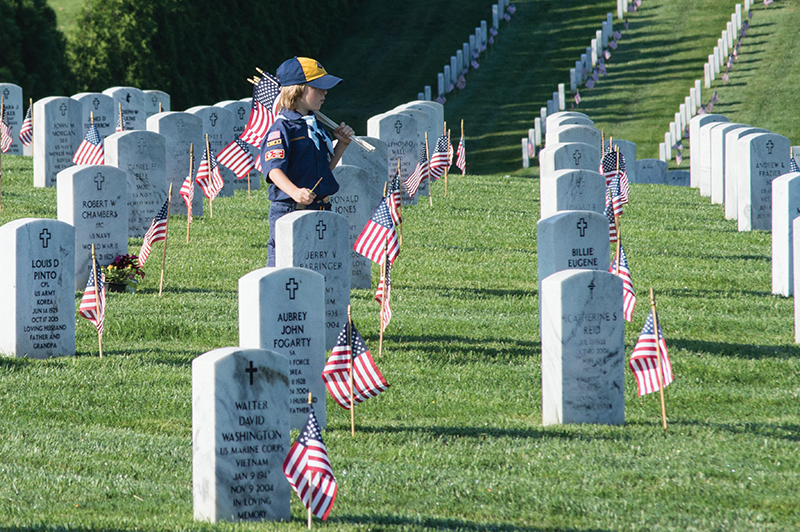 SALISBURY — Locals saluted thousands of veterans buried in the Salisbury National Cemetery and its annex on Saturday by placing a small, American flag in front of each grave.

In recognition of Memorial Day, a large crowd of people, most of whom were Boy Scouts or Girl Scouts, placed an estimated 7,400 flags on graves at the Salisbury National Cemetery Annex at the W.G. “Bill” Hefner VA Medical Center. A number of flags were also placed on graves at the Salisbury National Cemetery near the intersection of South Railroad Street and East Monroe Street. Event organizers estimated 10,000 total flags were placed on graves at both locations.

At the start of Saturday’s event, Retired Master Sgt. Dean Moore, incoming president of the Rowan County Veterans Council, used a simple comparison to emphasize the importance of Memorial Day, which originally started after the Civil War as Decoration Day.

“Just think, and this is something you’ve got to remember, if you can read the side of that truck, thank a teacher,” Moore said. “If you can read it in English, thank a veteran.”

Tim Jones, the acting foreman of the cemetery, said Saturday’s crowd was the largest he’s seen in his seven years on the job. Jones is a veteran himself.

“To see all these people come, support us and support the veterans is amazing,” Jones said. “It’s important we take the time to honor those that fought for our country, the ones that trained to protect this country and gave their life and time. Not only did they serve and sacrifice their time, but also their families sacrificed their time. For me, it’s about the families, too.”

After a brief gathering at the start of Saturday’s event, the crowd dispersed. Event organizers said all flags at the Salisbury National Cemetery Annex were placed in front of a grave within 24 minutes.

The crowd of people included father-son pair Daryl Atkinson and Seth Atkinson, a Cub Scout who has reached the rank of tiger cub. Seth Atkinson said it was important to place flags in front of the graves to honor veterans who died.

Former Scoutmaster of Troop 448 Jack Kepley, a 93-year-old army veteran, said the Saturday event is “what scouting is all about.”

In addition to Saturday’s event, the Salisbury National Cemetery Annex will have a Memorial Day ceremony on Monday. The ceremony will start at 10 a.m.