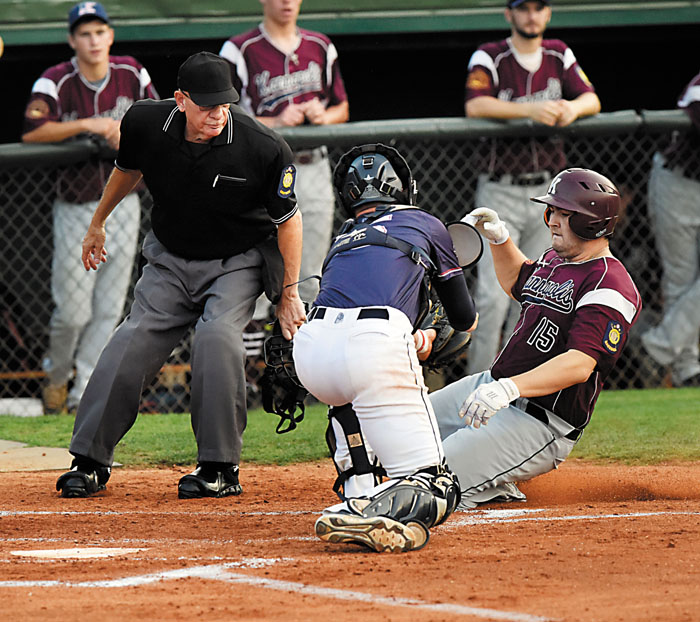 Wayne Hinshaw/for the Salisbury Post ... Rowan catcher Trevor Atwood is set to tag out Kannapolis’ Justin Sponseller at home plate during Saturday night’s American Legion game at Newman Park. Sponseller tried to score from first base on a double but Bryson Wagner’s relay throw from Will Brown was in time for the out in the third inning. Rowan won, 11-1.

Left-handers Hayden Setzer and Henderson Lentz, along with big righty Pearce Wilhelm combined to shut down Kannapolis on four hits and one unearned run to improve to 2-0 for the new season.  Rowan closed out the game in the bottom of the seventh by the mercy rule with a five-run outburst.

“We did a good job overall tonight,” said acting head coach Seth Graham. “It all starts on the mound and that is what we need to give us a chance. There were some plays we didn’t make in the field early but we were able to overcome those.”

“I was happy for the most part with my outing,” said Setzer who had not pitched for almost two weeks since his East Rowan season ended. “I could have hit my spots a little better but overall I was able to get the job done.” He went the first 3.2 innings allowing just two hits and fanning two before being lifted due to a tight touch count.  Kannapolis (0-3) did reach him for an unearned run in the top of the first on a two-out single by Joe Talone.

The Rowan batters faced a tough task with Kannapolis starter Matt Baucom, an A.L. Brown grad who is headed to to UNC-Pembroke. They chipped away for the tying run in the first as Chandler Blackwelder singled, stole two bases and scored on Lee Poteat’s fielder’s choice.

Rowan then took the lead, 2-1, in the second as Brandon Walton lumbered for a triple and scored on Tanner File’s two out single.

Blackwelder, who led the Rowan assault with a 2-for-5 effort and two RBI, sparked a four-run outburst in the third that gave Rowan all the breathing room they would need. He reached on an error, stole his third base of the night then scored on Trevor Atwood’s RBI-single. Rowan then followed with run scoring hits from Will Brown and Bryson Wagner to make it 6-1. Post 115’s Baucom went two more very effective innings but they damage was done.

Wilhelm, a big right-hander from West Rowan who is headed to Catawba next year, did his shutdown job in the sixth and seventh by allowing a single while fanning three batters in the middle of the order. After catching in the opener on Friday, Wilhelm felt he did okay on the mound.

“I was just trying to get outs and give up as little as possible,” he said. “Luckily, we had a some runs to work with. I was able to get my pitches in the right spots tonight.”

The game wrapped up in a surprising fashion in the bottom of the seventh when Rowan victimized the Kannapolis bullpen for three walks, a hit batter and two clutch hits to end the game by the 10-run rule. The first key hit was a two-run double to right by Salisbury High’s Chandler Lippard, making the score 8-1.  A bases-loaded walk to Brett Graham made it 9-1, setting the stage for a dramatic finish.

Blackwelder was at the plate with a full count that set the merry-go-round in motion on the bases. With teammate Wagner barreling in on him from third, Blackwelder served the ball into left field off reliever Casey Ritchie for a two-run single to end the game.

“I was just trying to be patient at the plate in that last at-bat,” Blackwelder said. “I had been impatient the whole game, so I wanted to look at some pitches. It worked out just fine.”

Rowan will have a quick turnaround today as they travel to face Randolph County at historic McCrary Park in Asheboro at 3 p.m.

GAME NOTES: Prior to the game Saturday night, members of the 2016 Rowan Legion team were presented with commemorative rings in recognition of their outstanding season. The team posted a 41-13 mark en route to winning the Area III title, the State championship, the Southeast Regional title and finishing as runner-up in the American Legion World Series.  One of those rings went to outfielder Seth Cauble who was a standout last season for Rowan but is now playing for the Kannapolis Legion team.