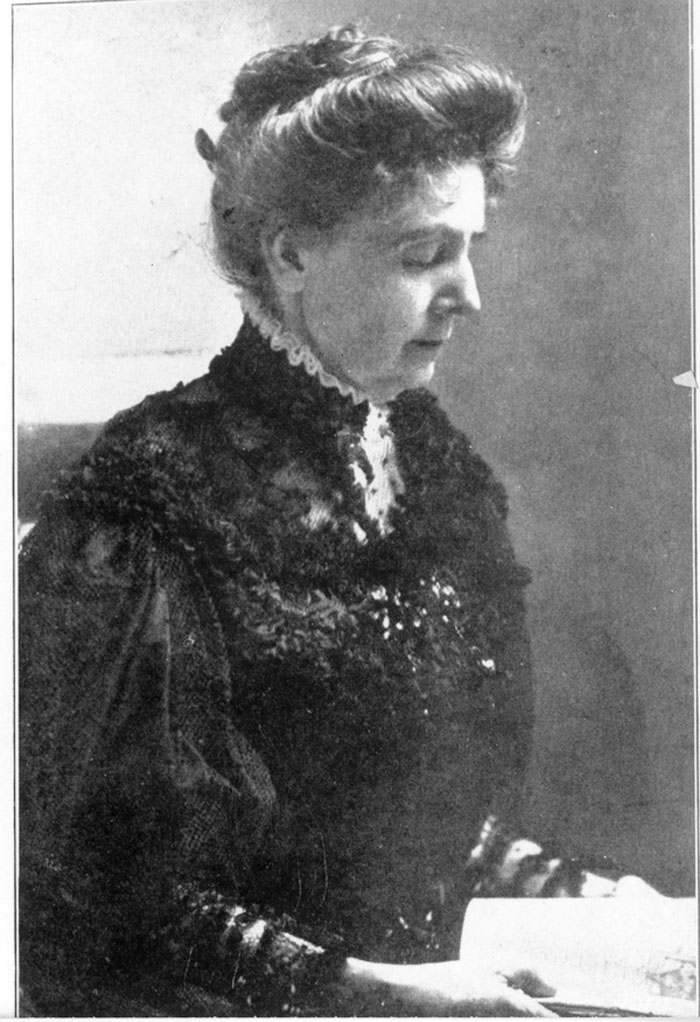 I’m alerting the media: John Hart’s next novel, “Hush,” will appear in bookstores on Feb. 27, 2018. Hart may be the most famous author reared in Salisbury, but can you name our first published novelist?

The next time you’re walking past the Rowan Public Library on West Fisher Street, locate the granite memorial that resembles a tombstone and you’ll be able to answer that question.

Born in 1846, Frances Fisher was a product of her time. Like many other female writers who wished to be taken as seriously as their male contemporaries, she wrote under a pseudonym, Christian Reid — Christian for its cross-gender appeal and Reid for “its beauty and plainness.” Christian Reid’s successful first novel, “Valerie Aylmer” (1870), about “a coquette’s struggle against strong manhood,” achieved critical acclaim and spurred her to create a series of five novels with the Southern plantation as the backdrop.

But it was “The Land of the Sky,” published in 1876, that brought attention and acclaim to Christian Reid and her native state. A daily travel sketch that follows a group of friends from the Piedmont as they set out for mountains in the summer of 1875, the book inspired readers across the nation to make their own journeys to Western North Carolina to revel in the beautiful scenery and healthy mountain air. Were it not for Christian Reid, the Asheville Times wrote upon the occasion of her death in 1920, Asheville would still be a village.

In a big way, tourism in the mountains of North Carolina, the Land of the Sky, owes a debt not only to Frances, but also to her father, Charles Frederick Fisher, a graduate of Yale who, after a career in politics, landed a position as president of the Western North Carolina railroad. When the Civil War broke out, he armed a regiment using his money and his own men.

(Side notes: Fort Fisher was named in his memory. The day that Colonel Fisher reported his men ready for duty, his good friend, Governor John Ellis, died.)

Colonel Fisher led his regiment, the North Carolina Sixth, full speed ahead in the Battle of Manassas, where, on July 21, 1861, a bullet to the forehead ended his life. His remains were returned to his family and buried in the Lutheran cemetery. After that, Charles’ sister Christine took charge of Frances and her brother and sister.

Christine, a bit of a recluse and a great reader, educated Frances at the family home (which no longer exists) at 102 N. Fulton St. The monument that rises from the ivy in front of the library originally stood facing that home, the place where Salisbury’s first novelist penned almost all of her books.

Frances Fisher, who preferred the horse and carriage over the new-fangled automobile and was fascinated with all things Mexico, was not a woman one could easily pigeon-hole. No doubt the town gossiped over her marriage to a foreigner, James Marquis Tiernan, a mineralogist with the Northern Pacific Railroad who first laid eyes on Frances at Sacred Heart Catholic Church (then just down the block from Fisher house).

By all accounts, Salisbury’s railroad-loving novelist never tooted her own horn, not even to her close friends. She chose to do her loudest talking in writing. You can find out more about her work and life by reading “Biography of Christian Reid,” by Kate Harbes Becker (my source for the information and quotations contained in this article).

Summer Reading Kick-off: Dan Nicholas Park, June 3. Festival, 11 a.m.-1 p.m.; concert 1:30 p.m. This free celebration is open to the public; all ages welcome. From 11 a.m.-1 p.m., explore the sports field and enjoy the Summer Reading festival, which features crafts and activities from a variety of vendors and participants. Then, at 1:30 p.m., the Billy Jonas Band will perform in the Stanback Outdoor Theater. Enjoy Dan Nicholas Park’s concessions or bring a picnic.

Book Bites Book Club: May 30, 6-7 p.m., South Rowan Regional. Free, open to the public. Do you enjoy good books, fun fellowship and tasty food? If so, join this free book club where we discuss a different book each month and serve refreshments loosely related to the theme. This month’s book is “Their Eyes Were Watching God” by Zora Neale Hurston. Need a copy? Call 704-216-7731.

Literacy: Call the Rowan County Literacy Council at 704-216-8266 for more information on teaching or receiving literacy tutoring for English speakers or for those for whom English is a second language.

POPS: Tasty treats available at this year’s Pops at…