POPS: “Luck” chosen as the theme for the 13th Annual Pops at the Post 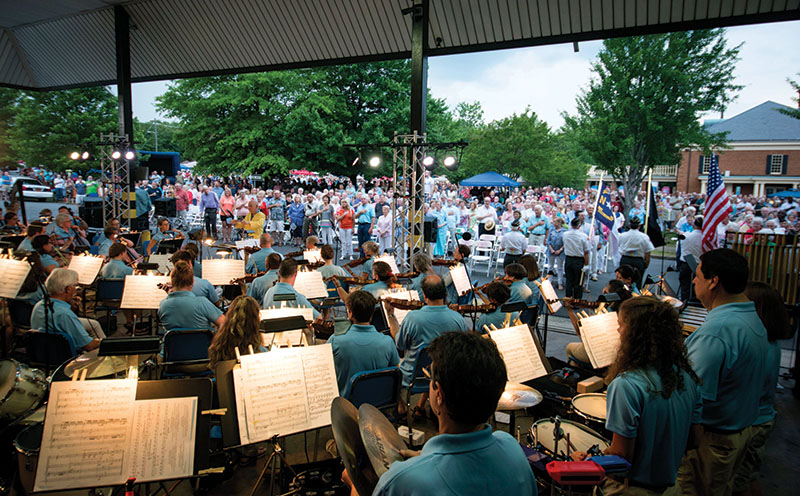 In 12 years, Pops at the Post has never had to relocate due to weather, though last year was a close one. Crowds braved everything from a light sprinkle to a torrential downpour, but the musicians?

These blessings, coupled with Pops at the Post’s now-13-year run, inspired Maestro David Hagy to choose “Luck” as a fitting theme for this year’s concert. His selections address both sides of that proverbial coin: good luck and bad.

“I like it when we have … selections that are down,” Hagy said. “It tends to punch the numbers that are so much more happy.”

On that happy front, audience members will recognize selections from numbers like “I’m Looking Over a Four Leaf Clover,” “Three Coins in a Fountain” and “Luck Be a Lady.” These will be contrasted with darker, broodier pieces like the theme from Apollo 13 and Kyle Petty’s “Hard Times.”

Petty, a former NASCAR driver, will be the concert’s featured guest, and his attendance represents one of many fortunate events that occurred for Hagy while planning for this year’s concert. Hagy’s stars, it seems, were in alignment.

“(‘Hard Times’) is what led me to think of asking Kyle to join us, because the song was so appropriate to the theme,” said Hagy, referencing Petty’s piece about a down-on-his-luck man trying to support his family. “I had all sorts of plans in case (Petty) wasn’t going to do this. This in prime racing season so I knew it would be difficult for him. … I was worried about his time.”

Despite racing season and maintaining a busy schedule with his Victory Junction charity, Petty decided to make things work. He will be joining the symphony for two numbers.

There would be more serendipity for Hagy as he prepared this year’s program. While he knew “Three Coins in a Fountain” similarly fit the theme, he feared obtaining a Mantovani arrangement of the piece would be impossible.

“I didn’t know I would get (Mantovani’s) granddaughter in England!” Hagy said with a laugh.

Said granddaughter would provide Hagy the contact information of the Floridian orchestra still featuring her grandfather’s work. The Salisbury Symphony was, in turn, sent copies of the desired sheet music without charge or rental fee.

“It was all done as a gift for us … because we asked.”

Whether by fate, happenstance, or something more, Hagy and the Salisbury Symphony will be presenting a lineup of songs that this year’s guests are sure to enjoy. Only the weather remains an uncertainty.

Will Pops at the Post’s relocation-free streak be broken this year?

With a week of stormy weather behind us, we’re knocking on wood.