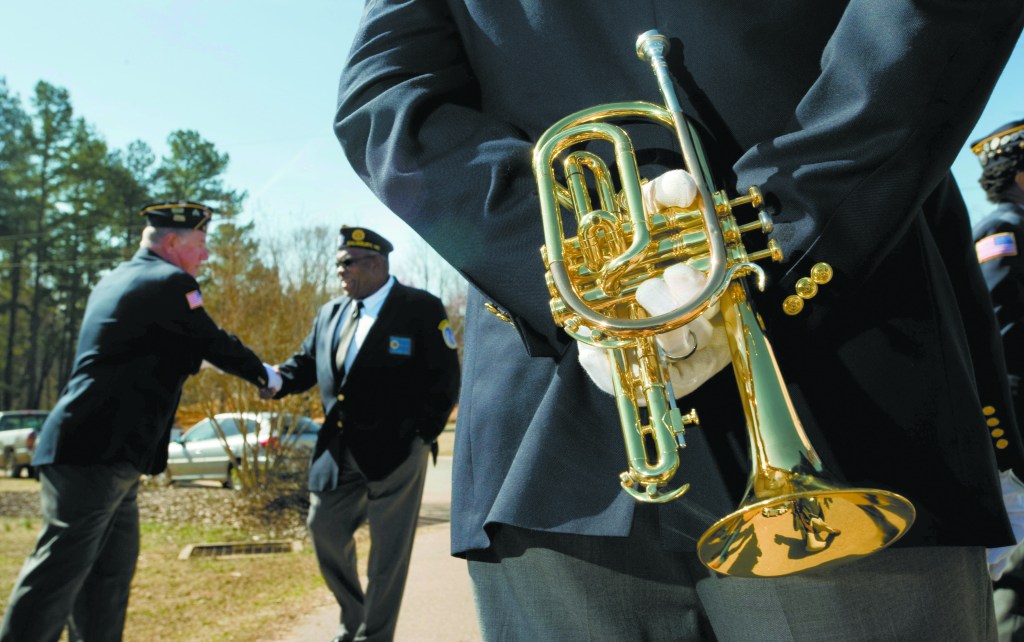 In 2011 file photo, Benny Freeze and Elijah Caraway greet each other before the funeral of a fellow veteran as David Shaver, who will play Taps, holds his cornet. All are members of the Rowan Honor Guard. Photo by Jon C. Lakey, Salisbury Post.

Headlines in the Salisbury Post’s archives bear witness to the greatest cost of war.

“Marine from Millbridge killed in Iraq”

The nation as a whole has grown more appreciative of the armed forces and the sacrifices members make on our behalf. Today, some 1.4 million men and women are on active duty in the U.S. military around the world. As Memorial Day approaches, though, it’s time to focus on the people who went before them — and made the ultimate sacrifice.

They are the fallen, the men and women you cannot shake hands with and thank for their service. You can’t pick up their tab in a restaurant or salute them in Veterans Day parades. They left home to serve their nation and never came back, and we cannot begin to know the full measure of what they and their families gave for our country.

“The real war will never get in the books,” poet Walt Whitman once said. Nor will the real loss.

Ever since 1950, U.S. presidents have issued proclamations calling for Memorial Day to be observed as a day of prayer for permanent peace, with people observing a National Moment of Remembrance at 3 p.m.

“Memorial Day is our nation’s solemn reminder that freedom is never free,” begins a proclamation from President Donald Trump. “… On this ceremonious day, we remember the fallen, we pray for a lasting peace among nations, and we honor these guardians of our inalienable rights.”

The lost members of our military are the phantom guards of democracy, the unseen sentinels who will watch over Memorial Day services on Monday knowing they did their job. They made our country stronger and safer. They kept us free. The lyrics of “Taps” are for them:

Day is done, Gone the sun,

From the lake, From the hill,

All is well, Safely rest,