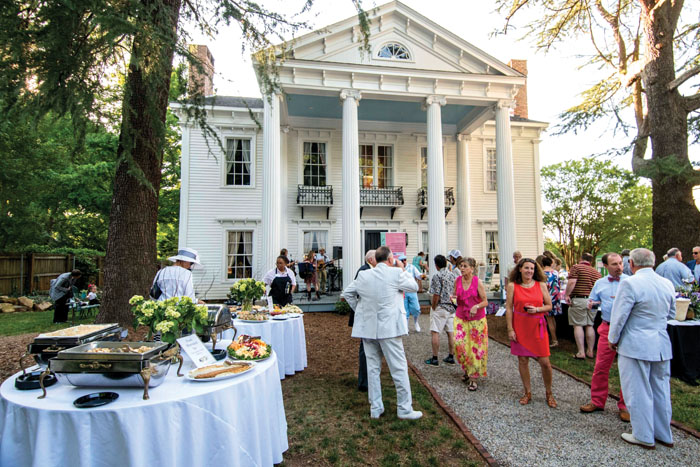 Take 18 handsome male models, mix in dozens of family and friends, top everything with a huge white tent set on a gorgeous lawn in the Historic District, and what do you get?

The third-annual High Cotton Men’s Fashion show was held Saturday evening at the Fulton-Mock-Blackmer-Dixon House. The event — always a hoot, thanks to the brave guys who strut their stuff — raises money for the Family Crisis Council. Rick Anderson, owner of Sidewalk Deli, served as emcee after modeling the first two years.

Renee Bradshaw, the organization’s executive director, said after the festivities that High Cotton had in fact exceeded the goal of $50,000.

“That’s not including ticket sales or the silent auction,” said Bradshaw, dressed in a stunning silver cocktail dress with matching hat. And fabulous silver shoes, too.

The agency drew nothing but praise from attendees. The guys who modeled were happy to play their part. For Corey Basinger, the show was a “three-peat.”

“It’s hard to say no to the people who ask,” said Basinger, a local civil engineer.

Kenan Smith, meanwhile, was preparing for his second turn on the runway. Smith, known for his bold and outgoing personality, was sporting a bold madras sports coat. He paired it with equally colorful pants and an orange bowtie.

Smith said that his wife and two daughters bought the sports coat, and it would be going directly to charity after the evening was over.

This was Tom Staats’ second year as a model. He and wife Cyncie celebrated their 50th wedding anniversary earlier this year.

“He’s a pro at modeling now,” she said, laughing.

You know Al Wilson is a local builder extraordinaire, but did you also know he was a model?

Sure enough, Wilson, who worked on hosts’ Glenn and Beth Dixon’s home — along with a multitude of other local projects — donned a Pierre Cardin sports shirt with a palm leaf pattern in black and taupe, which he paired with his own “Work Worn” jeans, which he said he’d auction for the Family Crisis Council. He brought along several extra pairs, and was as good as his word when the show was over.

Besides hosting the event, Dixon also took to the runway wearing a golf ensemble which he said was an homage to his beloved UNC Tar Heels and the late Arnold Palmer. Dixon wore a Carolina blue newsboy cap, a blue and white argyle vest with matching socks, along with Carolina blue knickers or plus-fours, as he called them. To complete this, um, unique look, he carried a walking stick that started its life as a golf club. Fore!

“When I was elected, I was shocked at the number of homicides related to domestic violence,” she said. “We introduced a domestic violence court to address these issues, and we work hand in hand with Family Crisis Council. They’re a wonderful organization for our community.”

Domestic violence, Cook said, crosses all socioeconomic boundaries, and can include verbal and physical abuse. “It’s always important to continue to bring about awareness.”

And High Cotton does it in such a terrific and lighthearted way.

Another three-peat for the evening was District Court Judge James Randolph, dapper as always in his chosen outfit.

“I don’t have a choice, you know?” Randolph said of his participation each year. “It’s a great cause. I wouldn’t miss it.”

The law was well represented, as attorney Graham Corriher took his second trip down the runway.

“I didn’t want to wear seersucker again, so I went and found this pair of yellow pants on sale,” said Corriher, who attended with his lovely wife Danielle. “I had this blue jacket and I thought it might work.”

He said he recently read that Prince William wears yellow pants as well.

“It’s a great organization that does a lot of good work, and I’m happy to work with them,” said Sease, sporting mint green pants this particular evening.

Jason Keith took the runway with his precious daughter, Genevieve, who promptly stole the show in her Eloise-inspired outfit and her Eloise doll, dressed just like her. With her dad’s help, Genevieve executed a perfect “fancy turn” before stepping off-stage.

Speaking of kids, Matt Marsh’s son, Levi, 7, picked out his dad’s outfit. Marsh, owner of The Forum, was decked out from head to toe in Vineyard Vines.

Derrin Ricks actually went to modeling school, so his turn on the runway in a Vinci three-piece suit was smooth as silk. His biggest fan was there to lend her support.

Creating the big finish was none other than Chris Bradshaw, Renee’s husband. He told his wife that last year was his final turn on the runway. Uh-huh…

He seemed in pretty good spirits, though.