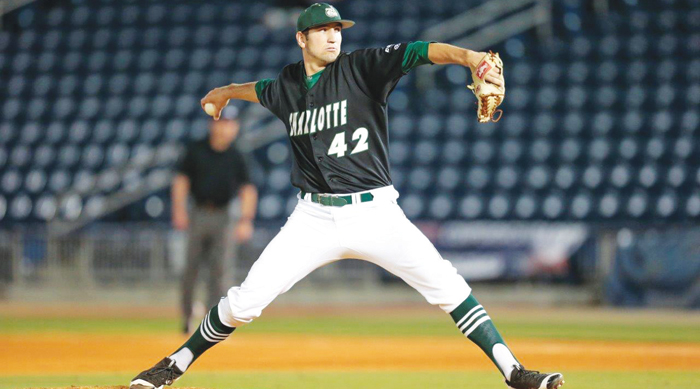 Bobby McDuffie/charlotte49ers.com ... Charlotte pitcher Colton Laws (42) fires during Thursday night’s 5-0 shutout of Texas-San Antonio at the Conference USA Tournament in Biloxi, Miss. Laws stuck out 14 batters, a new record, and walked no one.

“Colton Laws has decided he wants to be really good,” said head coach Loren Hibbs. “He’s physically gifted, has put in the work and with all the great pitchers that have come through this league and to set the record for strikeouts in C-USA Tournament play is incredible. For him to do what he did tonight, is just a testament to his hard work, his plan and desire to compete.”

Laws (7-2) began Thursday night by carrying a perfect game into the seventh inning. The record-setting night, which finished Laws two shy of tying a school record, had at-least one strikeout in eight of his nine innings. The only frame he didn’t in the fifth, he retired all three UTSA hitters on three-straight pitches.

The redshirt sophomore, a Faith resident and Carson High School graduate, ended the first with back-to-back strikeouts before getting two more in the fourth and struck out the side in the seventh. In the Roadrunners’ seventh, Kevin Markham broke up Laws’ perfect game with a liner down the right field line leading off.

Laws shattered career highs on Thursday with his four-hit shutout and 14 strikeouts, needing 102 pitches to do the trick. The only three-ball count came with two outs in the ninth inning, fanning Trent Bowles to end the contest on a 3-2 pitch.

“I was feeling good tonight and able to locate,” said Laws. “Brooks came in and set the tone for the tournament yesterday and I had a good defense behind me. It feels great to have the conference tournament strikeout record. It all comes with the hard work and that makes me feel good.”

Charlotte (34-22) gave Laws his first two runs of support in the third as a Zack Smith walk followed by back-to-back singles by Hunter Jones and Harris Yett loaded the bases for Zach Jarrett. Jarrett drove in Smith with a sacrifice fly to center plating Smith for a 1-0 lead. Brett Netzer followed immediately with an identical sacrifice fly to center bringing in Jones for the 2-0 lead.

In the seventh, a one-out Smith double and single to right by Jones set up Jarrett to help clear the stage for Laws. Jarrett destroyed a 3-2 pitch to left for a three-run bomb, his 12th of the year, gave Laws and the Niners their 5-0 lead.