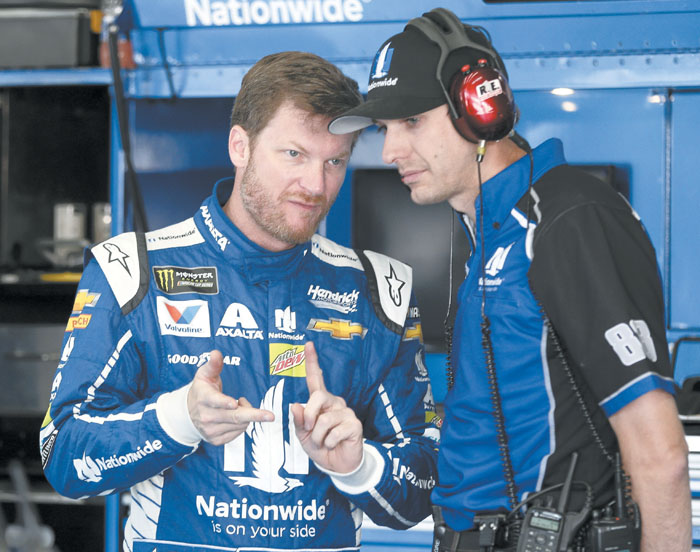 Dale Earnhardt Jr., left, talks with crew chief Greg Ives, right, during practice for Sunday's NASCAR Cup series auto race at Charlotte Motor Speedway in Concord, N.C., Saturday, May 27, 2017. Earnhardt's earliest memories of Cup racing as a child are from Charlotte Motor Speedway, so he'd like nothing more than to win his first Cup points race here ever on Sunday at the Coca-Cola 600 before he retires. (AP Photo/Chuck Burton)

He remembers watching his famous father Dale Sr. tear up the track. He ran plastic Richard Petty and Cale Yarborough cars down a nearby dusty hill. He recalls his days as a teenager, breaking into the track with buddies and hotwiring golf carts until they were chased off by approaching headlights.

It’s the place where he’d finish running an Xfinity race and return to the Campus Connection apartment complex across the street and drink beer with his buddies until late into the night.

It’s also the track where he ran his first NASCAR Cup Series race — and won the 2000 All-Star race as a rookie.

But of all of the memories at Charlotte, one is strangely absent — a Cup Series points race victory.

The 42-year-old Earnhardt would like to change that in his final season as a NASCAR driver before stepping away for retirement. In fact, he wants to win the Coca-Cola 600 more than any other race remaining on the docket.

There are others who’d like to see the sentimental favorite win this one. Seven-time Cup Series champion and teammate Jimmie Johnson has been doing everything he can this week to help Earnhardt reach victory lane.

Earnhardt was a non-factor at the All-Star race at CMS last weekend, but brought a totally different setup this week after consulting with teammate Johnson and No. 48 team crew chief Chad Knaus. That’s not a bad idea since Johnson, a seven-time Cup champion, has won more Cup Series races at CMS than any driver.

“We totally eighty-sixed all that stuff we ran last week and we put in Jimmie’s setup just like him,” Earnhardt said. “We are leaning on (the No. 48 team) pretty hard this weekend.”

Earnhardt ran a little better in practice on Saturday after qualifying 19th.

Kevin Harvick will start alongside Kyle Busch on Sunday for NASCAR’s longest race, a grueling 400-lap run on a 1 1/2 -mile oval.

“Jimmie has come by the car a couple of times in practice already looking at notes and printing out our driver traces and trying to figure out whatever we can do to help me,” Earnhardt said. “He comes over with these printouts and says, ‘This is what I’m doing with the gas and this is what you’re doing and this is where the time is getting loose and maybe try this and that and the other.’

“He is a super teammate. I’m lucky to be able to work in the same shop with him.”

Earnhardt’s best chance to win here came in 2011 when he ran out of gas on turn four of the final lap while leading the race.

It was a devastating at the time for Earnhardt and took him weeks to get over, but he now says the loss “doesn’t weigh on him much.”

Regardless of whether Earnhardt gets his first Cup Series win of the season on Sunday, he said it won’t tarnish the fond memories he has at Charlotte.

But a victory here sure would provide a fairytale ending.

“I would have guessed I’d have got a win here in a point race at some point, but it just hasn’t happened,” Earnhardt said. “For whatever reason it’s really been tough for me. We just really haven’t been able to hit on how to get around here. Either how to set the car up or what I’m looking for or what I need to be doing with the car driving it.

“But, we will keep digging this weekend.”