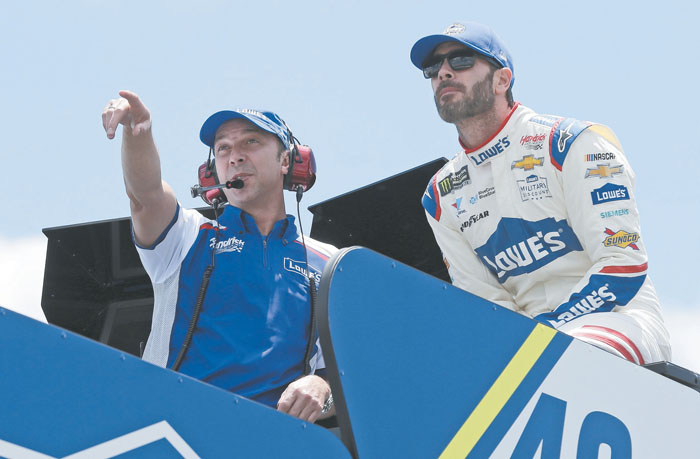 CONCORD (AP) — NASCAR is trying to inject some excitement into Charlotte Motor Speedway, where recent races have been relatively predictable, even dull: When a lead car breaks free from the pack, it’s been nearly impossible to catch.

Nobody could catch Kyle Larson when he was running in clean air during the first two 20-lap segments of the NASCAR All-Star race last weekend. And pole sitter Martin Truex Jr. led 392 of 400 laps in last year’s Coca-Cola 600. Those make for dominating performances, but don’t necessarily translate to the racing fans want to see.

Stock car’s governing body added a layer of traction compound called JP1 to the top groove of CMS this week in an effort to promote more passing at the Coca-Cola 600 coming up on Sunday.

The sticky substance is designed to promote better grip and has been used by NASCAR on Bristol Motor Speedway’s concrete surface, but never on an asphalt track like Charlotte.

“We talked through this opportunity with the track, teams, drivers and Goodyear,” NASCAR vice president of competition Scott Miller told The Associated Press in an email. “There was agreement that this process would enhance the racing we see at Charlotte Motor Speedway, and ultimately would make for an exciting Coca-Cola 600.”

Dale Earnhardt Jr. said the Charlotte track hasn’t aged well since it was last paved. The fastest part of the track remains the lower groove and that’s where drivers generally run.

“We just run right on the bottom because that’s just the fastest way. There is really no other way about it,” Earnhardt said.

The idea behind using the compound on the upper portion of the track is to create a sticky groove that is just as fast as the lower groove, luring drivers to attempt more passes up high.

Kevin Harvick, the pole sitter for the Coca-Cola 600, called it a good plan.

“The only groove that was there for the All-Star race was the bottom groove,” Harvick said. “I went up there and tried the middle and tried the top, and while you could go through there, you just couldn’t make any speed like you could on the bottom. … It’s definitely going to make a difference and hopefully it widens the racetrack out and we can have grooves all over the track.”

Earnhardt likes the idea, too. He just questions whether it will have an impact this week.

The JP1 substance typically works its best when the temperature is hot. Since the Coca-Cola 600 starts during the day but is run mostly at night, Earnhardt said the change could have more of an impact on the October race in Charlotte, which has been moved to a day race.

“Running this race during the day is probably the best decision,” Earnhardt said. “I’m looking forward to seeing how that works out for the track. I certainly think that’s a good thing so we’ll see how it works out.”

But Earnhardt expects drivers will try out the upper groove anyway, especially if it becomes difficult to catch the leader.

“I’m sure in the race some guys will get up there and start running through there, it’s going to improve the speed in those grooves. Hopefully it does,” Earnhardt said. “… We move all over the place looking for speed and grip (at Kansas). It’s a lot of fun.”