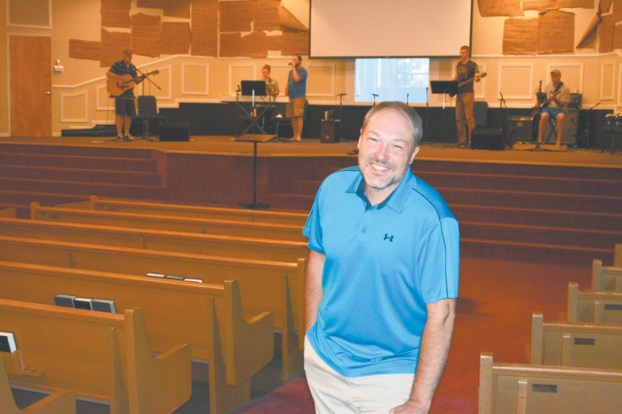 Jason Brilliant, who has taught Spanish in the Rowan-Salisbury school system for 18 years, will leave the teaching profession and become pastor of Grace Bible Church in Rockwell. Susan Shinn Turner/for the Salisbury Post

“The gifts he gave were that some would be apostles, some prophets, some evangelists, some pastors and teachers, to equip the saints for the work of ministry, for building up the body of Christ.” — Ephesians 4:11-12

Jason Brilliant has taken to heart the words of St. Paul in his letter to the Ephesians. In July, Brilliant, 41, who has taught Spanish for 18 years in Rowan-Salisbury Schools, will become a full-time pastor at Grace Bible Church in Rockwell.

“What we’ve tried to do here is to raise up people from within to serve,” Brilliant said. “God has gifted each person with certain talents and abilities.”

Brilliant is one of four elders who share preaching responsibilities. He considers the other three men his mentors. They are Joey Phillips, who is also a pastor; Steve Parker, a retired missionary; and Tommy Young, a lay minister.

“These guys have invested time and energy in developing me and other people,” Brilliant said.

While his training has been informal, he said, it’s been hands-on and high-quality.

“I think of it as the difference between being in public school and being home-schooled,” said Brilliant.

“If it were just me, I’d be overwhelmed,” Brilliant said. “Together, we can do this. The way that God is using us, we support each other. I’m excited about making this change. It’s time. I feel like this is the direction that God has taken me.”

“Homegrown leadership is the best-case scenario,” said Phillips, who has been pastor at Grace for 17 years. “Not only is it about knowledge, it is about knowing people and relating to them. That’s why we asked Jason to serve as an elder. We believe he has the qualities to serve.”

That’s why he was asked to be a pastor as well, he added.

Brilliant began his career as a Spanish teacher at Erwin Middle School. He taught there for five years and has been at East Rowan High School for the past 13 years. He graduated with a degree in Spanish with a minor in international business. His master’s degree is in Spanish language, literature and culture.

“In my adult life, I’ve only ever had two part-time jobs I’ve applied for,” Brilliant said. “With every other employment, God has brought it to me.”

He applied for jobs in his field but decided to apply to do substitute teaching in Cabarrus County “just to fill in the gaps.” But the Spanish teacher at Erwin quit right before school started, and the Rowan system called Cabarrus to ask for applicants. Brilliant got the job the same day. When the position at East Rowan opened, Kelly Sparger, then principal, approached Brilliant about that job.

His fellow elders talked to Brilliant about taking on the full-time role of pastor last spring when the position became available.

Brilliant had planned to pursue serving at church in some capacity when he retired from teaching.

“I did not see this coming, that I was going to stop in the middle of this career and change careers,” he said. “I wasn’t seeking it, but the opportunity came up. I had to think about that for a while. I’m leaving state benefits and the retirement system. My retirement won’t be as early now, either. So it was a big step to walk away from that.”

On the other hand, Brilliant said, he’ll have more flexibility in his new job. “I just think I’ll really enjoy that.”

On a recent Friday, he went fishing at High Rock Lake with the men of the church. Each fall, they travel to Topsail Island for fun, fellowship and flounder gigging.

“I really enjoy planning events like that — picking a project and seeing it through to completion,” he said. “We have a great group of people here. So many people are willing to jump in and make it happen.”

On a recent Sunday, the congregation held a fundraiser meal to send kids to camp this summer.

The church is also involved in mission work. This summer, two trips are planned — one to Haiti, the other to a Navajo reservation in Colorado. Last summer, the Brilliants traveled as a family to the Dominican Republic.

Brilliant had wondered how he could use his Spanish. But that soon became apparent when he went on three mission trips to Spanish-speaking countries.

“It has been really cool to connect with these people,” he said, “and it’s a new avenue for me to use my Spanish.”

The family Skypes with a Venezuelan family working as missionaries in the Dominican Republic. Brilliant is also trying to get a laptop for a Bolivian national who teaches at a Bolivian training center.

Brilliant and his wife had multiple conversations throughout the fall after he was approached to be a pastor.

“This is something we really do a lot of anyway,” he said of church work.

“The longer we’ve been at Grace, the more he’s been doing as far as ministry,” Michelle Brilliant said. “We have seen the way that God has been able to work a lot of things out with us.

“We have just felt very blessed with our lives,” she added. “God continues to grow us where we are. It started out for Jason as a love for students, and it’s turned into a love for children in ministry. And that’s getting to the heart of what we want to do — to relate with kids and instruct them in the Bible. Since we’ve had children, we’ve begun to see a need for children’s ministry.”

Michelle said she wants to support her husband because he supported her in her transition from a public school teacher to a home-school teacher.

Another experience that nudged Brilliant in the direction of the ministry is the fact that his son, Riley, is an eight-year brain cancer survivor.

“God has used that experience to grow our faith and help me trust him more,” he said. “When we see his provision, we can see his personal care and concern for us. The God who got me through that is not going to abandon me now.”

By Rebecca Rider rebecca.rider@salisburypost.com SALISBURY — As they donned blue graduation gowns, clutched their diplomas and flipped their tassels, seniors at... read more