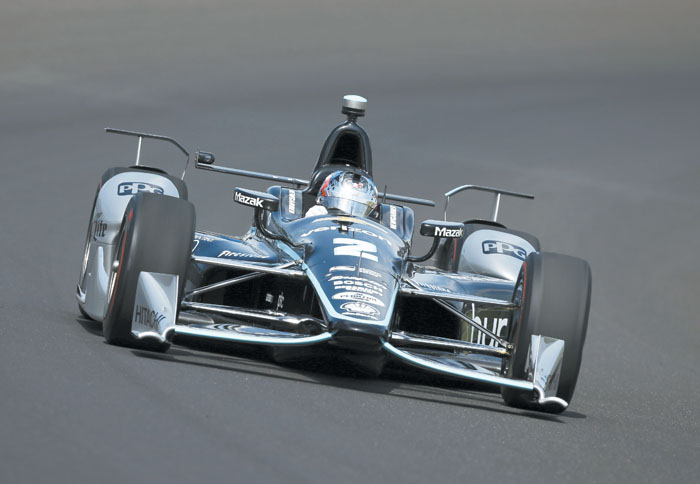 Josef Newgarden drives through the first turn during the final practice session for the Indianapolis 500 IndyCar auto race at Indianapolis Motor Speedway, Friday, May 26, 2017 in Indianapolis. (AP Photo/Michael Conroy)

INDIANAPOLIS (AP) — No one needs a spotter to see this coming.

With former Indianapolis 500 champions Helio Castroneves and Tony Kanaan in the twilight of their racing careers and possibly driving their final IndyCar season, the open-wheel series is on the verge of a fairly significant shift.

Even IndyCar officials are braced for the change, having created a “What’s Next” advertising campaign that puts several younger drivers in the spotlight.

Americans Josef Newgarden and defending Indy 500 winner Alexander Rossi as well as popular Canadian James Hinchcliffe are part of the push. So are Graham Rahal and Ryan Hunter-Reay. Throw in Conor Daly and there is no shortage of potential candidates to become the face and future of IndyCar.

Then again, there’s no guarantee any of them can fill the leading roles so long held by Castroneves and Kanaan. The duo has nearly 50 CART and IndyCar victories between them, including four Indianapolis 500 wins.

“You can see from their marketing who they are pushing,” four-time series champion Scott Dixon said. “They definitely have some good young talent. I don’t know how that will play out. But if you look at Newgarden, and I know they are pushing Conor quite hard. But I think in the racing community, the results are still a big deal.”

Winning is everything, or at least mostly everything.

Auto racing is unique in sports because it often requires a blend of talent and money. Some drivers have the talent and struggle to find the financial backing. Others bring all-important sponsors but can’t get to the winner’s circle.

“You see a lot of guys can maybe get one break in IndyCar, do a few races, but it’s very hard to stay here and work your way all the way up to being a consistent driver,” said Spencer Pigot, the 2015 Indy Lights champion who made his IndyCar debut last year. “It’s a very big challenge, but it is very rewarding if it pays off.”

The list of up-and-comers who have come and gone is lengthy and growing every year.

Sage Karam was once IndyCar’s next great hope, a Chip Ganassi Racing development driver who spent the 2015 learning the ropes from IndyCar champions Dixon and Dario Franchitti. He managed one podium finish in 12 starts as a rookie and one start since. Sebastian Saavedra, Wade Cunningham, Jay Howard, Raphael Matos and Tristan Vautier are just a few of the highly touted youngsters who have not really broken through in the big leagues.

But there’s hope on the horizon, mostly because there’s sure to be open seats and opportunity.

“There’s some guys that are on their way out,” Karam said. “I feel like there’s a lot of them that say this is your last year and then they just come back another year. If they’re still competitive, why not keep driving? There’s some guys in the next couple of years that are going to be out, so we’ll see.”

It’s unlikely that a youngster or rookie would win “The Greatest Spectacle in Racing,” but it happened last year when Andretti Autosport’s Rossi drank the traditional victor’s milk after winning on fuel mileage.

“Every time you’re in the car, you have a lot to prove,” said rookie Zach Veach, who is making his second IndyCar start. “You’re only as good as your last race.”

And with essentially three top teams — Chip Ganassi Racing, Andretti and Team Penske — the number of prime seats are few and far between.

“Does something have to change? Yeah,” driver Marco Andretti said. “I’d think somebody who wins an Indy Lights championship should have a better shot at a full-time ride. This is super competitive and every time they can show what they got, it’s important. Does something have to change? Probably. I just don’t know what. This business is always going to cost money. You need a support system. Sponsors.”

And a little luck.

“There’s so much work that goes into this behind the scenes that people don’t see or realize to put a car on the grid or put a driver in a seat,” Pigot said. “It’s not always about the best drivers and best cars. There’s a lot of guys who are good enough to be here and qualified enough to race the 500 and they aren’t, and it has nothing to do with their talent.”

UNC responds to 3rd set of NCAA charges in…