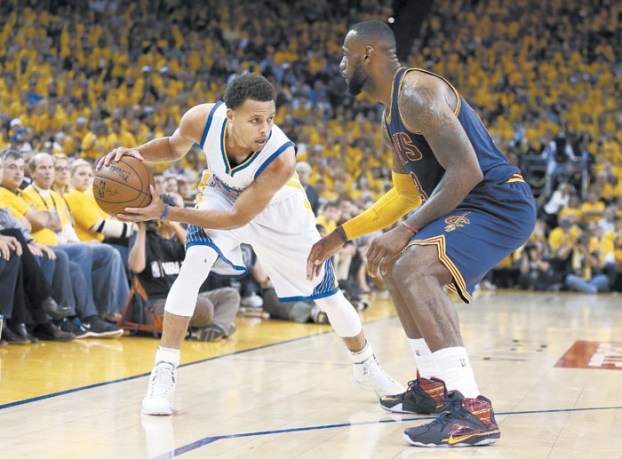 FILE - In this June 14, 2015, file photo, Golden State Warriors guard Stephen Curry, left, is guarded by Cleveland Cavaliers forward LeBron James during the second half of Game 5 of basketball's NBA Finals in Oakland, Calif. While there have been 14 rematches in NBA Finals history, this year's meeting between LeBron James' Cleveland Cavaliers and Stephen Curry's Golden State Warriors will be the first trilogy in league history. (AP Photo/Ben Margot, File)

While there have been 14 rematches in NBA Finals history, this year’s meeting between LeBron James’ Cleveland Cavaliers and Stephen Curry’s Golden State Warriors will be the first trilogy in league history.

After the Warriors beat the Cavs for their first title in 40 years in 2015, Cleveland got revenge last season with a comeback from 3-1 down to give the city its first major championship since 1964. Now they meet for the rubber match starting June 1 in Oakland.

While this may be unprecedented in the NBA, it has happened once before in the NFL, NHL and Major League Baseball with matchups that included some of those sports’ biggest stars.

There was Babe Ruth vs. Frankie Frisch in the 1920s and then a pair of memorable three-peat matchups in the 1950s featuring Otto Graham against Bobby Layne in the NFL and Gordie Howe against Maurice Richard in the NHL.

Here is a look at other major pro sports championship trilogies:

In his second season in New York, Babe Ruth led the Yankees to their first World Series berth in 1921 against the Giants. The entire series was played at the Polo Grounds, home to both teams that season. The Giants won the Series 5-3 in the final best-of-nine matchup as a banged-up Ruth got just one plate appearance during the final three games, all won by the Giants.

John McGraw’s Giants won the rematch the following year 4-0 with one tie before Ruth gave the Yankees their first title the following year to cap the first season at Yankee Stadium. Ruth had three homers in the Series, including one in the decisive sixth game. The big star for the Giants that year was future Yankees manager Casey Stengel, who hit an inside-the-park homer in the ninth inning to win Game 1 and drove in the only run in Game 3 with another homer.

These teams that have spent much of the post-merger days near the bottom of the standings were the cream of the crop in the 1950s led by star quarterback Graham and innovative coach Paul Brown in Cleveland and Lions Hall of Fame passer Layne and running back Doak Walker.

Detroit became the league’s third repeat winner in the championship game the following season when Layne threw a 33-yard TD pass to Jim Doran with just over 2 minutes remaining for a 17-16 victory.

The Browns came out on top the following year, ending a run of three straight title game losses (they also lost to the Rams in 1951). The Lions won the regular-season finale the week before the title game and scored first on a field goal by Walker.

But it was all Browns after that with Graham throwing three TD passes and running for three more in a 56-10 win.

The first matchup of this trilogy started with one of the most memorable in 1954. In a series full of megastars like Howe, Terry Sawchuk, Ted Lindsay and Red Kelly in Detroit and Richard, Jean Beliveau, Doug Harvey and Boom Boom Geoffrion in Montreal, it was an unsung player who became the hero.

In overtime in Game 7, Red Wings forward Tony Leswick got credit for the series-clinching goal when his innocent looking shot from the point was deflected by Harvey past Gerry McNeil for a 2-1 win 4:29 into OT. There hasn’t been a Game 7 overtime since in the Final.

The Red Wings won the rematch in an all home team seven-game series the following year. Howe set a record with 12 points in the round and Lindsay scored four goals in a Game 2 win. Richard missed the series because of a suspension for slashing Boston’s Hal Laycoe in the head and punching linesman Cliff Thompson. Detroit didn’t win another Stanley Cup for 41 years.

With Richard back, the Canadiens won the following year in five games with the Rocket getting the game-winning goal in the clincher. That was the first of a record five straight titles for the Canadiens.