Why in the world would we grow rhubarb? 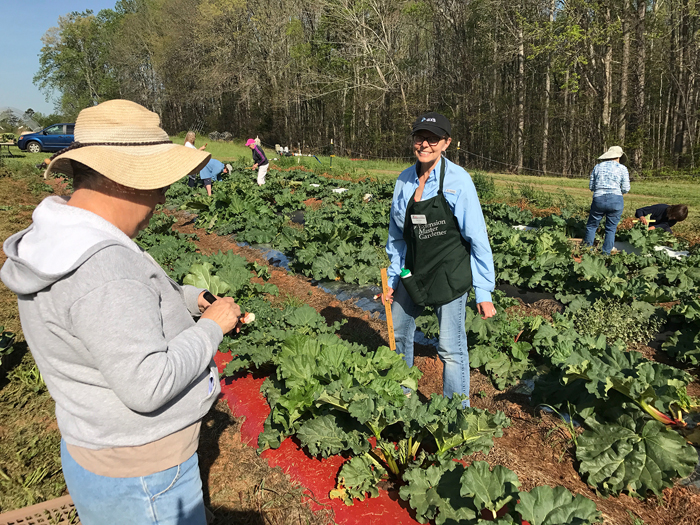 If you are born and raised in the South, you probably have never heard of or tasted rhubarb. And you have been missing out. Don’t have fear of missing out about rhubarb, just try it.

Rhubarb or Rheum rhabarbarum is herbaceous, edible perennial and a member of the buckwheat family. It is a native of Siberia and has been used as a medicinal plant in Asia for over 5,000 years. Up north, rhubarb is known as a “pie plant.” In Indiana, I grew up eating strawberry rhubarb pies and rhubarb crisps.

The edible portion of the plant is the stalk or petiole. The color of rhubarb stalks can vary from the commonly associated crimson red, through speckled light pink, to light green. Rhubarb stalks are poetically described as “crimson stalks.” The color results from the presence of anthocyanins, and varies according to both rhubarb variety and production technique.

The color is not related to its suitability for cooking: The green-stalked rhubarb is more robust and has a higher yield, but the red-colored stalks are much more popular with consumers. It’s very tart like a Granny Smith apple, with a crispy texture like a celery stalk.

The plant grows from large, fleshy rhizomes which are called a crown. The leaves are enormous and toxic because of their oxalic acid content. The poisonous rhubarb leaves have been used in flavoring extracts after the oxalic acid is removed. Oxalic acid can also be found in the stalks of rhubarb, but the levels are too low to cause any harm.

It’s too hot here in the Piedmont of North Carolina to grow rhubarb as a perennial. Rhubarb requires at least 500 hours of winter temperatures between 28 and 49 degrees for plants to go into rest period and produce an adequate amount of new leaf buds.

However, when summer temperatures exceed 75 degrees, plants become stressed and become more susceptible to root rot and bacterial diseases. As the number of people from the northern states that have moved to North Carolina has grown, so the demand for rhubarb has grown.

Danelle organized several on-farm tests of rhubarb in neighboring counties and at the station. With assistance from Hunter Barrier, a research specialist at the station, seeds were grown into transplants, and 1,500 plants were planted in September, along with the strawberry crop.

The idea was rhubarb would be harvested along with strawberries, making perfect ingredients for a pie. The rhubarb was grown on plastic with drip tape underneath. Red, silver, white and traditional black plastic were used to see if there would be a yield difference with the different colors. Harvest started in April, and the project ended this week. However, the plants could have had more stalks harvested through mid-June.

The preliminary results show that the best yields came from rhubarb grown on black and silver plastic. Rowan County Extension is not ready to make any large-scale recommendations for planting rhubarb, but we do see a niche market, especially for direct marketers and specialty markets. The growers who grew the rhubarb found the demand outweighed their supply and they are interested in growing rhubarb again.

Extension will be partnering with the Piedmont Research Station to grow rhubarb again for the 2018 growing season, and we hope to have answers to the many questions we have from this season. If you are interested in finding out more information about growing rhubarb, please contact the Rowan County Extension Center at 704-216-8970 or on the web at http://rowan.ces.ncsu.edu.