Salisbury Pediatrics employees wear Red Noses for a cause 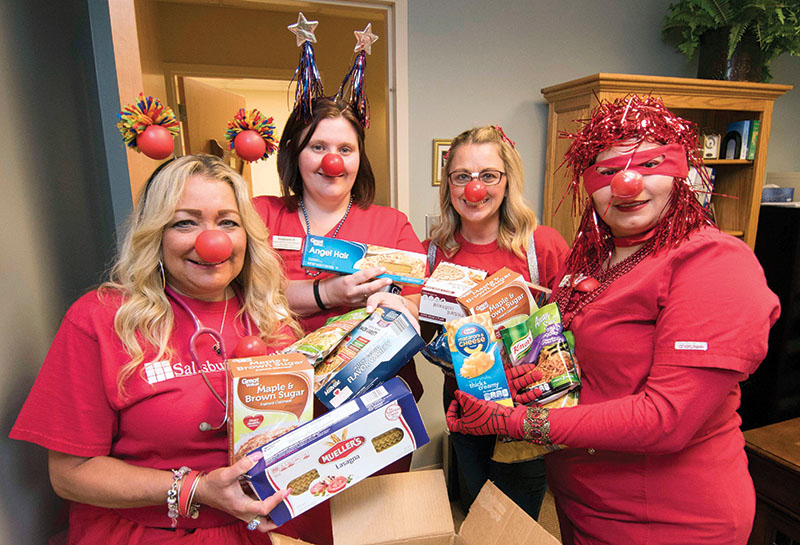 SALISBURY — All week long, the staff and doctors at Salisbury Pediatrics have been a little more colorful than most patients could probably recall, but they are doing it for a good cause.

Each staff member was encouraged to wear a red clown nose. To take it a step further, they could wear red T-shirts, silly costumes or red scrubs. Salisbury Pediatrics bought the noses at Walgreens, which supports Red Nose Day. Part of the proceeds from the sales of noses benefits Feed America.

The money raised through Red Nose Day also benefits Girls and Boys Clubs of America, provides access to water in Uganda and helps the Save the Children Foundation.

“We decided a few years ago — because we love children and any child who lives in poverty — we want to help,” said Dr. Chris Magryta.

The employees have participated in Red Nose Day for the past three years, but this year they wanted their contributions to mean something locally, said Alicia Shue, a clinical team manager and registered nurse at Salisbury Pediatrics.

Staff members could donate $5 a day to wear jeans this week and participate in an incentive raffle to win gift cards and prizes. The practice will match employees’ donations.

When the employees learned that the Rowan Helping Ministries pantry was low on food, they decided to add a food drive. Employees and parents have donated canned goods and breakfast foods such as grits and cereal all week. All of the items will support the food pantry.

The effort was so successful that the practice hopes to add a local component to Red Nose Day in the future.

Magryta encourages other businesses to participate in Red Nose Day and give back to the community. The two suggested a number of other worthy organizations including Food for Thought or the Community Care Clinic.

“Our goal is so that a child with not go without a meal,” Shue said.

Magryta said it’s in their best interest to help these children have better lives.

“We want to continue to give back, and we encourage others to do the same,” Dramer said.

Salisbury Pediatrics opened in 1955 and was formerly Salisbury Children’s Clinic.