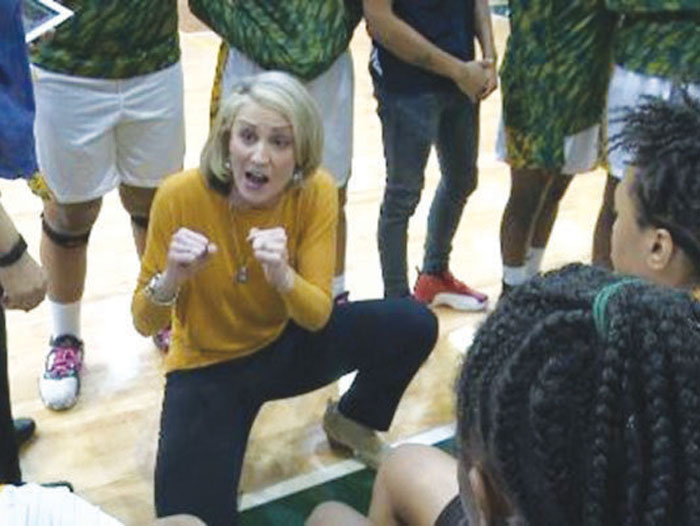 COLUMBIA, S.C — As great a player as she was for the North Rowan High girls program — she’s still third on the all-time scoring list with 1,555 points — Megan Honeycutt Assey’s finest achievements in basketball are going to come as a coach.

The 2000 North Rowan graduate finished her first season coaching the girls at Columbia’s Spring Valley High in February. The 35-year-old coach has been entrusted with maintaining excellence at one of the state’s elite programs. She was picked to follow one of the state’s coaching legends, Anne Long, who guided the Spring Valley Vikings to a 2016 state title before retiring. That was Long’s eighth state title, with the last four coming at the helm of Spring Valley.

“Following someone who’s like the Coach K or the Pat Summit of South Carolina girls high school basketball, you’re going to get scrutinized some no matter what you do,” Megan said. “But there are so many positives. There’s definitely a culture of winning here. You can set the goals very high, and the girls know how hard they need to work to be successful.”

Spring Valley moved up a classification in Assey’s rookie season, from 4A to 5A, and a star player went down with injury. A 20-7 record with a second-round playoff loss to Socastee wasn’t the debut Megan had dreamed about, but she was coaching a very young team. All things considered, it was a fine season.

Megan’s family keeps her grounded through thick and thin, and it helps to have a husband who is a coach. Charles Assey is the son of a coach and he guides the baseball team at White Knoll High in Lexington, S.C.

There’s also 3-year-old daughter Lawson. No loss is so tough that Lawson can’t bring a post-game smile to Megan’s face.

Coaching is what Megan has wanted to do since she was in the seventh grade at North Rowan Middle School.

“We had to do a school project that year on a possible career choice and I remember sending out letters to some coaches I knew about — Sylvia Hatchell at UNC and Cristy Earnhardt McKinney,” Megan said. “Cristy had played basketball at East Rowan (mid-1970s) when my dad (Stan Honeycutt) was playing for the East boys team. Both coaches sent me back these beautiful, hand-written letters encouraging me to follow my dreams. Those letters were a big reason basketball became my passion and a basketball coach was what I wanted to be.”

The Central Carolina Conference was a fierce girls basketball league during Megan’s days at North Rowan, playing for coach Gary Atwell. One of the CCC bullies, either Ledford or High Point Central, took the 2A state title annually.

“Our league was really strong and Rowan County girls basketball then was just so tough,” said Megan, who was the 1999 CCC Player of the Year.

A 5-foot-10 hustler, rebounder and shooter, Megan averaged 16.8 points as a North senior and headed to UNC Greensboro to continue her education and hoops career.

“It was Division I and it was right down the road where my parents could watch me play every home game, so it was a good place to go,” Megan said. “But I had to make adjustments, moving from the post to the wing and I was just shell-shocked for a while by the speed of the game. I learned a lot of lessons as far as perseverance. I didn’t play much the first two years, worked my way into the rotation as a junior, was starting games as a senior. That whole experience has helped me as a coach. I was that girl who didn’t play at all, the girl who played some, and the girl who played a lot.”

She played in 87 games for the UNCG Spartans. Her degree was in media studies.

When she graduated from college, Megan wasn’t sure what was next. She didn’t know how to get her foot in the coaching door. She took a 9-to-5 corporate job with a financial services firm, but she missed basketball so much it hurt.

Fortunately, McKinney was hired as the head coach at Clemson University, and she’d been following Megan’s career at UNC Greensboro.

“She called my parents first,” Megan said. “She asked them if I still wanted to coach, if I’d be interested in being a graduate assistant for her at Clemson. She was reaching out to me.”

McKinney didn’t have to ask twice.

Megan did a little bit of everything at Clemson, working camps, recruiting, editing game tape. The hours were long, but she earned a masters degree and picked up two years of valuable basketball coaching and administrative experience.

Next came a stint at Charleston Southern University working as an assistant for coach Julie Goodenough. That put her directly into player development. There were increased recruiting responsibilities, and she served as travel coordinator and academic liaison.

“Our lives were pretty crazy as assistant coaches, but he asked me out to dinner one day and I said, ‘Ah, why not?'” Megan said.

Wedding bells rang eventually. That brought a desire for a more stable lifestyle with less travel. The high school coaching ranks offered a solution to a lot of  problems.

“From a financial standpoint and in a lot of other ways, teaching and coaching high school was a no-brainer,” Megan said.

Her first season as a high school hoops coach was spent at Brookland-Cayce High in Cayce, S.C.

Next there were three seasons at River Bluff High in Lexington, S.C., where she was recruited by the football coach/athletics director David Bennett, who had been coaching the Catawba College football team during Megan’s days at North Rowan.

The opportunity to take on the challenge of Spring Valley High came her way in June, 2016. Megan was quick to embrace it.

“I was fortunate to play for great coaches and to learn from great coaches along the way,” Megan said. “I always wanted a life in basketball, and I’m thrilled with how things worked out.”