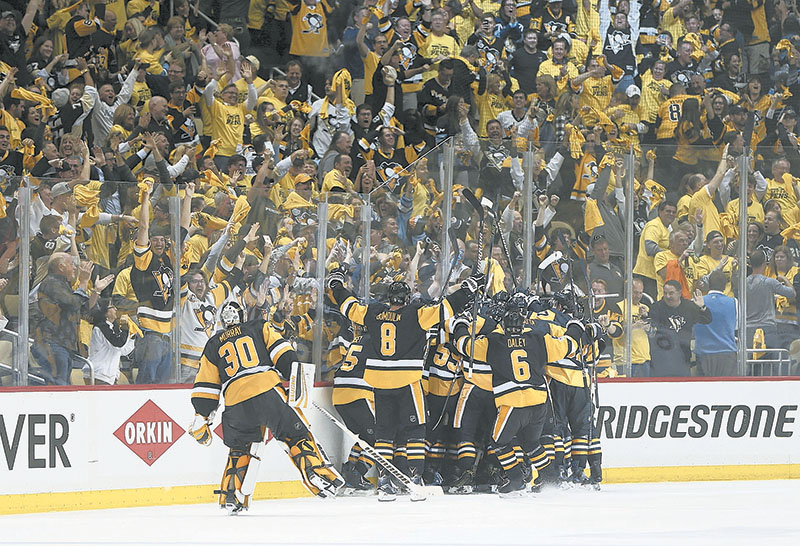 Pittsburgh Penguins players and fans celebrate after the Penguins' Chris Kunitz scores a game winning goal in the second overtime period of Game 7 in the NHL hockey Stanley Cup Eastern Conference finals against the Ottawa Senators, Thursday, May 25, 2017, in Pittsburgh. The Penguins won 3-2. (AP Photo/Keith Srakocic)

By Will Graves, AP Sports Writer
PITTSBURGH (AP) — The Pittsburgh Penguins are heading back to the Stanley Cup Final.
Chris Kunitz beat Craig Anderson 5:09 into the second overtime to give the defending champions a 3-2 victory over the Ottawa Senators in Game 7 of the Eastern Conference final Thursday night.
Kunitz scored twice, his first two of the playoffs. Justin Schultz added the other in his return from an upper-body injury, and Matt Murray stopped 28 shots on his 23rd birthday.
The Penguins are trying to become the first team since the Detroit Red Wings in 1998 to win back-to-back titles. They will host Western Conference champion Nashville in Game 1 on Monday night.
Mark Stone and Ryan Dzingel scored for Ottawa. The Senators rallied twice to tie it, with Dzingel making it 2-2 with 5:19 left in regulation.
Craig Anderson made 39 saves, but couldn’t get a handle on Kunitz’s shot from just outside the left circle. The Senators are 0-6 in Game 7s in franchise history.
The Senators forced a return trip to Pittsburgh — where they lost 7-0 loss in Game 5 on Sunday — by leaning heavily on Anderson in a 2-1 Game 6 victory, putting both teams at odds with history.
Ottawa came in 0-for-25 years in winner-take-all games, while the Penguins were 0-7 in Game 7s at home in series in which they also dropped Game 6.
Ottawa coach Guy Boucher told his resilient team to not get caught up in the big picture but instead focus on the small ones, a recipe that carried the Senators throughout a bumpy transition under their first-year head coach to the brink of the franchise’s second Cup appearance.
The Penguins, trying to become the first defending champion to return to the finals since Detroit in 2009, came in confident they would advance if they could replicate their dominant Game 6, when they were undone only by Anderson’s brilliance.
Pittsburgh has been nearly unflappable in the face of adversity under Mike Sullivan, going 12-2 in playoff games following a loss over the last two springs. He encouraged his team to “just play,” code for fighting through Ottawa’s neutral zone-clogging style and the bumping, grabbing and pulling that comes along with it.
A chance to play for their sport’s ultimate prize on the line, the sheets of open ice the Penguins found so easily in Games 4-6 closed up. For most of the first 30 minutes, loose pucks hopped over sticks to spoil some scoring opportunities while Anderson and Murray gobbled up the rest.
Kunitz, relegated to the fourth line since returning from injury in the second round, picked up his first postseason goal in a calendar year when he completed a two-on-one with Conor Sheary — a healthy scratch in Games 5 and 6 — by slipping the puck by Anderson 9:55 into the second period.
The momentum lasted all of 20 seconds. Ottawa responded immediately with Stone — who stretched his left skate to stay onside — fired a wrist shot that handcuffed Murray.
Pittsburgh kept coming. Schultz, returning after missing four games with an upper-body injury, zipped a shot from the point through Kunitz’s screen and into the net with 8:16 left in the third.
Once again, the Penguins could not hold the lead. Dzingel set up at the right post and banged home a rebound off Erik Karlsson’s shot that hit the left post and caromed off Murray’s back right to Dzingel’s stick.
NOTES: The home team is 21-20 in overtime Game 7s in NHL playoff history. … Pittsburgh F Patric Hornqvist skated during warmups, but was held out of the lineup for a sixth straight game with an upper-body injury. … Karlsson had 16 assists in the playoffs to set a team record. … The Penguins are 10-7 in Game 7s. … It was the fifth one-goal game of the series.
___
More AP NHL: https://apnews.com/tag/NHLhockey