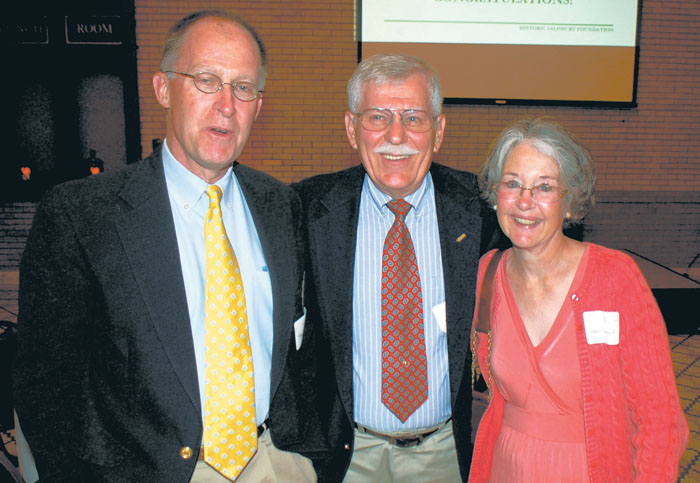 Mark Wineka/Salisbury Post Rich Dietrich, middle, was honored as the Doug Black Volunteer of the Year Thursday night at Historic Salisbury Foundation's 2017 Preservation Awards. With Dietrich are Steve Cobb, vice president of the HSF board, and Rich's wife, Lindsay.

SALISBURY — In the past two years, it seems as though any project Historic Salisbury Foundation had that involved manual labor, Rich Dietrich was there, pitching in.

It could be simple or complex, clean or dirty, but Dietrich was the man.

HSF President Susan Sides says when the foundation staff was culling through pictures on various projects such as the Lynch-Nicholson House, the Ice House, the restoration of the Texas steam locomotive and various Salisbury Station improvements, Dietrich kept showing up in the photographs.

“He is the team player’s team player,” Sides said Thursday night at the foundation’s 2017 Preservation Awards dinner at Salisbury Station.

Dietrich received the Doug Black Volunteer of the Year Award on a night that honored community, commercial and private preservation projects, educational efforts for history and volunteers such as Dietrich.

A special award went to Steam Operations Corp. and the Atlanta History Center for the restoration of the Texas, an 1856 steam locomotive that was refurbished over the past two years in the Back Shop at the N.C. Transportation Museum in Spencer.

In recent weeks, it has returned to its permanent display space at the Atlanta History Center.

Four significant community preservation projects received HSF awards, including restoration work at the Bell Tower, renovations of the Back Shop at the Transportation Museum, the city of Salisbury’s BlockWork 2016, and the rescue and bringing back to life of the Neely School.

The small 1908 schoolhouse, moved and preserved by the Historic Neely School Foundation, is thought to be Rowan County’s oldest surviving one-room school built for African-Americans. Before it closed in 1948, some 1,400 children in grades one through seven had attended Neely School. It is at 229 Neelytown Road.

BlockWork 2016 and all the partners involved were successful in providing four new roofs, reworking six facades, and cleaning and landscaping two blocks in the West End near Livingstone College.

More than 200 volunteers were involved.

The Back Shop restoration has given the Transportation Museum a new exhibit space that is 150 wide and 600 feet long. When it was used by Southern Railway in its heyday, the building might see 12 locomotives being repaired in it at one time.

When it was constructed in 1905, it was considered the state’s largest industrial building.

Hobson called it “an immense and spectacular place.”

Contractor Alfred Wilson and his team rebuilt the structural framework of the 1892 Bell Tower in a challenging and often dangerous project. Among many other things to ensure the tower’s continued survival, the work provided the proper load distribution, allowing its bell to be rung at New Year’s for the first time in many years.

• The Leo Wallace Sr. House on West Fisher Street, which has been renovated by Steve and Sherry Beck.

• The Kritzer-Hatley House at 433 S. Carolina Ave. in Spencer, restored by Forrest and Marie Clanton.

• The former Quick As a Wink dry cleaning building at 323 W. Harrison St., restored to become a residence by Clyde and Lewellyn Padgett.

Under the category of preservation education, two men were singled out for awards: Chris Hartley, author of  “Stoneman’s Raid, 1865,” and Gary Freeze, a Catawba College history professor and author who for 10 years in the Rowan County History Course has spoken on the period between 1799 and 1839 and also on the era of Reconstruction as much of the state moved from an agrarian to industrial society.

Other volunteers recognized Thursday included the people behind the 10-year success of the Rowan County History Course, a 10-week class. It is a joint project of HSF and the Rowan Museum.

Many of the docents have logged 1,000 hours giving tours at the 1820 Hall House, a house museum owned by HSF.