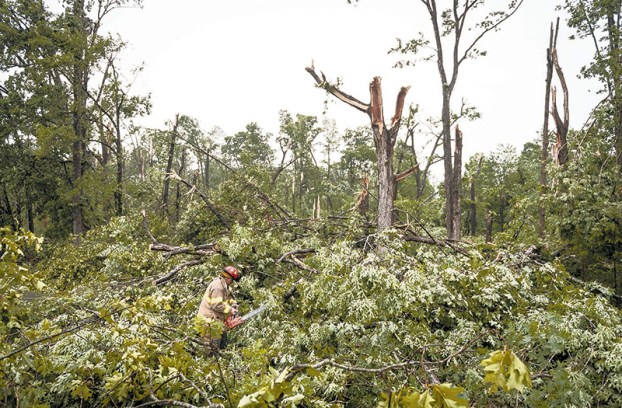 A firefighter clears debris from Courtney-Huntsville Road after severe storm moved through the area on Wednesday in Courtney, N.C., in Yadkin County. Possible tornadoes flipped mobile homes, toppled trees and damaged a gymnasium as a series of storms rumbled through North Carolina on Wednesday, officials said. Andrew Dye/The Winston-Salem Journal via AP

Residents cleaning up after storms in Iredell, Davie and 2 other counties

CHARLOTTE — Cleanup is under way in central North Carolina after tornadoes hit the state for a second day.

At least four people were hurt in the storms in Iredell, Davie, Yadkin, Stokes and Union counties Wednesday.

More than 700 people were without electricity Thursday. Dozens of homes were damaged as the storms knocked over trees and power lines

The gym at Courtney Elementary School in Yadkin County lost its roof and two walls. Emergency Management Director Keith Vestal said about two dozen students and teachers took cover in the school next to that gym. No one was hurt.

A survey team from the Weather Service office in Greer, South Carolina, confirmed an EF-1 tornado touched down southwest of Monroe in Union County. The team found damage to a few structures, including a barn that had its sides and most of its roof torn off.

The Greer survey team confirmed that damage in Iredell County was the result of a tornado.

A tornado hurt several people in Sampson County in eastern North Carolina on Tuesday, tearing the roof off the fire station in Autryville and damaging mobile homes.