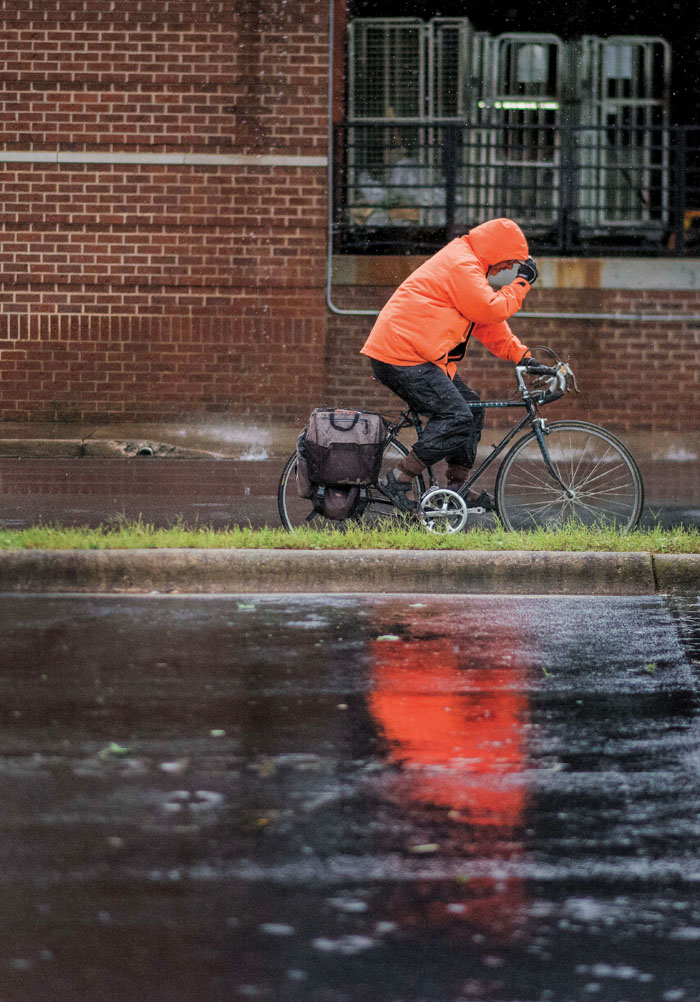 JON C. LAKEY / SALISBURY POST A bicyclist rides along Church Street in Salisbury as the rain fell on Wednesday afternoon.

There were no immediate reports of injuries as the storms headed east.

The Statesville Record & Landmark reported at least two mobile homes were destroyed in a portion of Iredell County. Video coverage showed numerous trees toppled and there are multiple reports of property damage near the Davie County line.

Some of the trees blocked local roads, and power lines were down as well. Debris was scattered in the storm’s wake.

The National Weather Service reported a storm with rotation was spotted near Troutman, south of Statesville, and moved east toward Cool Springs.

In Yadkin County, the Winston-Salem Journal reported a gymnasium at Courtney Elementary School suffered severe damage. Pictures and video showed bricks scattered on the basketball court, the end walls blown out and half of the roof missing.

Motorists were redirected because of the damage, and emergency officials said trees that fell across roads hindered personnel in getting to some areas.

The severe weather outbreak began in eastern North Carolina, when a tornado caused damage in Autryville in Sampson County.

A state of emergency was in effect for Autryville after the tornado with winds of 110 mph damaged the fire station and several mobile homes Tuesday.

Sampson County Sheriff Jimmy Thornton said one man was treated by emergency personnel after suffering minor injuries when a mobile home overturned. Thornton said all other injuries were scrapes and bruises. JON C. LAKEY / SALISBURY POST A couple shares an umbrella to shield themselves against the rain that was falling on Wednesday afternoon in downtown Salisbury.

In Rowan County, storms with heavy rain prompted the National Weather Service to issue flood warnings Wednesday. Late in the afternoon, a tornado warning was issued for the county.

Today’s forecast is for a 50 percent chance of showers and thunderstorms with a high of 72 and west southwest wind at 7 to 11 mph, gusting up to 18 mph. Thursday night will be mostly cloudy, then clearing, with a low of 55.

On Saturday, there’s a 30 percent chance of afternoon showers and thunderstorms, with mostly sunny skies and a high of 85.

Sunday brings a  50 percent chance of showers and thunderstorms with a high of 86.

On Monday, Memorial Day, the forecast is a 30 percent chance of showers but  mostly sunny with a high of 84.

Catawba College Will offer a pre-licensure nursing program in…