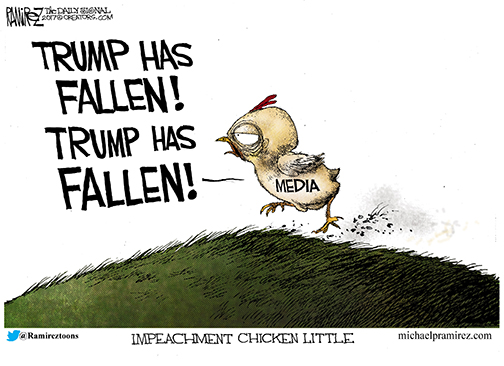 The focus shouldn’t be on impeachment. It must be on confronting existential threats to our republic from adversaries seeking a downfall from within.

Russian interference with the 2016 presidential campaign is the concern. We dare not distract ourselves from what happened in the last election whether or not our president was directly involved.

The U. S. intelligence community, consisting of 17 agencies, reaffirmed its early January 2017 conclusion that senior Russian officials sponsored the hacks into the Democratic National Committee and emails belonging to Hillary Clinton’s associates. It was confirmed last week that Vladimir Putin ordered an intelligence operation against the U. S. presidential campaign to help Donald Trump win the White House.

Trump is doing exactly what he said he was going to do — make this country safer by taking measures against ISIS. The liberals are the ones drawing party lines.

If Hillary had been president and was disrespected the way Trump is, people would be arrested left and right. Let the president try and do his job.

If Hillary had won the election, most Trump supporters would still be talking about her emails.

“The justices split 5-3 on the other district, District 12 in the southwestern part of the state. Justice Clarence Thomas joined the four liberal justices to form a majority. Chief Justice John Roberts and Justices Samuel Alito and Anthony Kennedy dissented. Justice Neil Gorsuch did not take part in the case.”

Thankfully, I was seated when I read this, or I would surely have fainted. Will the wonders never cease? Somebody play Etta James’ “At Last.”

The GOP way! Let banks make all they can on the back of the consumer.

Isn’t this more aptly called “trickle down” banking? Banks are the only ones advocating for this change. Retailers are not. Consumers are not. Small businesses are not.

Let’s stop calling Dodd Frank and the Durban Amendment a “regulation” and start calling it what it is — a protection. It is time to repeal and replace Ted Budd

I can’t believe we are still being sold “trickle down economics.” It’s infuriating. We already know it’s not a real plan. It’s already failed, no reason to see the rerun.

No, I don’t care to wait and see or give it another chance. Budd is supporting drilling platforms off the N.C. coast. He sent me a letter in response to my concerns. Nice of him to reply that my concerns are not his.

… A popular pop: Cheerwine holds the party of a century

I love Cheerwine. I love Salisbury. It tastes like tradition, my hometown.

Take a sip and I’m home.

Glad to see so many people enjoying Cheerwine, life and Salisbury, N.C. My heart will always be there.

Salisbury needs to take note of this event. Would be great to do a downtown festival every year and call it Cheerwine festival. It might turn quickly like the Barbecue Festival in Lexington. The crowd for this surprised me in turnout.

Had a great time. Where can I get 100 anniversary T-shirt? Line was way too long.

Great day for our community! Thanks to all who made it happen. Also shows Salisbury could support a spring street fair.

Salisbury Indivisible — Salisbury is being divided more by this group.

The strength and commitment of this group of North Carolinians cannot be underestimated. Thank you, Salisbury Indivisible!

Well, there are always two sides to every social issue.

I love what Mr. Warren stands for and can vouch for his integrity.

To see a group of liberals defacing him or throwing verbal hate his way is so un-American. He is a dad and husband — an honest, working man.

To label him like this for a political agenda is just wrong.

Do you think I liked Hillary or Obama or a local liberal? No, so I go vote and carry on with my life. I guess giving yourself a team name and logo makes y’all powerful. Keep it up, maybe call yourselves the Cleveland Browns.

Thank you for your research and for sharing the rich history of the Aggrey family. I appreciate the details in your article that more fully depicts the life of Dr. James Aggrey, the great educator. …

I’m delighted to learn details of his family life and that Dr. Aggrey’s life and achievements are further memorialized by his depiction on Ghana’s currency as the nation commemorates 60 years of independence.

Mrs. Abner Aggrey Lancaster was one of my favorite teachers at J.C. Price High School. She, in fact, wrote the lyrics to our school song.

It was a sincere pleasure to read about the tremendous accomplishments of her ancestors, who clearly impacted her life, allowing her the opportunity to help shape the lives of her students.

Thank you to the Salisbury Post for this uplifting story.

I know two of these young men; one of them I am totally surprised by. … These kids nowadays believe they can do anything they want and get away with it. … When you are old enough to start committing adult actions, you should face adult consequences.

Two of them are under age 18. I’m sure they didn’t know what they were doing, since they are that young. Let us be sure we get them some help, instead of prosecuting them in adult court, so they will realize the folly of their ways and what they set out to do.

I’m just as sure as I can be that when that’s explained to their juvenile mind, they will, without hesitation, turn over a new leaf and forevermore refrain from such folly.

Where were the parents of the 16- and 17-year-olds? They should be charged along with their sons for this crime. These teens should have been at home preparing for school the next day. If they are not in school, why not? The 18-year-old will have to stand for himself.

Perhaps if we spent more time and money building up the youth of our community instead of expecting the worst and garnishing it with hate, things would go in a different direction.

Prison is not the answer. But then I wonder, what do we really want — an answer of hope. It is just easier to condemn and toss away, expect the worst and then say, “Well, I told you” — a true coward’s way.

… Cokie and Steven V. Roberts: Critics of the world, unite!

Cokie and Steve, many of us hear you, and our numbers are increasing. Vice President Pence, with his holier-than-thou mask, may not be the perfect alternative, but at least he has experience as a statesman.

… Savannah Morgan: A change of perspective on the race to be valedictorian

Ms. Morgan’s words show that she has listened, heard and thought about the merits of the other perspectives. She has added her own personal and intelligent perspective, without screaming that she is right and everyone else is wrong. Oh, that we could all discuss our issues in such a manner.

No matter where that bar is set, you will have someone just on the outside of making it over feeling the stress and disappointment you’ve described.

Let’s go even further with the top 5 percent in a class of 300 scenario. You will have those No. 16-20 students who will want to make it over the bar, so they’ll reject the classes they love to take the GPA-boosting classes. The students in the No. 10-15 spots will, of course, have to sign up for the GPA boosters as well to protect their position. This, of course, would push those in the top 10 to do the same to protect theirs. You haven’t fixed a problem, you’ve simply moved it further down the chain.

The wider-brush Latin honors system is much more appropriate, especially when a certain standard is set, and anyone who achieves that standard earns the honor. Couple that with the traditional valedictorian/salutatorian rankings and you have a balanced system that still gives accolades where appropriate. Then that standard could be made to include your top 5 percent, along with others.

You are correct in that there is no perfect solution. But the school board has made a fair and balanced decision that gives much flexibility but maintains traditional accolades.

We had a window fan in the hall that probably ran from May through September. Trees were planted in locations to provide afternoon shade on your house.

Praying for you guys. Keep up the faith, and God will take care of you.

I truly hope and pray there is justice one day for little A’yanna and her family. This story continues to break my heart.