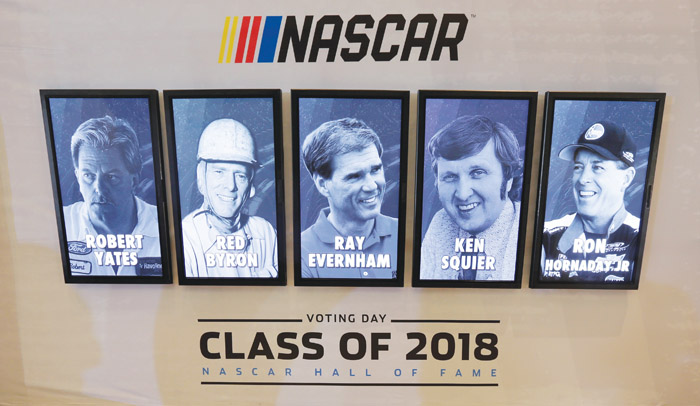 It turns out his professor was wrong.

Yates’ 40-year career in auto racing culminated with his selection to the NASCAR Hall of Fame on Wednesday, an achievement that left him in tears.

The 74-year-old Yates admitted he wasn’t the smartest guy, but said “I knew how to work on cars.”

Yates, a NASCAR Cup champion as both an engine builder and owner, was voted in along with three-time NASCAR Cup championship crew chief Ray Evernham, drivers Red Byron and Ron Hornaday Jr. and broadcaster Ken Squier. Hornaday and driver Alan Kulwicki tied for the fifth and final spot, and Hornaday won the tiebreaker.

Yates was an overwhelming favorite, selected by 94 percent of the voters.

He grew up in Charlotte and couldn’t play baseball and football because of a heart murmur.

“So I worked on engines,” Yates said.

While Yates’ passion was engine building, he achieved most of his notoriety as an owner, with his drivers winning 57 Cup races.

After providing the power behind Bobby Allison and Cale Yarborough with his engines, he started his own racing team in the late 1980s.  Success came quickly with driver Davey Allison winning the 1992 Daytona 500, while finishing third in the standings. Dale Jarrett would win two more Daytona 500s and a Cup Series championship for Robert Yates Racing.

Yates is currently battling liver cancer, but said being selected into the Hall of Fame left him feeling like grabbing a jack, jumping over a pit wall and changing a tire.

“I may not sleep a wink,” he said with a wide smile.

NASCAR vice chairman Mike Helton said Yates could do it all and is well-liked in the garage.

“Having watched him from an engine builder to a crew chief to a car owner and a tutor to so many families in the sport, the contributions he has made to NASCAR — we will never be able to count them all,” Helton said

Evernham earned his fame as a crew chief.

He became synonymous with Jeff Gordon when they began working together in 1992. Evernham guided Gordon and the Rainbow Warriors team to Cup titles in 1995, ‘96 and ‘98. Under Evernham, the No. 24 team excelled on pit stops, becoming the envy of other NASCAR teams as they dominated the 1990s decade by winning a series-leading 47 Cup races.

Evernham was having dinner with his wife in Indianapolis when he learned of the news.

“My wife got a really big smile on her face and she said, ‘You’re in,’” Evernham said. “The emotions overwhelmed me and I have been at a loss of words since. I have never felt as overrun by emotions in my life. … This is the biggest thing that can happen in your career.”

Byron won NASCAR’s first race in 1948 on the Daytona beach and road course and went on to win NASCAR’s first championship. Byron was wounded in World War II and drove with a special brace on his pedal.

Squier, who became the definitive voice of NASCAR, called Byron “an American hero.”

“After he got shot up so bad in the war they wanted to take his leg off and he said, ‘Thank you, I’ll keep it,’” Squier said. “He became a champion who represented everything this Memorial Day weekend is all about.”

Seven-time Cup Jimmie Johnson and Kevin Harvick were among the many young drivers who attribute Hornaday to helping them get their start in NASCAR. Hornaday let a number of drivers, including Johnson and Harvick, sleep in his couch at his Charlotte-area home while they were getting started in the sport.

“We moved and the only thing I saved was that couch,” said Hornaday, who has won four Trucks Series championships during his career. “People say why and I said, ‘Because everybody was always too drunk to go upstairs and they would always pass out on that little couch, the closest one to the door.’”

Jim France, the current chairman of International Speedway Corporation and son of NASCAR founder Bill France Sr., won the Landmark Award for his contributions to NASCAR.

The induction ceremony for the Class of 2018 will be in January in Charlotte.