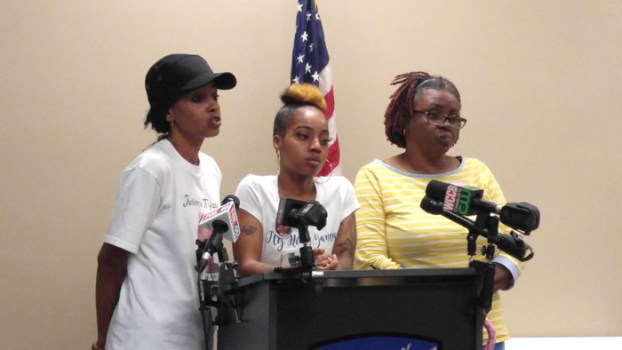 The mother and grandmothers of A'yanna Allen speak about how last few months have been since her death. Shavonne Walker/Salisbury Post

SALISBURY — The family of A’yanna Allen hopes that a planned billboard on West Jake Alexander Boulevard will help catch the child’s killer. The billboard will feature a photo of 7-year-old A’yanna along with information about where to call and the $20,000 reward that is still being offered.

The billboard will be in both English and Spanish and will remain in place for several months.

Shequita Woodberry, the mother of the young girl, said at a Wednesday news conference that she loves the idea of the billboard.

“I just really wish they would be honest and come forward. Let us know. Right now, they aren’t saying nothing,” Woodberry said.

“That was a child. That was my child that they took from me. And I gotta go visit her at a grave. I have no business burying my child. She should be burying me,” Woodberry said, wiping away tears.

She said the past six months “have not been easy.”

And to the person who killed her daughter, Woodberry said, “You may not get caught today, but you’re going to get caught sooner or later.”

Her mother, April Woodberry, also spoke, declaring that the killer will be caught.
A’yanna’s paternal grandmother, Shirley Robinson, spoke about how being at her home isn’t the same anymore and her other grandchildren are afraid to stay with her because they fear they will be shot too.

A’yanna, a second-grader at Koontz Elementary School, was asleep in a bedroom with Robinson when someone sprayed the front of the house with bullets. A’yanna was struck multiple times and died at the scene. Robinson was shot in the leg.

Sharod Raheen Mathis, 22, was shot Dec. 4 while in the parking lot of Firewater restaurant and lounge after an altercation there hours before the shooting death of A’yanna. He was taken to Novant Health Rowan Medical Center by private car and later died. Salisbury police officials have said the two shootings are connected.

Police Chief Jerry Stokes said if someone who may have seen something in the Mathis shooting would come forward, he is confident it would lead to information about A’yanna’s death.

“If somebody knows something and they aren’t immediately contacting us with that information, to know what this family has experienced, I hope that they don’t sleep at night just like A’yanna’s grandmother doesn’t sleep at night because of this,” Stokes said.

He encouraged anyone who has “seen something to say something.”

“Immediately after the shooting at Firewater, police detectives were able to identify several witnesses and have come to know over time there were dozens, if not 100, witnesses that were at Firewater that night,” Stokes said.

He said it’s those additional witnesses that police investigators really need to identify and can help the investigation move forward.

An autopsy was conducted Dec. 5. The report released in February showed the A’yanna suffered 20 gunshot wounds to her toes, back, torso, head, legs and other areas. The autopsy revealed as many as 13 shots that included penetrating wounds and superficial or grazing wounds.

Three days after the shooting, the city and county joined together to offer a $20,000 reward for information leading to the arrest and conviction of people responsible. No one has come forward with information that has led to an arrest, but police are hopeful the billboard will help.

Anyone with information is asked to contact the Salisbury Police Department at 704-638-5333 or Salisbury-Rowan CrimeStoppers at 866-639-5245 or online via tips.salisburyrowancrimestoppers.org.

By Rebecca Rider rebecca.rider@salisburypost.com SALISBURY — For many students, becoming a published author is a dream. But for a group of... read more