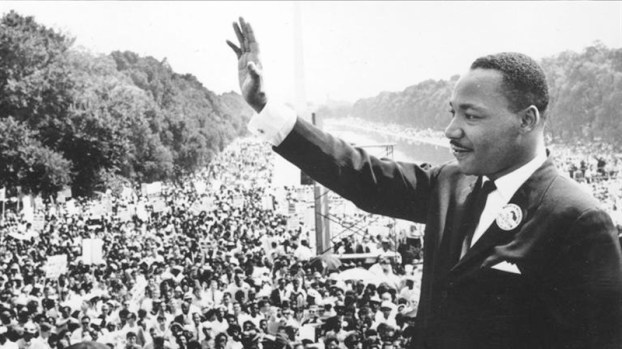 Dr. Martin Luther King Jr. is in the art that I create, in the words that I compose and in the steps that I take to ensure my future — steps that I would feel little motivation to achieve if I didn’t daily remind myself of the struggle that granted me the opportunities that I’ve been given. The struggle that King — and many others, named and not, in textbooks that shortchange our history — endured to advance the fight for equality that persists to this day in movements as expansive and mobile as Black Lives Matter and as minute as one determined voice amongst ignorance en masse.

As an artist, it is essential — at least in my personal experience — to create in the proper atmosphere and headspace in order to produce quality work. It takes more effort than it should these days to center myself in such a fashion; however, when I do, I think of several things all at once: my father and what he would think of it; my inspiration, ideas or point of reference; and, of course, the blessing and privilege with which I’ve been gifted to be able to enjoy these pursuits with little fear of my work being minimized or shunted to the side.

King said, “I look to a day when people will not be judged by the color of their skin, but by the content of their character.”

I strive to etch strokes of my character into the lines of my creations. A world where people can see that and not solely what I look like is one that I can somewhat reasonably say I live in. That isn’t to say everything to be done has been, but there are some victories that we can celebrate by merely being our true and natural selves.

I also recognize the freedom I’ve been gifted to speak my mind freely to the public without censorship. The greats were censored because they had a message to convey that oppressive forces feared would inspire insurrection of their coveted status quo. King was no stranger to this censorship, and he — among many others — was spied upon by the government to prevent such a thing from happening. We know this. We all do now, especially in the heated socio-political climate that we find ourselves in currently, in which we scrape and search for all manner of evidence of the subjugation and injustice committed against our predecessors.

Unlike before, in King’s day, when the “white moderate” would sit idly and wait for the conflict to blow over and return to forced and false peace, I can stand and speak. It will be heard, recorded, broadcast for the world to see. And if I’m shot down, my diverse generation will rise up like the tide behind me and rally for justice in far greater waves than ever before.

I will remember King when I apply for college; I will rejoice in the fact that my acceptance will be determined by my academic achievement and not my race, gender or background; I will be grateful that it’s considered just for me to be granted the same opportunities as anyone else, and unjust if this is challenged in any way, shape or form.

I remember King by living my life. I can make mistakes and be imperfect, and it won’t be attributed to my being African-American, but rather to my being human, as we all are — as Martin Luther King was.

And in doing this, I not only embody the dream that he so passionately described, but further its progression in every freely made expression of my creativity, burgeoning sense of character, and empathy and participation for and in the ongoing fight for the ultimate equality of all people — of every color, ethnicity, gender, sexual orientation and background.

Deborah Smith, a high school junior, presented this essay at Let’s Get Connected Day. She is a writer and cartoonist — and a faithful wearer of t-shirts and jeans. She lives in both Charlotte with her mother, Yashica Belfour, and in Salisbury with her father, Pastor Anthony Smith of Mission House.

Letter: The grab for power

Thank you for the excellent editorial in today’s Post (“Again, NC goes too far,” in Wednesday’s paper). The gerrymandering and... read more