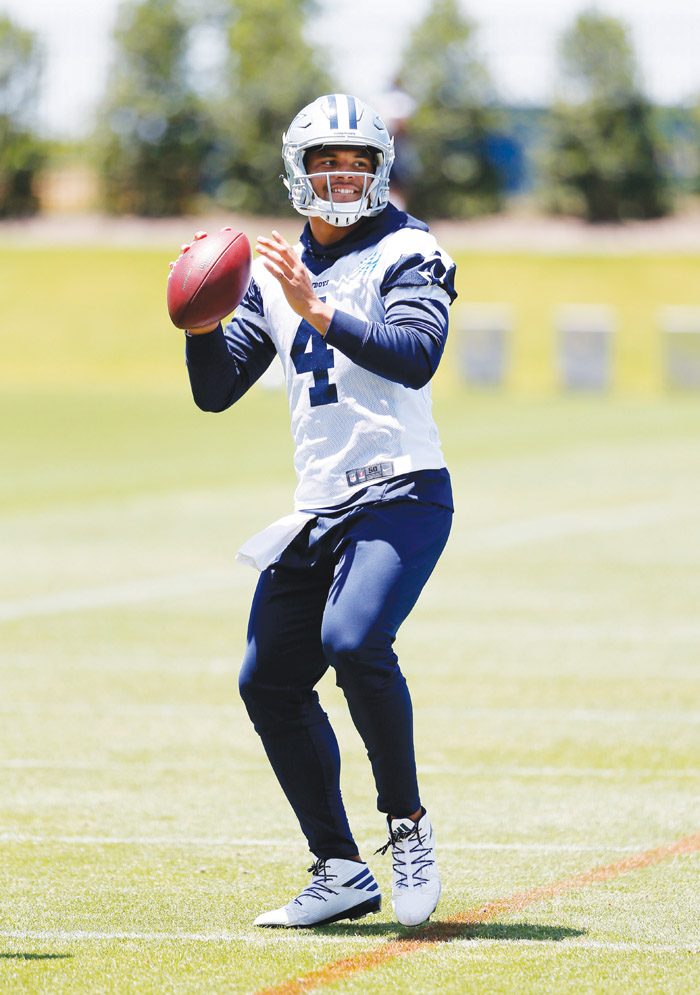 FRISCO, Texas (AP) — Dak Prescott chuckled at the thought of watching film from the offseason this time a year ago, when he said he was in charge for two plays in an entire practice.

Suffice to say the Dallas quarterback is getting more reps now after one of the best rookie seasons in NFL history kept Tony Romo on the bench, and eventually sent the 10-year starter to the broadcast booth. It’s Prescott’s team now, and there aren’t any more questions about Romo.

“Literally, he was splitting reps with the third group last year at this time,” offensive coordinator Scott Linehan said Wednesday after the second offseason practice. “Now he’s taking all the reps with the 1s. That’s a big difference, right?”

One thing is the same: Kellen Moore is the backup. Moore’s injury early in training camp last year started the chain of events that led to Prescott guiding the Cowboys to a franchise-record 11-game winning streak and the NFC’s top seed before a divisional playoff loss to Green Bay.

The most significant event was Romo’s back injury in a preseason game, which thrust Prescott into the starting role. He’s not one to dwell on how he can improve on such a startling debut. Prescott is already wired to think that way.

“I don’t look back on the good,” said Prescott , who was NFL Offensive Rookie of the Year as he set several rookie records, topped by a passer rating of 104.9. “The loss motivates you. The loss pushes you forward more than anything.”

The Cowboys measure their players with NFL combine-type drills each offseason, and quarterbacks coach Wade Wilson said Prescott improved in several areas, including strength and speed.

Prescott’s intangibles caught the team’s attention long before Romo’s injury, and were part of the reason the Cowboys were willing to let him start until Romo was ready to return. When Romo was ready, the Cowboys didn’t seem to think there was much of a decision to make.

“As the year went on last year, he definitely grasped more of the mantle of leadership,” coach Jason Garrett said. “People gravitate toward him. That is one of things that everybody at Mississippi State told us about him right from the start. And we have certainly seen that here.”

While Romo, the lead NFL analyst for CBS, prepared for a weekend appearance with his new employer at the PGA Tour event in Fort Worth, Prescott ran a huddle that was missing fellow rookie sensation Ezekiel Elliott.

The defending NFL rushing champion was a passenger in a minor car accident Sunday night and is sitting out the first week of offseason practices with mild soreness. Elliott bumped his head, but running backs coach Gary Brown said Elliott doesn’t have a concussion.

A year ago, the Cowboys were cautious with Elliott in the offseason because they figured he would be their lead back. They also thought Prescott would be learning as the No. 3 quarterback.

“The No. 1 way to get better is number of reps,” Prescott said. “And just me having a good bit of those this offseason is just going to allow me to get better in my footwork. Get better in the reads, get better going through things faster and being more accurate.”

“I really don’t say, ‘Hey, you’ve got to do this way different,’” Linehan said. “You’ve got to be the same player and get better on a daily basis that you were when we left the field last January. We’re knocking on the door. We’ve got to continue to move and get better.”

Prescott will certainly have the reps.