‘His chance’: Spencer man with MS hopes treatment in India will lead to better future 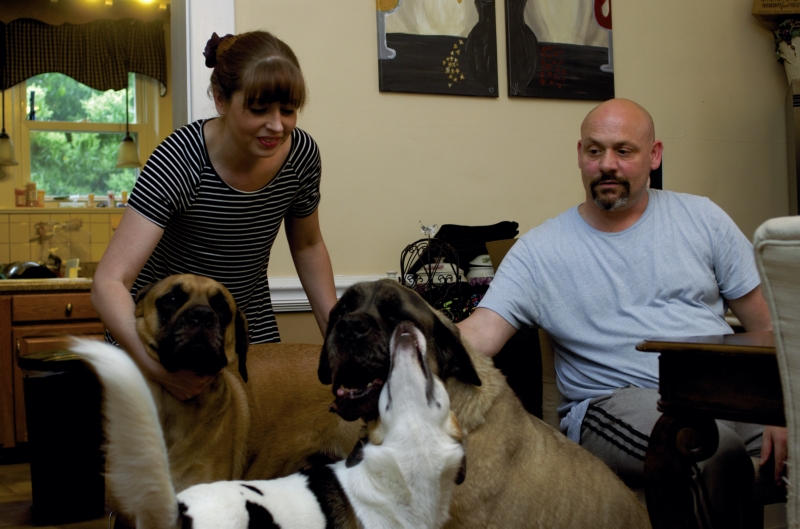 His multiple sclerosis, first diagnosed in 1998, has steadily gotten worse. He’s still ambulatory most of the time, but devices such as a wheelchair, motorized scooter, walker and canes are close by when he needs them.

His speech slurs on occasion, and he grasps for words he knows but just can’t seem to retrieve. Sometimes he can have a long conversation and not remember half of it minutes after it’s over.

Last year, fearful about the quality of life ahead for him, Karczewski started researching different treatments for MS, and he is now counting on a stem cell replacement therapy that goes by the initials HSCT.

The bottom line: By July 12, Karczewski plans to arrive in New Delhi, India, check into Artemis Hospital and begin what could be a 35-day process in which he basically will try to grow a new immune system that has no memory of his MS.

Multiple sclerosis is an auto-immune disease that attacks the central nervous system.

Going to India is a simple decision for Karczeweski, a disabled veteran.

“He sees it as his chance,” Jennifer says.

The trip to India and the treatment he will receive present enormous financial challenges for the couple. The basic cost for the stem cell replacement therapy is $30,000. An additional $5,000 is needed for airfare and nurses.

But it’s $20,000 cheaper — and Karczewski thinks medically safer — than what it would cost in Mexico. Likewise, the procedure at Northwestern University in Chicago would cost $200,000, the couple say, but David doesn’t qualify anyway because he is still mostly ambulatory.

The HSCT treatment also is approved by the Food and Drug Administration only for a few cancer treatments in the United States.

The couple have no insurance, other than Karczewski’s veterans benefits and Medicare. But not a penny will pay for a therapy that is still not FDA-approved for his MS.

Because of the costs, David will make the flights to and from India on his own. The couple have set up Go Fund Me and You Caring pages to accept contributions toward the costs ahead.

David hasn’t been able to work since 2004. Jennifer, who holds both a bachelor’s and master’s degree in business administration, works part time as a waitress at Hendrix Barbecue in Spencer and otherwise takes care of David, their daughters, three dogs and three cats.

The job at Hendrix allows Jennifer to be home within about a minute, if David needs assistance. She has had to call for an ambulance three times to their Spencer home since last October when David’s blood pressure bottomed out or he had an allergic reaction.

When the couple moved here from Wisconsin in 2013, Jennifer was general manager for the Ulta store at Wallace Commons in Salisbury.

Then for two years, she owned Ruby’s Boutique on South Main Street in Salisbury. It was a store for plus-sized women and included a hammock in the back for David when his fatigue from the MS was too much.

The couple closed the store last December, but Jennifer has continued as promotions committee chairwoman for Downtown Salisbury Inc.

Until now, David has been receiving once-a-month infusions of his MS medications at the Hefner VA Medical Center in Salisbury, which has an MS clinic with a dedicated neurologist, nurses, occupational therapist and social worker.

“We have some phenomenal nurses,” Jennifer says.

David says his VA neurologist has been supportive of his trying the treatment in India, as long as he can stand the chemotherapy that goes with it. Meanwhile, David has been going through a washing out — or weaning off — of the MS medications aimed at suppressing his immune system.

At the hospital in India, doctors will first try to boost his immune system, harvest his stem cells, then put Karczewski on a chemotherapy regimen aimed at killing off 90 percent of his immune system.

When daily blood samples indicate he is ready, the doctors will reintroduce his cleaned and filtered stem cells through infusion.

“The idea is that stem cells can become any cell, and with no immune system, they will grow a new immune system with no memory of MS,” Jennifer says.

A lot of preparations and email communications have taken place between David and Artemis Hospital. He filled out a long application and submitted all his medical history with full body scans and blood work.

India is 10 hours ahead of the United States on the clock. “I’m up a lot of nights,” David says.

In his personal research, Karczewski saw that stem cell replacement therapy was being used for other diseases, such as Parkinson’s and Krohn’s, leading him to discover it had been used, often successfully, on MS patients for decades.

“I’ve always been looking for a way out of this disease,” David says.

Karczewski says there is an 80 percent success rate in stopping the progression of the disease and that 70 percent of patients find their symptoms less severe and quality of life improved.

The irony, Jennifer says, is with this treatment you essentially have to kill the immune system first to make it work better later.

“If I can cheat death, why not?” David says.

The couple are natives of Wisconsin, and David entered the Army after graduating from high school in Green Bay. In infantry training at Fort Benning, Georgia, he seriously injured his back, landed in the hospital and was medically discharged from the Army after 10 months.

Returning to Wisconsin, Karczewski learned how to cook under the tutelage of an experienced chef. He worked at three restaurants, but the back problems persisted.

The VA paid for him to attend school and receive training in process control engineering. He learned things such as the speed of factory conveyor belts, load control, temperature control and how to modify packing equipment.

He had back surgery in 1996, and it also was about then the symptoms of MS, which had presented themselves as early as his teenage years in the Army, became more obvious.

His handwriting looked as though it was the penmanship of a 3-year-old. He was dizzy. At a factory, Karczewski says, he almost fell into a vat of molten aluminum. He speech was slurred, and he was having cognitive problems.

The official MS diagnosis came in 1998. Karczewski continued working for three more years. In 2004, the year he married Jennifer, he was classified as having an unemployable disability.

The couple first fell in love with North Carolina when they started vacationing here in 2006. By 2013, after Jennifer had earned her master’s degree, they decided North Carolina would be better for David’s health.

While the 19-hour trip to India and the hospitalization to follow will be a hard, lonely ordeal, the Karczewskis have hope that at least the treatment might slow the progression of David’s disease and, at best, improve his quality of life.

“We hope for him to never get worse,” Jennifer says. “That’s a win in my book and, I think, his as well.”