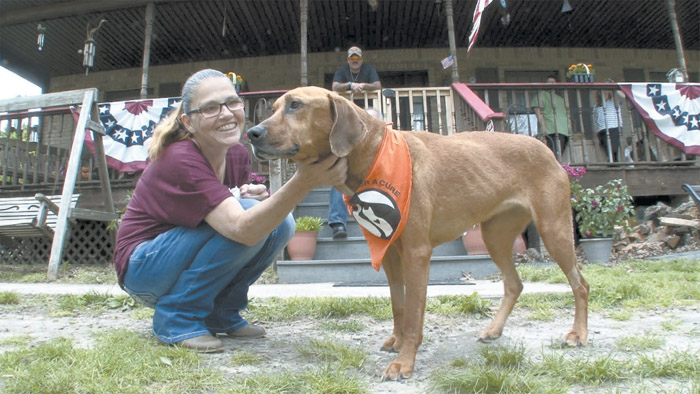 This photo taken May 16, 2017, shows Cali getting some affection from Anita Stout at the Broken Promises Animal Sanctuary in Howell Township, N.J. The dog went missing from a NY family two years ago and showed up emaciated and bleeding two months ago in South Jersey. The sanctuary has been nursing her back to health and found her family, now living in North Carolina. (Thomas P. Costello /The Asbury Park Press via AP)

HOWELL, N.J. — A dog found near death will be reunited with her owners two years after she disappeared.

Five-year-old Cali was found at a rest stop in south New Jersey in April, the Asbury Park Press reported. The emaciated Rhodesian ridgeback was taken to Broken Promises Sanctuary, where volunteers set out to bring her back to life.

“She was all but dead,” said sanctuary President Stuart Goldman.

A mobile veterinarian stabilized the dog with a series of treatments. The sanctuary was able to get in contact with Cali’s owner, Brittney DiBartolo, after finding the dog’s microchip.

DiBartolo and her family searched everywhere for their pet when she disappeared from their Long Island home in 2015. The family moved to Raleigh in 2016.

“It was kind of hard to leave New York and not have Cali with us,” DiBartolo said. “I assumed someone picked her up and kept her because she was such a good dog.”

Cali’s miracle story seemed perfect until doctors found she had cancer that had spread through her nose and behind her eyes. Broken Promises rose to the occasion again when it found a center in Pennsylvania that treated the sick dog with radiation delivered by robotics.

The sanctuary started a GoFundMe campaign to foot the $18,000 vet bill.

Cali’s tumors shrunk, and she returned to a healthy weight. Treatment bought the dog another year and a half of life.

“This was worth every penny,” Goldman said.

The hardy canine is scheduled to be reunited with her family in June as long as her health permits.