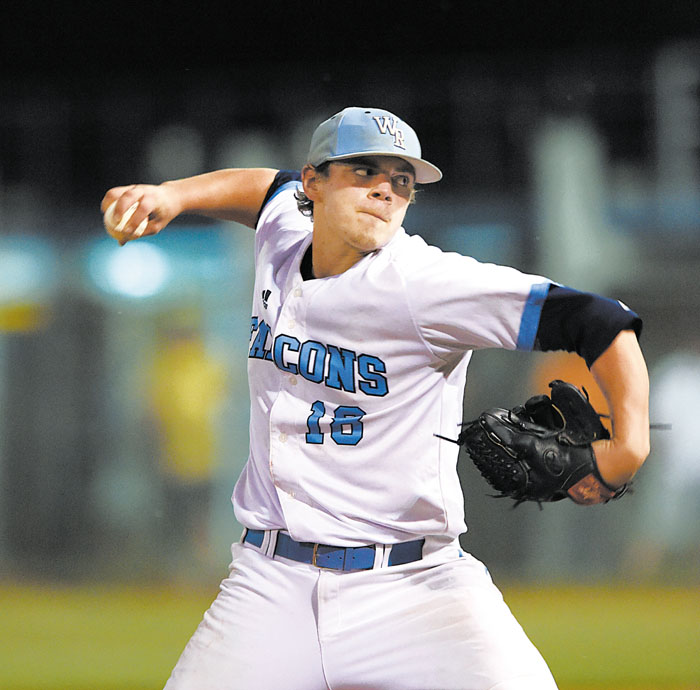 West Rowan's Pearce Wilhelm recently announced that he will continue his education and baseball career at Catawba College. photo by Wayne Hinshaw, for the Salisbury Post

From there, shaky at-bats snowballed on Wilhelm, a senior who had transferred from Carson. Eight games into the 2017 campaign, he was an ugly 2-for-25. His confidence was ebbing and the pressure to do something positive was mounting.

Wilhelm is a big, strong guy (6-2, 215) with all kinds of ability — one of the hits in his 2-for-25 start was a double he smoked against Carson star Owen White — but he was struggling to make contact in a pitching-heavy league. And as the two-time defending champions in the South Piedmont Conference, the Falcons were facing everyone’s best arm and taking everyone’s best shot.

“I was 2-for-25 with a bunch of strikeouts, but when I went out to the field for the next game (March 24, at home, against Cox Mill), I was still in the lineup,” Wilhelm said. “As a player, that gives you a lot of confidence. Coach (Seth) Graham showed a lot of faith in my ability and my potential.”

Essentially the season started for Wilhelm that night against Cox Mill. He went 3-for-4 and drove in three runs to spark a 10-1 victory.

Graham had other lineup options, but by sticking with Wilhelm through those early, swing-and-miss weeks, he transformed West’s season (the Falcons would take their third straight league title) and he changed Wilhelm’s career. Only time will tell, but Graham’s faith in a slumping hitter may change Wilhelm’s life.

“I remember a game when we had two men on base and Coach had a .300 hitter bunt the runners over for me to drive in,” Wilhelm said. “I can’t tell you how great that felt.”

In West’s last 19 games, Wilhelm batted .370. He had six hits and three RBIs in the Falcons’ three playoff wins. He was able to boost his batting average from .080 to .278 by the end of the season, and he also was tough on the mound when called on. The mound probably is where his future lies. While his record was 1-2, he struck out 20 batters in 15 2/3 innings and had an ERA of 1.34. His fastball hisses. His arm is electric.

Wilhelm’s background is primarily as a catcher, but West had Trevor Atwood, one of the county’s top players behind the plate, so Wilhelm saw a lot of time at first base.

“I’d never really taken a ground ball at first base until this year.” Wilhelm said.

He did fine. He was charged with only two errors all season.

“He was good with the glove at first base, but his main tool is always going to be his arm,” Graham said. “He can throw with great velocity, and if he stays healthy, he could be a 90-mph guy at Catawba. There’s a ton of raw ability there with Pearce and he has a good feel for the game. All he needs is experience.”

Wilhelm was on the Carson varsity as a junior and played in a handful of varsity games as a sophomore, but he’s accumulated only 32 career at-bats prior to this season. Carson always had plenty of pitchers, and Ryan Bearden, who was a senior when Wilhelm was a junior, was second team all-county last season.

“I was a senior this year, but as far as my game experience, I felt more like a freshman,” Wilhelm said. “I know I’ve still got a lot of little things to learn.”

Wilhelm nearly made the Rowan County American Legion final cut last summer, and fans may remember him banging a double off the left-field wall at Newman Park during his swan song with the team. Coach Jim Gantt hated to not keep him when the final 18-man roster had to be turned in, but Rowan County had a deep staff and several experienced catchers.

“(Pitching coach) Sandy Moore taught me a lot last summer with the Legion team, and Coach Gantt was encouraging,” Wilhelm said. “He told me he believed I could play college baseball. He talked to me about some schools he thought I should take a look at.”

After seeing Wilhelm pitch and catch in fall ball, Gantt, who is also Catawba’s coach, added Catawba to the list of schools that might be right for Wilhelm.

Wilhelm was excited about getting a college offer close to home.

Now Wilhelm is back with the Rowan County American Legion team. Don’t be surprised if he makes an impact this summer. He’s no longer just a guy with potential. Now he has the confidence to excel.

“Pearce has been hot and he’s been cold,” Graham said. “But once he puts it all together, you’re going to see him blossom into something special.”