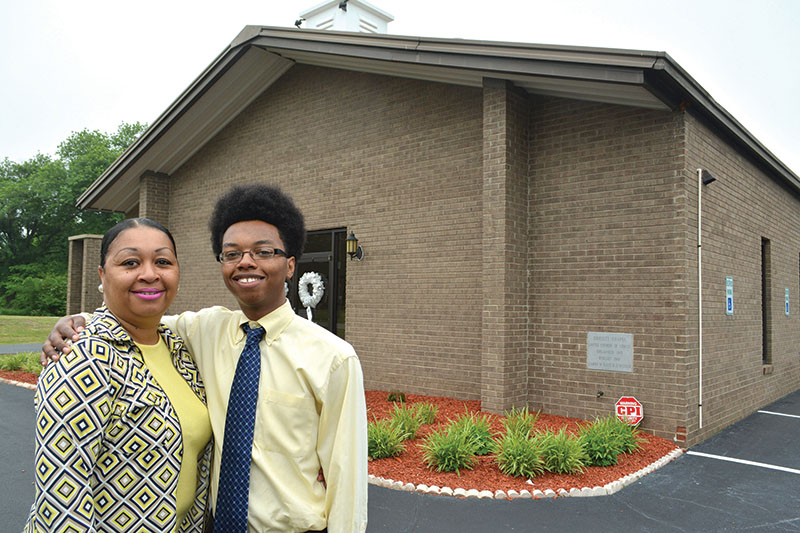 Joshua Ruggs and his mom, Karen Brown, in front of Dorsett Chapel UCC, where she is assistant minister. Joshua credits his mom for keeping him focused on his education and his faith — the two most important things in his life. Susan Shinn Turner/For the Salisbury Post

Joshua Ruggs has a laser-like focus on his education. He recently heard from a neighbor about a pre-college summer program at Harvard University, but when he checked it out online, the financial aid deadline had passed.

Undaunted, Joshua, 16, a junior at Salisbury High School, started a GoFundMe account to raise the necessary $4,500. He’s halfway to reaching his goal before the May 30 deadline.

“I was a little bit shocked,” Joshua admits, “but we’re gonna be able to get the money.”

“We know with God, all things are possible,” added his mom, Karen Brown. “We know if we put it out there, people would be willing to help.”

The two-week program is July 9-21 and offers participants a glimpse of what college life is all about.

Joshua has a 4.0 at Salisbury High, where he’s a member of the National Honor Society and the National Technical Honor Society. He has a perfect attendance record. He is vice president of the COMPASS community program (Confident Optimistic Motivated Persistent Assertiveness Studious Successful) and was recently named its Man of the Year. He’s involved in his church, Dorsett Chapel United Church of Christ — where his mother serves as assistant minister — and volunteers with Rowan Helping Ministries, Habitat for Humanity and the V.A. Medical Center.

Joshua is a soft-spoken young man, but he knows what he wants — and he’s driven to reach his goals.

He writes on his GoFundMe page that he wants “to inspire others who come from single-parent homes to follow their dreams, despite their personal circumstances. Where I’m from, I’m already labeled as a statistic; however, I believe in the power of education and defying the odds. Even though my environment is filled with gang violence and negativity, I see myself as the rose that grew through the concrete. Some would say I’m not supposed to have this once-in-a-lifetime opportunity. However, I worked hard for this opportunity, and I refuse to be the stereotype of the modern-day teenage African-American male.”

“My mom has raised me to push myself to make good grades,” Joshua says. “I just want to have a successful future.”

Brown has raised three sons as a single parent. “An education is something no one can take away from them. It’s my No. 1 priority.”

“The choices I made changed the opportunities I had,” she says.

She’s proud of her two older sons, Marcus, 31, who works for Circle K, and Devin, 28, who works for Target in Greensboro. Both are pursuing master’s degrees.

“My sons know Mom don’t play when it comes to school,” Brown says. “That will get them into doors. I want them working hard and being focused. I want them not to be a statistic, but to do well.”

Brown takes comfort in knowing that Joshua has the same focus as his older brothers when it comes to education. She offered to let him transfer from Salisbury High School because of gang activity near campus, but he refused. He told her, “I’m not gonna let that stop me from doing what I need to do.”

After all, Brown says, “Life is not always going to be peaceful, quiet and sweet. You have to learn how to rise above all of that.”

Joshua says he simply stays away from students who may be bad influences. Instead, he’s friends with his fellow honors students.

“He’s a wonderful young man, the kind a teacher dreams of having,” she says. “He’s inquisitive, and he always wants to know more. He often stayed after class to talk. It’s hard for African-American males at our school to be academic and be OK with it, but he doesn’t care what others think. He visits my room almost daily. He’s one of those students you just love.”

She adds, “He’s so excited about this program. I really hope he has that experience. It’s a great step for him.”

“I have known Karen since we moved to Salisbury,” she says of her former co-worker. “She always had an impeccable work ethic and the most energetic smile. Joshua has gotten both of these traits from her. He has taken the initiative to ensure his success and is taking responsibility for it. He is fighting not to be a statistic. We were so proud to see him honored at the COMPASS award ceremony. We as a community rarely get the chance to directly support our youth in such an easy way — much less get one of our own exposure to Harvard.”

Joshua says there are weeks that he doesn’t watch TV at all because he’s doing homework or studying. On weekends, when he’s not involved in other activities, he does take the time for video games. “Uncharted,” an adventure game, is a favorite.

Joshua describes himself as hardworking, focused and funny, and again credits his mom for keeping him on track. It’s rare when he is not, he admits.

Brown is also pleased that Joshua is involved at church.

“I get to learn more about God, and learn how to be a better man,” he says.

The congregation is supportive of all of his activities, and especially this current goal, he adds.

Asked about his favorite Bible verse, Joshua points to Psalm 121. “It fits this situation exactly. We look to God for our help. He has helped us, and we’re gonna get this money.”