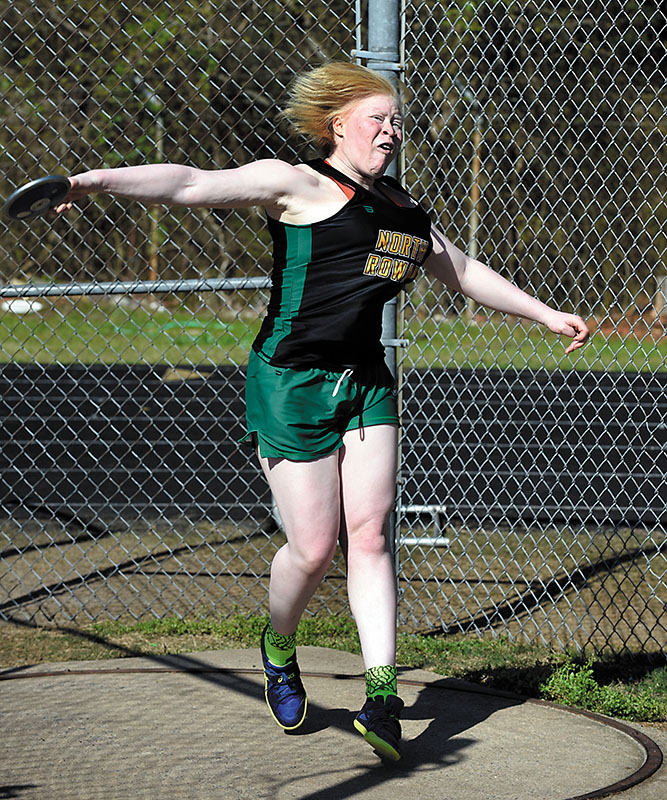 She’ll be joining them as a college student-athlete in the fall, but not for hoops. She’ll provide a boost for Pfeiffer University’s track and field program as a thrower and also hopes to play volleyball for the Falcons. Blaire, who is 5-foot-9, is undersized for a middle blocker, the position she played at North, but she did pace the team in blocks as a senior.

“My sisters hit a lot of volleyballs at me growing up,” Blaire said with a laugh. “It was good practice.”

Blaire, an outstanding student, is excited about Pfeiffer for a lot of reasons, most of them academic.

“The plan is to get a masters degree in business,” Blaire said. “And Pfeiffer is not far from home. I wanted to go to a small school and I didn’t want to go too far away.”

Blaire has made an an impact in Rowan County and Central Carolina Conference track and field since her sophomore year. She’s competed in the last three 2A State Championships.

“She works hard at it, always has a positive attitude and understands the value of nutrition and weightlifting,” North track coach Wendell Rhodes said. “She’s been great for this community off the field as a mentor to a lot of youngsters, and she’s been one of the rocks for the track program. She’s gotten better every year.”

Blaire won CCC championships in the discus and shot put her junior and senior seasons.

In the Rowan County Championships, she’s taken three straight shot put titles. With a throw of 34 feet, 7 inches, she won the county meet by nearly 8 feet this year. Blaire also won her first discus title in the county meet as a senior after finishing runner-up last  year and sixth as a sophomore. Blaire had a throw of 115 feet, 1 inch and out-distanced the county competition by almost 18 feet.

Blaire’s personal bests are 120 feet, 3 inches in the discus and 38-7 in the shot put. She’s had a lot of fun putting up those numbers.

“There’s never a dull moment with Chevy because of that vibrant personality she has,”North throws coach Shirley Barber said. “But she practices hard and her work ethic in practice is reflected in her success in meets. She’s worked to become stronger and more explosive, and she’s had great accomplishments.”

The track season always starts in frigid cold and finishes in sweltering heat, but Blaire was a constant for North in every kind of weather. The Cavaliers could always count on her for major points in the throws.

“I just tried to stay humble, not cocky, no matter what I did,” Blaire said.

Pfeiffer started a track program from scratch prior to the 2014-15 season. It has grown steadily.

The Falcons are dropping down from Division II to D-III competition next season. Blaire has a chance to be a standout at that level.

“I’m looking forward to school and I’m excited about competing,” she said. “Pfeiffer is bringing in the biggest track recruiting class they’ve ever had.”