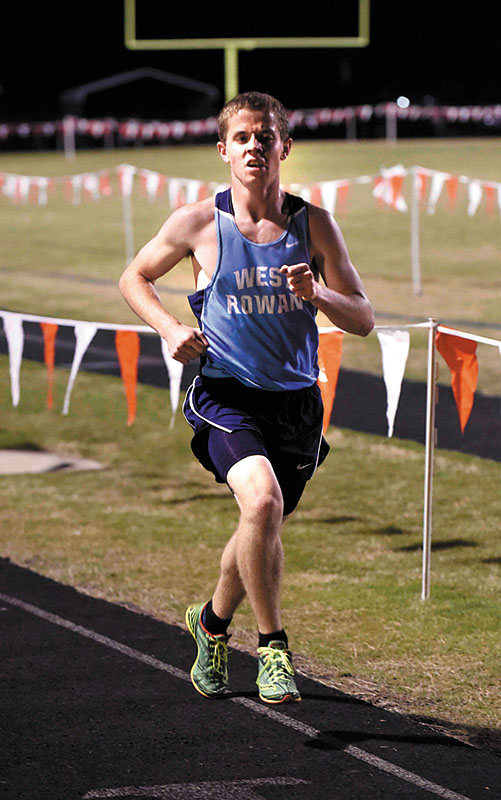 MOUNT ULLA — Even the West Rowan High students who don’t know Nathan Zauner’s name recognize him when he walks down the halls.

“I’m that kid that’s always running around the school, so they see me out there a lot,” Zauner said with a smile. “I know every crevice on the school grounds here.”

Zauner is a textbook case of relentless work leading to a college opportunity. He’ll get to keep running at Methodist University in Fayetteville, where he plans to compete for the cross country and track and field teams. In track, he’ll probably run the 1500 and 3000 meters. He can run a 4:50 mile, but he’s definitely a distance guy.

The longer the race, the better. Given Zauner’s exceptional level of fitness, he’s going to be stronger in college 8K races than he was in high school 5K meets.

“He’s the hardest-working kid I’ve ever coached,” West track and cross country coach Scott Foster said. “He runs 60 miles a week. He’s put in more miles than anyone I’ve ever seen. He runs two or three miles on the treadmill every morning before he comes to school. Then he runs some more.”

Zauner runs often at Salisbury Community Park, which is not far from his house.

In other words, if he he could run on water, Zauner would be in Japan by now.

His father’s job transfer brought Zauner to Rowan County from Michigan eight years ago. Zauner loved football and, for a while, he thought that was the sport in which he would excel.

“I was getting a lot of playing time at West Rowan Middle School, but not as much after I got to high school,” Zauner said. “Football was still fun and I was still bringing it, but I wanted to see what I could do as a runner.”

Zauner came to the running sports late. Then he suffered a broken foot when he stepped on the barrier that separates the inside lane on the West track from the infield. That setback wrecked his junior year.

“Because of the injury, he basically just had one year of cross country,” Foster said. “I’ll always wonder just how fast could he have been if he’d run for four years. He was our team MVP in cross country in the fall because he was so consistent and placed high in every meet.”

In cross country, Zauner came out of nowhere as a senior to place fourth in the Rowan County Championships and fifth in the South Piedmont Conference Championships. Zauner was West’s fastest runner in the 3A Midwest Regional.

Zauner has accomplished goals of being all-county and all-conference in both sports.

Zauner’s grades and work ethic attracted interest from Division II and Division III colleges, including Catawba, Lees-McRae and Emory & Henry, but he was most impressed by Methodist assistant track and head cross country coach Jack Brunecz, who has run a 15:41 5K.

While D-III Methodist can’t offer athletic scholarships, Zauner is receiving academic and ROTC scholarships. His future goal is industrial engineer and he’ll be participating in the Army ROTC program at Fayetteville State, about eight minutes away from Methodist.

West graduation is set for June 10. But for another few weeks, Zauner will be that kid who runs around the school.