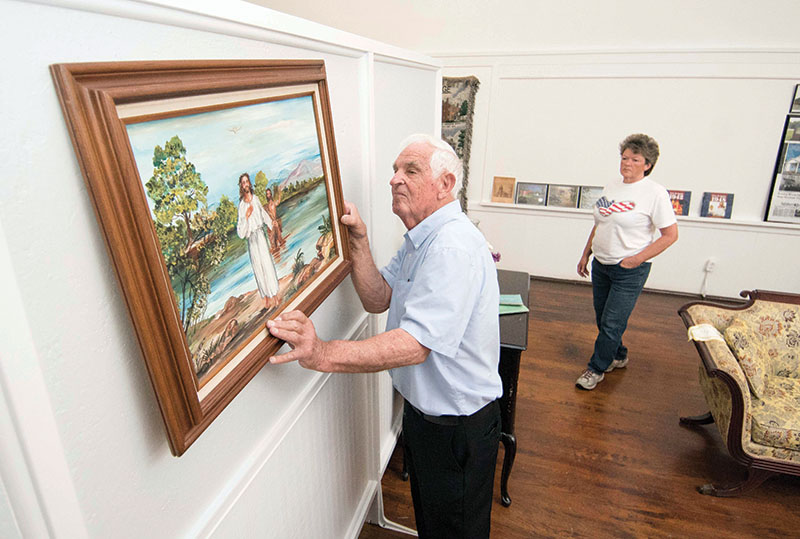 JON C. LAKEY / SALISBURY POST Bobby Mault tries to rehang a painting on the wall of the living room. Mault’s dream of having a three-room home set up in one of the large classrooms at Price of Freedom museum has come to fruition. The rural ‘home’ is set up as a home would have been back in the 1940s.

The hulking 1936 kitchen stove looks as though it would take four men to move.

In the living room, the cabinet radio in the corner begs you to sit down, as if you could hear a Sunday fireside chat of President Franklin D. Roosevelt.

You can picture your mom sitting on the sofa, patiently tatting out lace doilies to sit under a vase or to protect the arms of a chair.

The organ on the other side of the room is ready for an aunt or uncle to sit down and play. Framed photographs on the organ and fireplace mantel show the young men who are off at war.

There’s a patterned dress spread out on the ironing board in the bedroom.

The Price of Freedom Museum’s newest exhibit features a three-room house — kitchen, living room and bedroom — depicting how a typical home might have looked around World War II.

Bobby Mault, the cofounder and visionary behind the Price of Freedom Museum, has long imagined this three-room house, which will be open to the public for the first time at the museum’s annual D-Day Remembrance June 3 and 4.

“It’s going to be an attraction for this museum,” Mault says.

The idea probably took root when Mault was a youngster and his three oldest brothers, Jim, Ray and Claude, were all serving in World War II. The Mault family back in China Grove — in a setting quite similar to what you’ll see at the museum — would go weeks and months without hearing from any of the boys.

When the telephone rang, Bobby’s parents, Robert and Irene Mault, would be afraid to answer it, fearing it could be bad news. Young Bobby spent many of his days from an 8- to 12-year-old waiting on the China Grove mailman, hoping he brought word from the brothers overseas.

This scene played out in home after home across the country, and Bobby Mault always wanted his Price of Freedom Museum to include something that would help tell the story of people back on the home front.

He hopes the look of the three-room house does that, especially for the people who lived it.

Most people who come in now say, ” ‘I could be in here for two or three days,” Mault says.

Since she started volunteering at the museum, Millsaps has learned Mault always prays for the Lord to guide him in each new room or exhibit he tackles.

The three-room house is simply “a prayer answered,” she says.

Millsaps and her sister, Claire Hiatt, did most of the painting and decorating, while Mault and dedicated lieutenants such as Bobby Harrison and Joel Honeycutt provided input, elbow grease and access to the artifacts Millsaps needed.

As with everything else in the museum, Mault points out, nothing was asked for and no money was spent in creating the three-room house. People donated everything.

The “house” was created out of what used to be the big kitchen at Patterson School. Mault first leased this 1936 school building off Patterson Road from Rowan-Salisbury Schools in 2004 and started developing the Price of Freedom Museum in 2006.

It began with the display of friends’ old military uniforms in Mault’s service station, and he moved those uniforms and other military artifacts people gave him to the school’s former cafeteria annex.

Close to 1,000 uniforms are now part of the museum’s exhibits. But that only scratches the surface of the military stuff a visitor can see.

Each branch of the military has a classroom dedicated to it. Artifacts now reach as far back as the Civil War and World War I, but the majority of military items relate to World War II up to modern day.

Some space, including the original school cafeteria, is devoted to firefighters and law enforcement.

Through this school year, 11,550 fifth-graders in Rowan-Salisbury Schools have made a two-hour field trip to the museum. Now that the three-room house is ready to go, Mault’s next project will focus on the school auditorium.

He envisions it as a place for community gatherings and — more likely — concerts by local musicians. In between acts, he sees the museum’s pulling down a screen and showing news-reel-type interviews with local veterans.

Scores of these interviews already have been videotaped.

The museum has many events through the year, such as D-Day Remembrance, 9/11 Remembrance and Veterans Day celebrations. The museum, which is free, also is open from 3-5 p.m. Sundays and by appointment.

The kitchen, living room and bedroom of the three-room house hold many treasures. A small white cabinet in the kitchen, Millsaps points out, is an exact replica of one often seen in Aunt Bea’s kitchen on the old “Andy Griffith Show.”

Mault says a radio on the bedroom nightstand is similar to the one the Walton family listened to in that old television series.

Millsaps says she spent hours one night flipping through samples of a fabric company in California, looking for the right kind of nostalgic pattern to use for kitchen curtains and to hide the space under the sink.

She finally chose an apples-and-pears pattern common for those times. Millsaps is still looking for an appropriate photograph she can slip into the fake kitchen window to provide a scene.

The glass-paned cabinets in the kitchen hold things such as milk bottles from old Rowan County dairies. The coffee grinder on the counter relies on  a big hand crank. The refrigerator next to the sink is an early-model Frigidaire.

Mault explains how much churches meant to families in wartime.

“Church and family during World War II were like that,” Mault says, interlocking his hands.

A wall opposite and running much of the length of the three-room house will be called the church wall. Mault envisions having five different photos from each of the local churches which will be on the wall.

The photographs will be placed in chronological order, showing how the churches have changed in appearance since their founding.

The wooden floors throughout the school are original. The living room in the three-room house bears a Russian rug, which a serviceman had bought in England. The decorative fireplace mantel — from the home of Ruby Mault’s grandmother — had to be cleaned thoroughly.

Millsaps said the cleaning revealed a beautiful mantle of at least three different types of wood.

In the bedroom, the quilt serving as a bedspread has the names of women who patched it together written on individual squares.

Mault stresses the exhibit will not be static.

“We’re going to keep moving stuff around,” Mault says. “It will change. It won’t be the same-old, same-old.”

The living room would not be complete without photographs. A wedding photo on a corner stand is the mother and father of Bob Price, Mault says.

The four military photographs of soldiers are Mault’s brothers, including Eddie, who was too young for World War II but later served in Korea. Bobby and Eddie ran the service station together for 48 years before Eddie’s passing.

Because of a snafu in the paperwork after he was drafted, Bobby Mault ended up never serving in the military, and he has always believed he was left behind to do this museum.

By the way, the Mault brothers who served in World War II made it back home, but they had close calls.

Ray survived his destroyer’s being hit by enemy fire in the Mediterranean. Claude escaped injury, even though he was on tanker and ammunitions ships that took enemy hits.

Jim was on a B-24 that crashed once on a South Pacific landing strip because its tires were shot out by a Japanese sniper who had tied himself to a nearby tree. Jim was OK, and one day the post office delivered a box with the Japanese sniper’s rifle inside.

The rifle is on display at the Price of Freedom Museum.

Yesterday: An aerial view of the Catawba College campus…