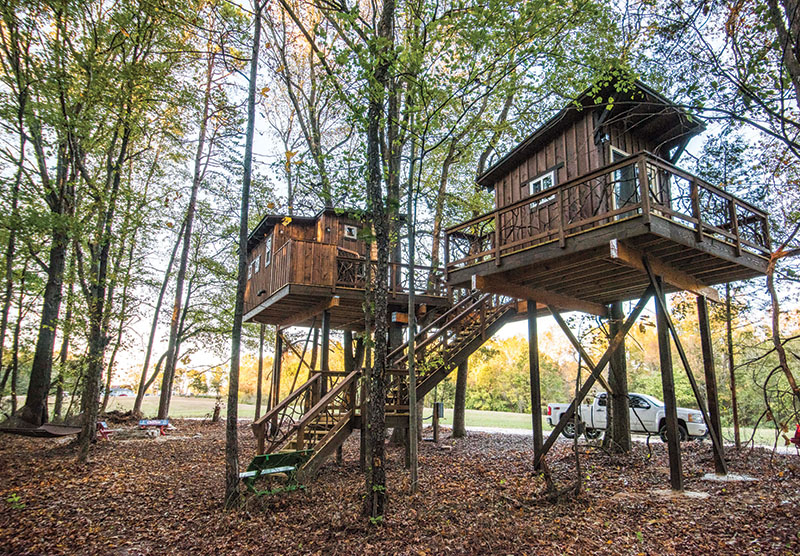 JON C. LAKEY / SALISBURY POST Cherry Treesort located near China Grove has completed a second treehouse not far from the first one. The most recent treehouse has some additions and improvements, such as added sleeping areas and a outdoor shower.

CHINA GROVE — Trent Cherry is at it again.

After opening the Cherry Treesort to the public last summer — featuring a treehouse for grown-ups — Cherry now has a second, larger treehouse for family camping, birthday parties, girls nights out … you name it.

“It has a bigger feel,” Cherry says. “I want it all to be a little different.”

Cherry christened this treehouse “Big Nick,” for his second, with the original treehouse now going by the moniker, “Miss Molly” for his daughter. Cherry and his wife, Ashley, live minutes away in Landis.

Inside the main treehouse room, there are the same amenities of the original unit: microwave, refrigerator, coffee maker and small sink. The bathroom is in the main room, but accessible from the other room from the outdoor shower area, so as not to disturb those who stay in the main room.

Both treehouses have gotten rave reviews from guests, especially with folks from out of town.

“They think the town of China Grove is a town you can see on the Hallmark Channel,” he says of those guests. “And everybody who comes spends money in town.”

“What a beautiful place!” wrote the Grieco family from Buffalo, N.Y. “My family was in awe. Keep dreaming these places up. This world needs more treehouses!”

“I have had the best time with the person who is my favorite of all others in this crazy world,” Matt Short wrote after a visit with Christina Ritter. “Hopefully she feels the same.”

They visited Restaurant 46 in Kannapolis, the Lazy 5 Ranch, Carrigan Farms and Granite Quarry.

“What a wonderful place, and a great place to spend our granddaughter’s 7th birthday,” wrote a family who came from Greensboro and Fredericksburg, Va. “Great idea. We need more places like this to spend quality time with family. It’s a place to relax and unwind, and we will visit again.”

“I really enjoyed with 13th birthday party in the treehouse!” one girl wrote. “We went on adventures in the woods and played on the hay bales. We would love to come back again!”

“What a great experience!” another family wrote. “We range in age from 5 to 65 and were all enchanted. So comfortable, and the fire pit was magic! We’ll be back!”

So will Melissa Shue, who lives with her family in Salisbury. She and husband Mark came with their son, Graham.

“Our family rented ‘Big Nick’ for a birthday party weekend and loved every minute of it,” she says. “It’s clean, neat and comfortable. It’s such a peaceful getaway. Even as locals, we want to go back. It’s an advantage not to have to waste time driving to a wooded environment. Trent is super to work with, which is a bonus. It’s a great place to build memories! We had a wonderful time.”

The treehouses may be rented separately or together. Cherry thinks they’d be great for a mini family reunion. The two treehouses can sleep 12 guests altogether. In between the two treehouses is a large activity area with fire pit, a grill, a giant Jenga set, Adirondack chairs, Cheerwine benches, a large swing and hammocks. Cherry just installed a second activity area beneath the new treehouse, and put in an amphitheater at the rear of the property.

The new treehouse is 14 feet by 12 feet in the main room, with the bunkhouse coming in at 8 feet by 8 feet. So it’s a bit larger footprint than the original treehouse Cherry built during Thanksgiving 2015. For the second treehouse, he used the same crew from California that specializes in building them, Doug Tolson and Johnny Stevens.

Cherry says he’s had a good mix of clients from in town and out of town, and already some repeat customers. Business is so good, in fact, that Cherry is building a third treehouse next month, set to open in mid-July.