A look inside a beautiful, terrible Iran 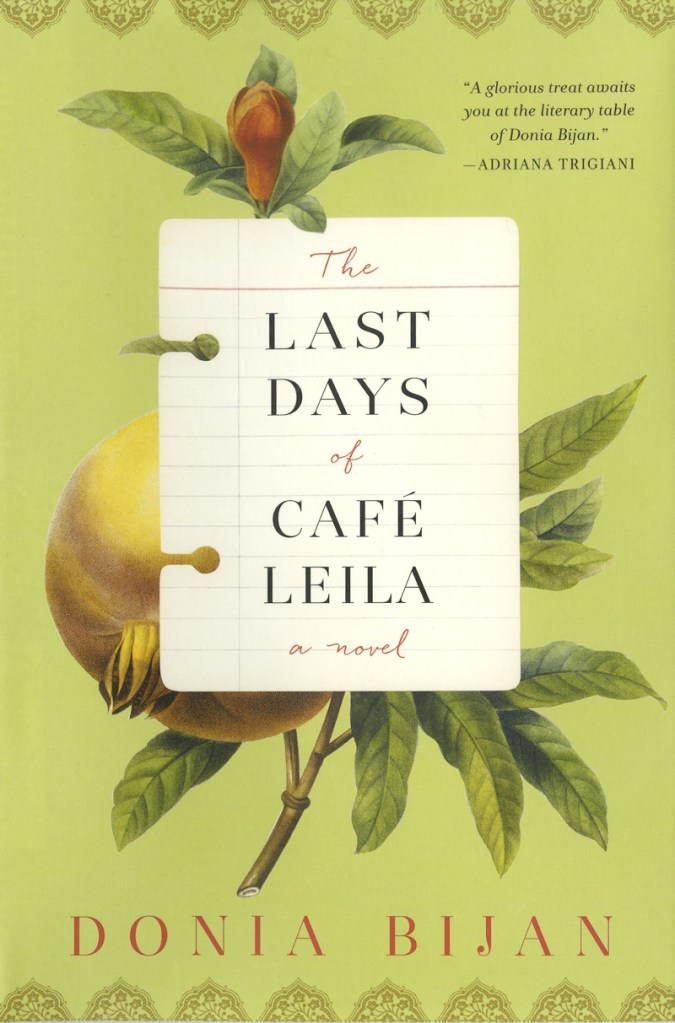 Everything must end, no matter how hard we try to stop it, and so it is at Cafe Leila, an oasis in Tehran, a place where people came not just to eat, but to talk, to share hopes and dreams, disappointments and tragedies.

When Bijan travels with her sisters back to Iran to try to get back the family home, seized post-Revolution, they really had no place to go.

Bijan, like the character Noor in “The Last Days of Cafe Leila,” had left home as a teenager, to return as a middle-aged woman.

So with a deep background like that, and stories of life three decades ago, Bijan has created a novel full of emotion, ripe with memories and marked by myriad questions and uncertainties.

When Noor’s marriage breaks up — Nelson, her cardiologist husband, is having an affair — she takes her difficult teenager, Lily, to visit her own father, Zod, who has been part of the café for generations.

Noor is lost, not knowing how to move forward without her family life, so she moves backward, returning to her childhood home and the father she always adored.

Lily is an angry, rebellious young woman who is close to her father and cannot understand what sort of madness has overtaken her mother, dragging her to this dusty old place full of strange people speaking a language she has never heard.

Noor cannot deal with her daughter, or won’t. Instead, she assumes the role of child again, relying on her aged and ill father to provide her what she needs, which is love, affirmation, comfort.

At the café, there are familiar faces: her father, Zod, Naneh Goli, a woman the family took in decades ago, the faithful employees. This is the family Noor re-enters.

Told by an omnisicent third person narrator, the book is really about Zod, the dying man who has seen so much, too much, as revolution swept the country, killed his wife, stole his customers, quieted his music.

It is through Zod that we learn why Noor and her brother, Mehrdad were sent to America so long ago. After their mother, Pari is kidnapped, tortured and killed by the regime, Zod fears his children will not live to grow up. Like so many of his generation, Zod saw escape as the only hope for the survival.

He sends them to his younger brother, Morad, a bitter, angry and very successful Iranian living in California. Noor and Mehrdad feel nothing from him but an urge to be rid of them, but his nurturing wife, Farah, who never had children, treats them as precious gift.

Noor and her brother finish college. She becomes a nurse, then meets Nelson,  and falls in love. She shows love through food, as her father did before her, but Nelson is hard to resist, for other women, and when he strays, Noor ends the marriage and flees back to the café, with its walled courtyard and graceful trees, to the smell and sights of home.

Bijan describes the cafe best with this line: “The world changed around Café Leila, but the life that had gone on there since the 1930s continued. Where once there were merchants to their left and right, there now stood mostly uninhabited buildings gazing vacantly at one another.”

It is an oasis for many.

Here, miserable Lily hides in her room, afraid of the foreign people and sounds and smells that surround her. Zod tries, gently, carefully, to tame her wild anger and fold her into this world.

The descriptions of the Persian food Zod, Naneh and the rest of the staff prepare are mouthwatering, sounding exotic and luxurious. Love is contained in a special recipe, a unique spice, the sound of boiling or frying.

Yet, the food is not the story. It is one of the enhancements to a tale of lost people finding each other again, to a nation wracked by war, extremism and hate yet full of people just trying to live the life they once knew — one of cooperation, friendship and celebration.

Lily, who has befriended young Karim in a way that would not be acceptable to the  public there, learns how harsh the regime can be in a violent incident that changes her, perhaps forever. It certainly changes Noor. It shifts her focus, but she’s still looking to someone else for happiness.

One is left with the question of whether Noor is right — can she start over with someone who needs her more? Can she keep the café alive? Can something as simple as love survive in Iran?

Bijan leaves that question mark solidly in place, with echoes sounding from the café walls.