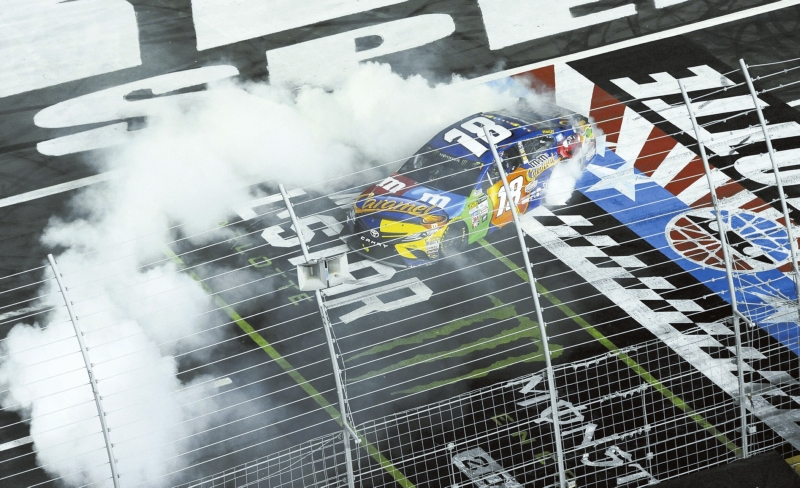 Busch used an aggressive three-wide pass for the lead Saturday night to take the All-Star event for the first time.

“It was now or never,” Busch said.

Although the race does not count in the standings, it was Busch’s first Cup victory of the season and first at Charlotte Motor Speedway. Busch also won the Truck Series race Friday night, but the victory Saturday was the first time he’s ever been to victory lane at Charlotte in a Cup car.

His winning ways in lower divisions often gives fans a sour taste, but Busch was cheered as he excitedly pumped the checkered flag.

“I think they were just glad to see a new winner,” he joked.

Busch dove low around Brad Keselowski and Jimmie Johnson on the restart to take the lead on the final 10-lap sprint. This year’s format pitted 10 drivers against each other for 10 final laps with the money on the line.

“I wouldn’t take anyone else but Kyle Busch on a restart,” said crew chief Adam Stevens.

Clean air was the difference and Busch was untouchable once out front.

“We have never won in Charlotte in a Cup car and we finally did that,” Busch said from victory lane. “We won a million dollars. There is reason to celebrate big. We are relieved, eluded and excited.”

Kyle Larson, winner of the first two 20-lap segments and the clear car to beat, finished second. He was stymied by a slow final pit stop that prevented him from restarting as the leader.

“My pit crew has been awesome all year. We came down pit road the leader and three people passed up. That was pretty much the difference,” Larson said. “With 10 laps, track position is huge and we just didn’t have it at the end. We had the best car out there for sure.”

He was highly disappointed and said finished second “sucks (expletive).”

Johnson won the second segment to advance, but let the win get away on the restart for the finale.

NASCAR, Charlotte track president Marcus Smith and Goodyear officials hoped the introduction of a “bonus tire” would liven the race. The idea was that the softer tire — which was faster — could be used once at any time during the race.

Ryan Blaney and Daniel Suarez, who both raced their way into the event in an earlier qualifier Saturday, along with Chase Elliott, winner of the fan vote, all opened the race with the softer tires. It made little difference as the first segment was more like a 20-lap parade, with little action and Larson leading flag to flag.

The mandatory pit stops after the segment were a disaster for Matt Kenseth, who developed an oil leak and went to the garage.

Martin Truex Jr. was among the five drivers who took the softer tires on the pit stop, but a penalty by his team sent him to the rear of the field for the start of segment two. The softer tires had minimum influence, and no one had anything for Larson anyway. He again led the entire segment, then took his softer tires for the third segment.

Larson wasn’t the leader at the start of the second segment because Clint Bowyer and Blaney took only two tires on the pit stop to jump to the lead. Bowyer’s was a gamble because he had the softer tires on his car already, and the rule required that all four softer tires be put on the car at once.

In making just a two-tire stop, Bowyer found himself with a pair of primary tires and a pair of soft tires. NASCAR had to decide if that was legal, which it was because Bowyer had placed the four soft tires on at the same time.

“I read the entry blanks and everything before I got here, and it’s not in there,” said crew chief Mike Bugarewicz.

The move didn’t work and Bowyer plunged into the field, and he failed to advance into the final round. Blaney couldn’t hold the lead either and Johnson won the stage to earn the automatic berth into the finale.

Meanwhile, Keselowski had planned to use the softer tires in the third segment, but developed a vibration during the caution period. His team took the tires off, intending to use them in the final segment, but NASCAR refused. The tires had to be brand new when put on the car, and NASCAR ruled that even used only under caution, the tires were no longer allowed.

Larson and Johnson locked in the first two spots in the finale as stage winners, and Busch, Kevin Harvick, Kurt Busch, Jamie McMurray, Denny Hamlin, Keselowski, Elliott and Joey Logano rounded out the final 10. They earned the spots based on average finishing position.

Johnson won the race off pit, Keselowski stayed out on old tires, and Kyle Busch pounced on the restart. No driver in the final segment used the softer tires.