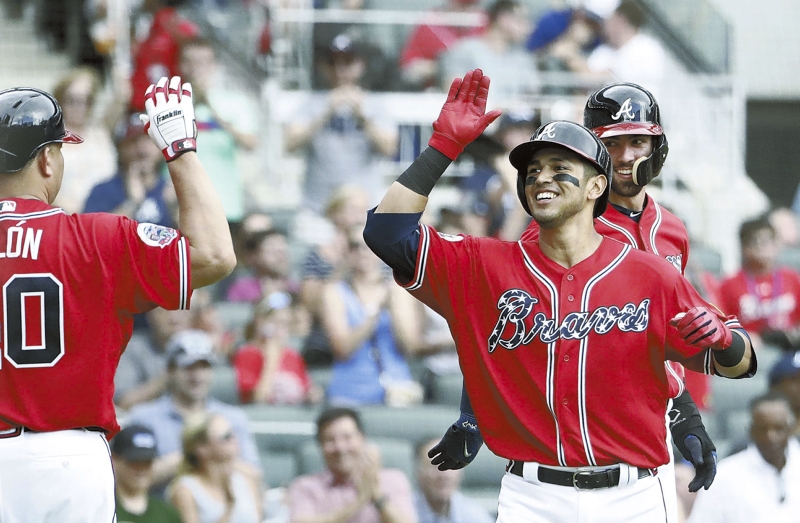 After Bartolo Colon allowed two runs, one earned, in 4 1/3 innings, five relievers combined for 4 2/3 hitless innings. Ian Krol (1-1) recorded the final two outs in the fifth. Jim Johnson pitched the ninth for his eighth save.

Four relievers combined for 3 2/3 perfect innings in Atlanta’s 7-4 win over Washington on Friday night. The Braves have won seven of nine.

Ruiz and Kemp hit homers off Scherzer (4-3). The shot by Ruiz in the second was his first career homer and first hit of the season.

HOUSTON (AP) — Mike Clevinger pitched no-hit ball into the seventh inning, and Andrew Miller and Cody Allen completed the three-hitter to give the Cleveland Indians a 3-0 victory over the Houston Astros on Saturday.

Clevinger (2-1) yielded two hits and struck out a career-high eight in 7-plus innings, the longest outing of his career.

Houston didn’t get its first hit until Jose Altuve’s sharp grounder down the left-field line for a single with no outs in the seventh inning. Clevinger was lifted after Evan Gattis singled with no outs in the eighth. Miller struck out two in the eighth and Allen allowed one hit in the ninth to convert his 12th save in as many opportunities and give him 21 straight dating to Aug. 18.

PITTSBURGH (AP) — Ivan Nova pitched into the eighth inning for his first win in four starts since April 29, leading the Pittsburgh Pirates past the Philadelphia Phillies.

Nova (4-3) allowed three runs and nine hits in 7 1/3 innings. The NL Pitcher of the Month in April struck out three and walked none.

Francisco Cervelli and Adam Frazier hit two-run singles during a four-run sixth inning that extended the Pirates’ lead to 6-1. David Freese’s leadoff home run, his fourth, in the fourth inning broke a 1-1 tie.

OAKLAND, Calif. (AP) — Chad Pinder hit a monster home run, Khris Davis and Mark Canha also connected in the fifth inning, and the Oakland Athletics cleared the fences four times in all to beat the Boston Red Sox for their third straight win.

Hanley Ramirez homered for Boston, which has lost three in a row.

Jed Lowrie had a solo shot in the sixth for Oakland, which leads the AL with 63 home runs. A’s manager Bob Melvin didn’t see any of them in person after being ejected in the second inning.

While no official records are kept, the A’s said Pinder’s deep drive into the plaza reserved section is believed to be just the fourth home run to reach the second-deck seating level since it was built in 1996. San Francisco’s Jarrett Parker had the last one in 2015 and Larry Walker did it for Colorado in 1999. Mark McGwire hit one that far against Cleveland in 1996.

Yankees rookie Aaron Judge hit his 15th home run, most in the majors. He also doubled and has a career-best eight-game hitting streak.

New York manager Joe Girardi used his hands to cover the plate with dirt after being tossed by umpire Scott Barry in the fifth inning. That came right after pitching coach Larry Rothschild was ejected by Barry during a mound visit.

Rays starter Matt Andriese hit Matt Holliday after giving up a home run to Gary Sanchez in the fifth. In the bottom half, Yankees reliever Tommy Layne plunked Dickerson, who had hit two home runs off Masahiro Tanaka. Andriese (4-1) hit Judge with a pitch leading off the sixth and was thrown out. The 6-foot-7 Judge dropped his bat and calmly went to first base after being struck.

CINCINNATI (AP) — Scott Schebler’s homer completed Cincinnati’s comeback from a five-run deficit, and the Reds ended a seven-game losing streak — their longest in a year — with a victory over the Colorado Rockies.

It was Cincinnati’s longest skid since it dropped 11 straight last May.

Colorado rookie Antonio Senzatela was in line for an NL-leading seventh win before the Rockies’ bullpen let the big lead slip away. Senzatela had a bases-loaded single during a six-run fifth inning that put the Rockies ahead 8-3.

Arroyo’s double off the wall in left field scored Buster Posey and Brandon Crawford and came on the 12th pitch he saw from Cardinals reliever Kevin Siegrist (0-1). Posey, Crawford and Eduardo Nunez singled to load the bases, giving the Giants their first runners in scoring position in the game.

Hunter Strickland (1-1), Derek Law and Josh Osich pitched in relief for the Giants, who won for the seventh time in eight games.

Asher Wojciechowski, who was called up before the game to help the Reds’ overworked bullpen, gave up one hit in 3 2/3 innings for his first major league win.