UNC baseball back on top in ACC after short, two-year hiccup 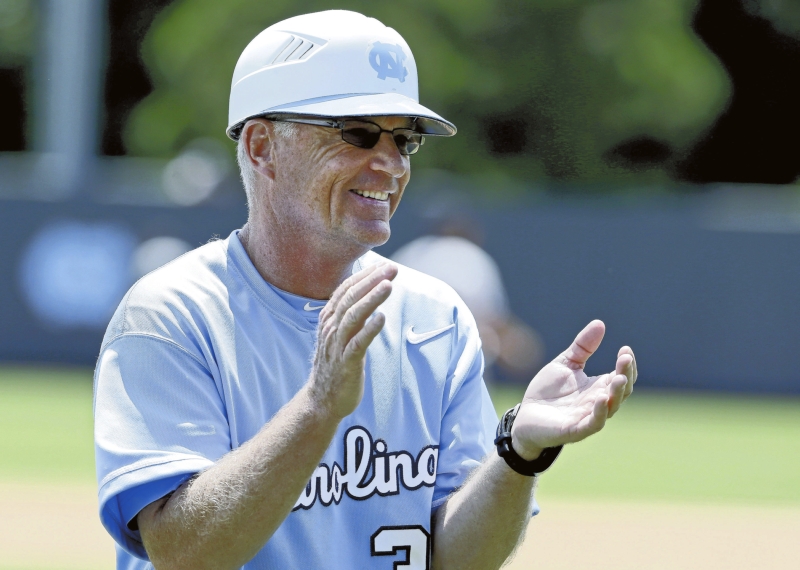 CHAPEL HILL (AP) — North Carolina’s baseball program is back in a familiar spot — atop its division in the Atlantic Coast Conference.

The Tar Heels have locked up both their sixth ACC Coastal Division title and at least the No. 2 seed in next week’s conference tournament.

At No. 2 in the latest RPI and ranked third in both major polls, they’re a lock to return to the NCAA Tournament after a two-year absence and should be a favorite to reach their seventh College World Series since 2006.

“It’s been satisfying (personally) but more importantly for this group of players, because they have really wanted to … kind of turn us back around,” veteran coach Mike Fox said. “They’ve been a part of the last two seasons, and they took it personally that, ‘Whoa, we came here because of the past, and we haven’t lived up to that.’”

North Carolina entered its final regular-season series against Duke having won 11 of 12 while already clinching its sixth Coastal title since the league went to divisional play in 2006.

There are obvious signs of improvement in all areas of the game. The Tar Heels have 51 home runs — they hit 67 of them in the past two seasons combined — and they rank fourth nationally with an earned-run average of 2.76 — nearly a full run better than in 2015, and a significant improvement over their 3.16 ERA last year. And in the field, they’ve committed 43 errors after they had 68 last year and 63 in ‘15.

“We’ve got a lot of (hitters) that are really good athletes, can run well and can put the ball in the gap or over the fence,” junior outfielder-first baseman Brian Miller said, adding that the pitching staff’s contributions have been “huge. You win in college with pitching and defense.”

The Tar Heels were left out of the tournament last year when they went 34-21 and in 2015 when they were 34-24, and a noteworthy — if sometimes overlooked — reason for those subpar seasons might have been the 2014 major league draft.

Six players who signed with UNC and would have been freshmen in 2015 were drafted in the first two rounds in ‘14, and they chose to go to the minor leagues instead of playing college ball. They would have been the nucleus of the two teams that might not have missed the tournament with them.

“Yeah, it hurts — any time you have players coming in, usually when you get hit with the draft in a class and you have that number, it hurts you three years later when those kids are supposed to be juniors,” Fox said. “Sometimes you can stand a year or two, depending on who’s returning and if you’ve recruited junior-college players. … It’s part of it. Injuries are a part of it. … I try not to look at it that way, because it’s over and done with. Keep talking about the past, we’re not into the future. It’s part of it, and every team in the country deals with that.”

The other members of that class have developed into the cornerstones of this team.

J.B. Bukauskas, who opted for college after being picked by Arizona in the 20th round that year, is a team-best 8-0 with a 1.80 ERA. Logan Warmoth, who went undrafted, leads the team with a .341 average and nine homers, and Miller is hitting .329.

At their preseason banquet, the Tar Heels marked the 10th anniversary of the 2007 team that reached the championship round of the College World Series. Fox said outfielder Adam Pate — one of only two seniors on the roster — told them that the current group hasn’t lived up to that standard “and we’re going to do that this year.

“I kind of fell out of my chair,” Fox said. “He said it with sincerity and a little bit of boldness, and … this group has done that.”