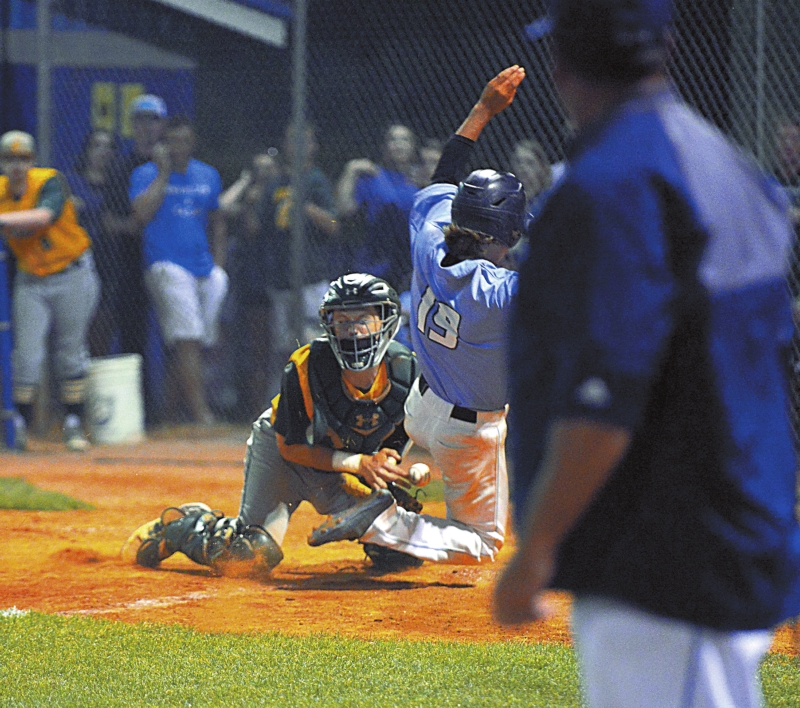 MOUNT ULLA — West Rowan’s Olen Stamper had gotten it done all night, but no one is successful every time in baseball. There’s a reason .333 hitters enter the Hall of Fame.

Stamper popped up in the infield with two men out and two on in the bottom of the ninth inning on a fastball thrown by lefty C.J. Mayhue, and Crest won an epic, 5-4 struggle against West Rowan in the fourth round of the 3A state playoffs.

Stamper carried the Falcons as far as he could on Friday, throwing six strong innings with seven strikeouts. At the plate, he singled home a run in the first for a 1-0 lead, knocked in a run with a hard-hit grounder to shortstop in the fifth to cut a 4-1 deficit to 4-2, and came through for the third time when he rifled a single through the left side to score pinch-runner Daniel Sell for a 4-all tie in the seventh.

West was down to its last strike when Stamper’s smash propelled the game into extra innings.

“We’re a team that never puts our heads down,” said Stamper, after the Falcons closed the books at 21-7. “Our crowd helped. We never stopped believing we could come back.”

West had every chance to play the entire game from in front instead of from behind, but the Falcons only got one run in the first inning despite slashing several rockets and having the Chargers (19-6) bloodied and on the ropes.

“What we’ve been doing to teams in the playoffs is scoring a bunch of runs in the first inning and putting a lot of pressure on them,” Crest coach Steven Hodge said. “West had a chance to do that to us tonight. It helped us a lot to get out of that first inning with just one run.”

Crest left fielder Riley Cash made a sliding catch in the first on a ball crushed by Austin Love. If he doesn’t make that catch, West probably scores quite a few. Then Crest starting pitcher Dylan Izzi settled down and struck out two Falcons with the bases loaded to escape the inning.

“It seemed like we were one hit away a lot of times tonight,” West coach Seth Graham said. “Credit their pitchers for getting outs in big situations.”

Crest took control of the game by mounting a four-run third inning against Stamper, a junior right-hander who had pitched a second-round no-hitter.

A leadoff walk and West’s failure to get an out on a bunt in front of the mound set the table for trouble. Leadoff man Riley Cheek sent a single whistling past the mound to tie the game at 1-all. After a sac bunt pushed the runners to second and third, Crest’s slugging catcher Logan McNeely, a Wingate signee, stepped in against Stamper — and Stamper made one of his few mistakes.

McNeely absolutely crushed a 1-0 pitch to left field, and Crest suddenly led, 4-1. McNeely trotted a few steps up the line, stopped and screamed at the Crest dugout in triumph.

“I knew it was gone as soon as I hit it,” McNeely said. “A fastball up and I put a smooth swing on it. I wasn’t trying to disgrace the pitcher or anything like that when I got excited, but I was trying to pump up my team.”

Stamper missed his location on that biggest single pitch of the game.

“We wanted to keep a fastball away from him,” Stamper said. “But it tailed back toward the middle of the plate.”

That one destructive swing put West in catch-up mode the rest of the night.

“We elevated a pitch to the wrong guy,” Graham said, shaking his head. “And then he really elevated it. Three-run homers decide a lot of games.”

Comebacks have been West’s hallmark, though, and Stamper shook off the blast to put up zeroes in the fourth, fifth and sixth.

In the bottom of the fifth, the Falcons closed within 4-3. Singles by Love and Atwood, a deep fly ball by Brandon Walton that advanced the runners, Stamper’s groundout, and a clutch, two-out hit by Jake Perez made it a one-run game.

But West’s seventh began with grinding walks by Brett Graham and Love. Atwood popped up a bunt attempt for the first out, and then Walton was called out on strikes on a borderline 2-and-2 pitch. Walton wasn’t thrilled with the call and was tossed for the rest of the evening. His absence would be felt in the ninth when his lineup spot came back around with men  on base, but Stamper picked up all the Falcons when he followed Walton with his game-tying base hit.

“Just a great ballgame, back and forth, both teams missing opportunities, but both teams really battling to stay in the game,” Hodge said. “West’s guys on the mound did a good job. Except for the three-run homer, they had us off-balance all night.”

Stamper would be followed to the mound by Daniel Durham, Pearce Wilhelm, and finally, Brett Graham.

Statistically speaking, the home team wins about 55 percent of the time in extra-inning games, but that wasn’t the case in Mount Ulla on Friday.

There was one key hit in extra innings, and McNeely was again the guy who produced it. His RBI-single in the ninth against Graham wasn’t crushed, but it knocked in Cash with the deciding run.

“It was a tough 1-and 2 pitch, and I just threw my hands at it,” McNeely said. “I was really happy to see that ball make it out to the grass.”

Graham and Love walked again in the ninth, as that inning started the same way the West seventh frame had. But Mayhue wasn’t rattled and made electric pitches.  The dangerous Atwood popped up. Cameron Graham struck out. Then Mayhue jammed Stamper on the game-ending swing.

“Mayhue is 100 percent fastballs, but he’s our closer, and he really likes that role,” Hodge said. “Just really thrilled that our guys could win a game like this in front of crowd like this. We played some games this season in front of 25 fans. Tonight, they’re lined up down the fence, and three deep everywhere you look.”

The crowd was huge and loud, especially as the Falcons, who had rallied from seven runs down in the third round, started making noise in the seventh.

“It was a great atmosphere, and it’s just really tough to win on the road,” McNeely said. “But we were tough enough to do it. Proud of my teammates.”

For West’s seniors, it was the end of a super run that has included two firsts in school history — three straight 20-win seasons and three consecutive conference championships.

“I’m proud of all of them, proud that they’ve laid the foundation for more good years,” Coach Graham said. “We kept fighting, we kept answering the call when we were down, we just couldn’t quite get it done tonight. But we’ve been in the fourth round twice in three years, and I know our guys will keep their heads up. We were there. We were right there, and we know that.”

Crest, seeded seventh, won its 13th straight game and will take on No. 2 seed Marvin Ridge in the 3A West championship series. Marvin Ridge topped Cuthbertson, 4-3.