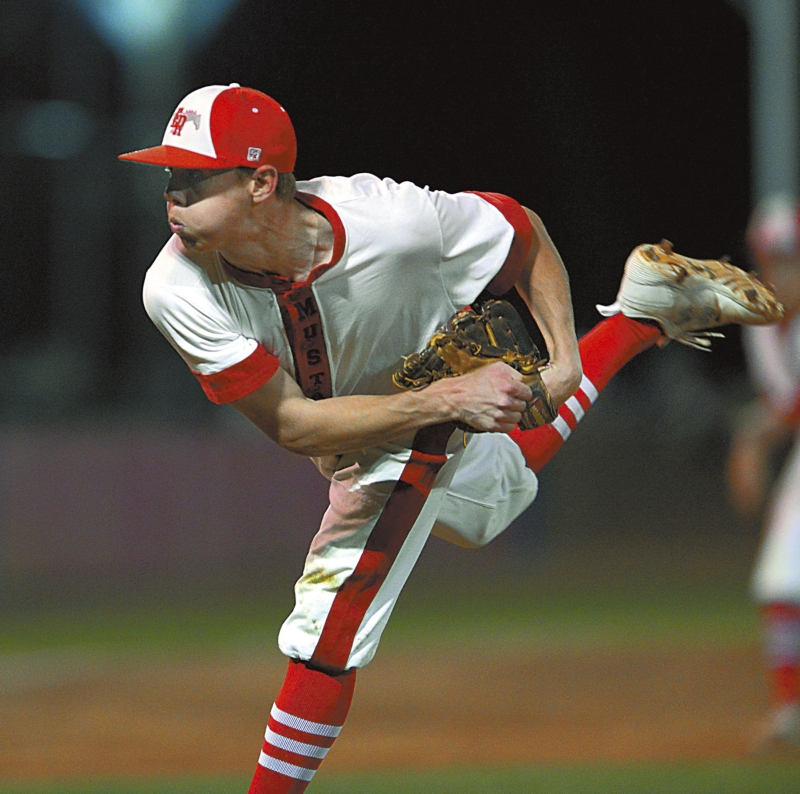 Wayne Hinshaw/for the Salisbury Post ... East Rowan pitcher John Owen, shown in a game in March against West Rowan. Owen announced recently that he will continue his education and baseball career at Pitt County Community College.

GRANITE QUARRY — East Rowan’s John Owen is headed to Pitt Community College, not because of any academic shortcomings or character flaws, but because he’s determined to prove he’s a Division I pitcher.

“It’s pretty simple, really,” Owen said. “I want to play Division I, and Pitt can help get me there. They’ve got great coaches and one of the top junior college programs in the nation.”

Pitt, located in Greenville, N.C., is a path that’s been chosen by several of coach Brian Hightower’s Mustangs before Owen. The most notable success story was Trey Holmes, who used Pitt as a springboard to the starting first base job for some exceptional Appalachian State teams.

Owen, who has added muscle and pounds to the modest frame he possessed last year, is now throwing fastballs as briskly as 88 mph, and he has a solid curveball and changeup. But he’s still 5-foot-10, and D-I schools don’t get excited about 5-10 pitchers.  There’s nothing Owen can do about his height, except to go to Pitt and show that he can continue to excel at that level.

“This is as good a kid as I’ve ever coached, a guy that I want my own son to grow up to be like,” Hightower said. “He’s put up unbelievable numbers and he brings a matchless work ethic to the game every day. He doesn’t want to let anyone down. That drives him to be the player that he is.”

Owen had a sensational year in 2016, both as an East Rowan junior and with the national runner-up Rowan County American Legion team.

He was 10-2 for the Mustangs, who went 18-9. He had a 1.14 ERA, 68 strikeouts and 13 walks in 67 2/3 innings. He threw seven complete games and had four shutouts on his way to South Piedmont Conference Pitcher of the Year honors. He accepted the Patrick Snider Award as Rowan County Pitcher of the Year, a staggering accomplishment in a county that includes ultra-talented hurlers such as West Rowan’s UNC-bound Austin Love and Carson’s South Carolina commit Owen White.

In the long Legion season, Owen was a durable workhorse, logging 84 1/3 innings with a 2.77 ERA and a 6-2 record. Rowan County had outstanding pitchers, including current Catawba freshmen Hunter Shepherd and Bryan Ketchie, but coach Jim Gantt handed Owen the ball for the first game of the state tournament, the first game of the regional tourney, and the opening game of the World Series. That said a lot. Owen was also on the mound in the national  championship game, taking the game into the eighth inning against a powerful Arkansas club, allowing two earned runs, and giving Rowan every chance to win the national title.

While a lot of people may be aware of how good Owen was last year, he was even harder to hit in a senior high school season that East Rowan concluded with a 16-11 record.

While Owen’s record was 5-1 this time, with two saves, there were three games in which he pitched “shutouts” but left the mound with no decision due to the new pitch-count rules. Twice he pitched seven scoreless innings, without getting the win, and once he left a 0-0 game after eight innings. His loss came in a 2-0 game against Carson in early March.

“There’s nothing you can do about those games where it’s hard to score runs,” Owen said. “You know you did your job, but so did the opposing pitcher.”

Owen faced 196 batters during this high school season and allowed one double, no triples and no home runs. Opposing hitters batted a quiet .152 against him. He allowed just 28 hits and five earned runs in 54 innings and put up an ERA  of 0.65. He struck out 83, while walking nine.

“Walking people is the thing I hate most,” Owen said. “I try to fill up the strike zone.”

He filled it up. All of Owen’s numbers — except wins — actually improved from his fantastic 2016 season.

“He always wanted the ball, and whenever we put him on the mound, it was a surprise if the other team scored,” Hightower said.

Owen is also a good position player, and there’s a chance he could swing the bat for Rowan County some this summer. Besides pitching, he played catcher, first base, third base and right field for the Mustangs as a senior. He was East’s third-best offensive player, after Chandler Blackwelder and Hayden Setzer. He hit .307 with two homers and he tied Blackwelder for the team lead in RBIs (19) and runs scored (24). He made four errors in 27 games, while using a lot of different gloves and mitts.

“He’s unselfish as all get-out,” Hightower said. “Whatever you need, wherever you need him, he’s going to give you his best. He did an awful lot of good things for us.”

Owen finished the season hot at the plate. He had 13 hits in the Mustangs’ last seven games.

“I was down around .200 a long time, but then I was able to finish the season at .300” Owen said. “Hitting is always fun and playing different defensive roles was fun.”

Owen will be back with the Rowan Legion team this summer, although he’s not sure exactly when he’ll be on the mound. He finished the season with some soreness that made it difficult for him to throw his curveball, but he hopes a little rest will get him back to 100 percent.

As soon as he’s healthy, he’ll get the ball.