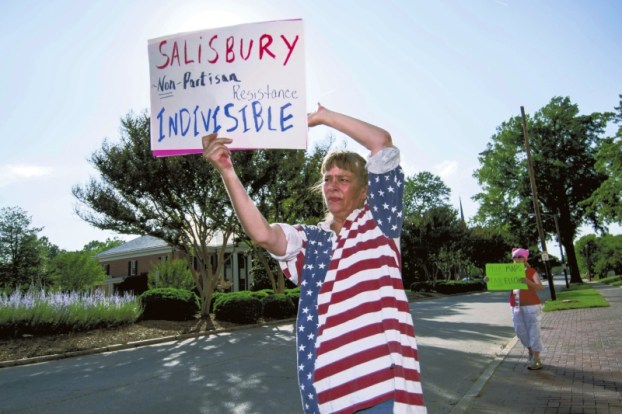 The race is on.

Unhappy with answers from state Rep. Harry Warren, R-Salisbury, during a Thursday night town hall meeting, Democrats have started raising money to assist his opponent in 2018.

The Rowan County Democratic Party on Friday sent a fundraising email about Warren to its members. The same message was posted on the party’s social media pages.

“Republican N.C. House Rep. Harry Warren proved last night at his town hall that his policies and agenda are disastrous for the people of N.C. House District 77 here in Rowan County,” the email says. “Donate as little as $5 today to the Rowan County Democratic Party to help resist and defeat him.”

Warren is serving his fourth term as the representative for the 77th District. A wave of activism has drawn larger-than-usual crowds to his town hall meetings in recent months.

The email criticizes Warren for his support of partisan school board and judicial elections, elimination of environmental protections, House Bill 2, greater restrictions on peaceful demonstrations and re-establishing voter ID requirements in North Carolina

“It’s go time, and we’re counting on your support to build a team to stand up to him and his agenda,” the email says.

It features an image of Warren with a red X over his face that is placed on the North Carolina flag.

The latest fundraising reports — from Oct. 23 to Dec. 31 — show $4,661 as the balance of the county Democratic Party’s campaign account. The Rowan County Republican Party had $3,443 in cash on hand in its latest finance reports. Warren’s campaign account had $1,320 in the most recent reports.

Warren faces re-election in 2018. If left unchanged by the General Assembly, filing for Warren’s seat would be in February and a party primary would be in May, according to the Rowan County Board of Elections.

Senators react to appointment of special counsel in Russia investigation

One called it a positive development. The other said he is an excellent choice.

Sen. Richard Burr, R-N.C., publicized his opinion through a joint statement with Sen. Mark Warner, D-Va. Burr is the chairman of the Senate Select Committee on Intelligence. Warner is vice chairman.

“The appointment of former FBI Director and respected lawyer Robert Mueller as special counsel for the Russia investigation is a positive development and will provide some certainty for the American people that the investigation will proceed fairly and free of political influence,” Burr and Warner said in the joint statement.

Tillis called Mueller an excellent choice and said he welcomes the appointment of a special counsel.

“He has a well-deserved reputation for fairness and independence from political pressure, and I have confidence he will lead this investigation with professionalism and impartiality, taking it wherever the facts may lead,” Tillis said in an emailed statement.

Both senators noted that the Senate Intelligence Committee is conducting its own investigation, too. Tillis said he hopes Mueller will work with the committee to ensure the investigation can move forward without obstruction.

The bill is numbered H.R. 2483 and titled Quality Systems Certification Act of 2017. It would create a voluntary program for companies to have their quality assurance system certified. The certification would last for two years. Companies could self-certify certain low-risk changes, a news release said.

“I continually hear from constituents about the rising cost of medical care, and I am always looking for common-sense solutions to solve this problem,” said Hudson. “By streamlining the approval process and cutting back regulatory burdens, this common-sense legislation will make the FDA more efficient and enable manufacturers to spend more time developing new innovations in patient care.”

Hudson’s news release says the bill would significantly reduce the Food and Drug Administration’s workload and allow the agency to focus on higher-priority items.