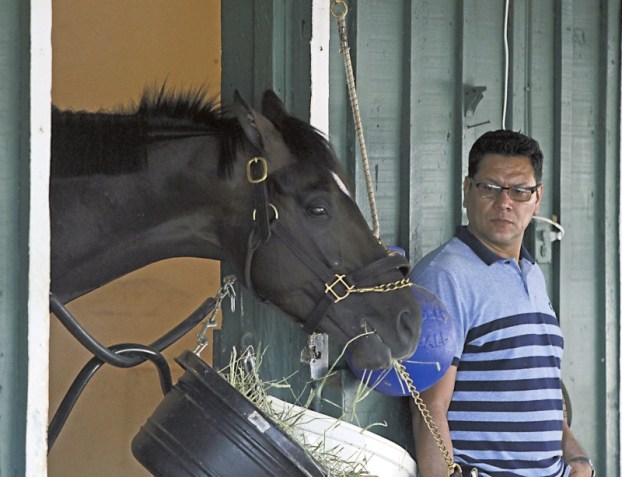 Juan Aguayo watches as Kentucky Derby winner Always Dreaming munches on his breakfast in Stall 40 of the stakes barn at Pimlico Race Course in Baltimore, Friday, May 19, 2017. (AP Photo/Garry Jones)

Always Dreaming looks very much for real as Preakness awaits

BALTIMORE (AP) — Always Dreaming has run away from the competition in four consecutive victories this year, winning by a combined 23 ¼ lengths.

The dark bay colt was never challenged in winning the Kentucky Derby by 2 ¾ lengths on a sloppy track at Churchill Downs.

Whether he does it again in the 1 3/16-mile Preakness at Pimlico on Saturday depends on a good trip, the tactics by his nine rivals and a little luck. Always Dreaming is the early 4-5 favorite under jockey John Velazquez.

“Always Dreaming hasn’t had many obstacles to face,” said Corey Lanerie, who will ride Derby runner-up Lookin At Lee. “Maybe he’s that good that he won’t encounter trouble. But you never know.”

After three consecutive days of 90-plus-degree heat, the forecast calls for a high of 68 and cloudy skies Saturday when the race goes off about 6:48 p.m. EDT.

Always Dreaming is a victory away from setting up a bid for the Triple Crown. Two years ago, American Pharoah became the first horse to sweep the Derby, Preakness and Belmont in 37 years.

“I’m someone who has been in a lot of races and lost a lot of races, so I know you don’t want to be overconfident,” trainer Todd Pletcher said, “but I do feel very, very good about the way he’s coming into it.”

In the Preakness, Always Dreaming will break from the No. 4 post, a spot that has produced 13 winners but none since Curlin in 2007. One spot over on his outside will be Classic Empire, last year’s 2-year-old champion who finished fourth in the Derby after getting knocked around coming out of the starting gate.

“If anything, I have a greater respect for Always Dreaming,” said Mark Casse, who trains Classic Empire. “I think he’s going to be tougher to beat than I thought he would be going into the Derby.”

As the Derby champ, Always Dreaming will have a bulls-eye on his back in a smaller field going a shorter distance than two weeks ago.

“I would imagine that they are going to target us and the target is right next to you,” Pletcher said. “We’re just focused on hopefully breaking cleanly and smoothly and letting him run to the first turn a little bit.”

Neither Velazquez nor Pletcher has won the Preakness. Velazquez is 0 for 7, with his best finish being second in 2011 aboard Kentucky Derby winner Animal Kingdom. Pletcher is 0 for 8, with his highest finish coming in 2000 when Impeachment was third.

Conquest Mo Money, a 15-1 shot, has consistently run at or near the lead in his five career races. Always Dreaming and Classic Empire have also shown speed.

Casse’s ideal scenario involves Always Dreaming and Conquest Mo Money dueling in the early stages. If the pace is too fast, it gives closers a chance to make a winning run at the end.

“We sit behind and watch,” he said.

Even with Always Dreaming’s dominance this year, eight of the past 12 Derby winners did not win the Preakness.

There’s a posse of contenders that would love to extend that history.

One of them is Conquest Mo Money, who supplemented to the Preakness for $150,000.

He could use his speed to pressure Always Dreaming early or go for the lead outright. Another is Cloud Computing, who figures to be sitting just off the leaders.

Lookin At Lee is a closer who could come running late under Lanerie.

“I love the way my horse finishes,” he said. “He’s taken on everything you could throw at him.”

Other closers looking to pounce are Gunnevera (10th in the Derby), Hence (11th in the Derby) and new shooters Multiplier, Senior Investment and Term of Art.

NASCAR hoping the tires return the magic to All-Star race