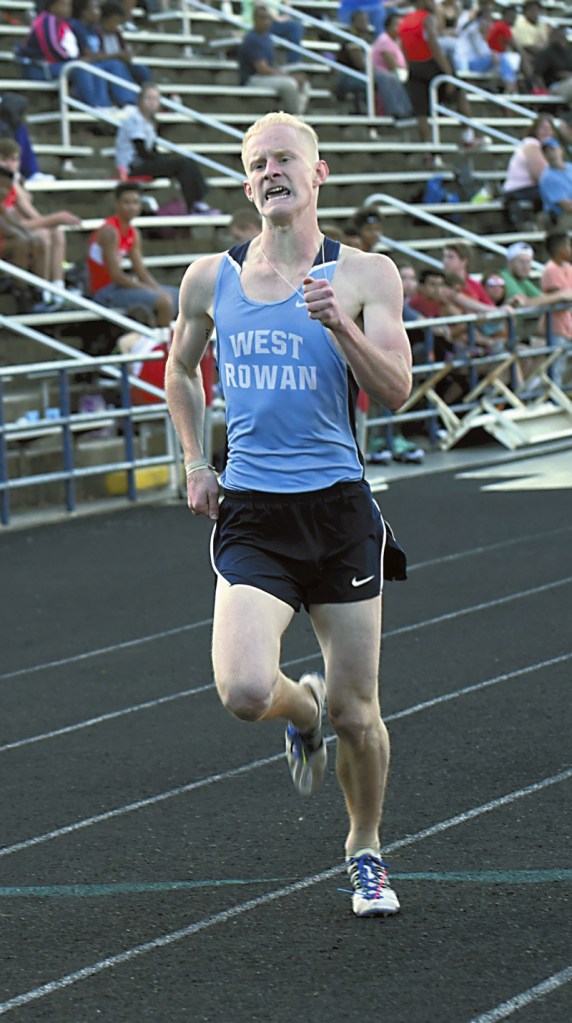 West Rowan’s Cameron Butler, shown winning the 400 meter race in the Rowan County meet this year. Butler announced recently that he will continue his education and track career at Coastal Carolina University. ... Photo by Wayne Hinshaw, for the Salisbury Post

MOUNT ULLA — West Rowan High senior Cameron Butler, a Coastal Carolina University signee who combines the endurance of a cross country competitor with the wheels of a sprinter, will run his last high school race today.

Butler will compete in the 800 meters in the 3A state championships on the Irwin Belk Track at North Carolina A&T. He’s not the favorite, but he has a chance to win. He blazed a school-record 1:57.08 in the 800 in the South Piedmont Conference Championships held at East Rowan and is one of the top 10 runners in the event in county history.

“He might be the best middle distance runner I’ll ever get a chance to coach,” West coach Scott Foster said.

The pace was too fast, almost flat-out, in Butler’s historic 800 in the SPC Championships.

In last week’s 3A Midwest Regional at Marvin Ridge, Burgess placed third and Butler was fourth. Both were in the 1:59s, but Butler wasn’t after a PR. The objective of the regional race is simply to qualify for the state meet. The top four advance.

“I played it safe in the regional, just needed to qualify,” Butler said. “But the state race will be different. It’s going to be a fast field and a fast track, and I can’t hang back. My goal will be to get out and control the race.”

Before he tries to control his last high school event, Butler will go through his standard pre-race ritual, honoring the memory of his father who passed away in September, 2012, when Butler was an eighth-grader.

Michael Scott Butler, who went by Scott, was diagnosed with cancer when his son, Cameron Scott Butler, was in the sixth grade. Scott fought the disease for 18 months before succumbing to multiple brain tumors.

“I wear a cross with my dad’s birthday engraved on the back of it,” Cameron said. “Before each race, I’ll kiss the cross and point to the sky. One thing I remember about him is that as he got sicker, his faith got even stronger. I try to run my hardest for him.”

When he first tried running in the seventh grade at West Rowan Middle School, Cameron wasn’t an overnight success.

“The track was just somewhere I could go to have some  fun,” Butler said. “I didn’t realize I could really be any good at it until my freshman year with Coach Foster.”

In the winter months, Butler competes in indoor track and has qualified for the state meet three times. He placed a close second to Marvin Ridge’s Mason Bhatia in the 1000 meters in the NCHSAA Indoor Championships last February in Winston-Salem. Butler ran a school-record 2:37.22. That’s when recruiting interest started to pick up.

“I’d just about accepted the fact that I would be going to college as a regular student,” Butler said. “Recruiting was really slow and I’d only been contacted by some D-III schools, but after the indoor state meet, more schools, including Coastal Carolina, got interested. I ended up making a visit to Coastal. It’s a great school with a very good track program. It was a pretty easy decision.”

He now owns four school records, two individual and two relays. In addition to the 800 and 1000 meters, he teamed with Juwan Houston, J.T. Sanders and Joel  Thomas-Morales for West’s 4×400 record and he combined with Burgess, Thomas Waldo and Michael Anton for a new Falcon standard in the 4×800.

“Coastal is getting a great student and a great runner.” Foster said. “Cameron has always done everything the right way.”

Where’s the drama? Blowouts the rule in these NBA…