Laugh your head off at ‘Boeing Boeing’ at Lee Street theatre 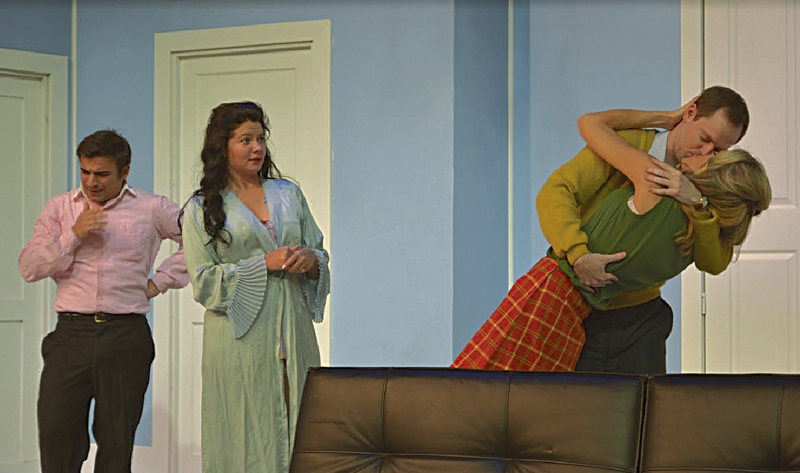 It’s silly, it’s sexy and there are seven doors on stage.

That’s all you need to know about “Boeing Boeing,” a farce making audiences laugh a lot at Lee Street theatre.

It is a French play, translated into English, set in the 1960s, when love was free and the more you had of it, the better off you were.

In this case, Bernard is a clever man who relies on timetables to juggle three lovely air hostesses — as stewardesses were known in those days — all of whom are engaged to him and at home in his Paris apartment.

Jacob Brayton is nervously hysterical or cooly confident in his role of Bernard, the man who likes variety. His physical comedy drew gasps at several moments, and he plays unglued as if he’s been there himself.

Really, the entire small cast is good and loud and having a blast.

Jessica Walker, with her broad French accent, is Berthe, Bernard’s long-suffering maid. Walker’s physical comedy is way over the top, and hilarious. Her looks of disgust, amazement or confusion are real mugs, but nothing here is serious, anyway.

Tim Campbell is Bernard’s school friend, Robert, who stumbles into Bernard’s crazy scheme of being engaged to three women who never see each other because of their flight schedules — until now.

Brash New Yorker Gloria is the first to arrive, with her pink and orange TWA uniform.

Gloria is all about experiences, and Caitlin Billings plays her with a certain aggressive curiosity.

Gabriella, the feisty Italian, arrives next, played by Sara Dover. Dover is passionate and high-strung as the dark-haired girlfriend who flies for All’Italia.

And then Gretchen arrives, a statuesque German of barely controlled passions, played by Sara Lee. She works for Lufthansa.

Notice all the G names? That makes it easier on Bernard, and if he slips up and starts to call Gloria Gabriella, he can mumble-stumble his way out of trouble.

All three are engaged to him and spend the odd day or three at “their” apartment. Berthe has to be quick on her feet to remove traces of Girlfriend No. 1 before Girlfriend No. 2 arrives.

On the day we meet Bernard, he is at his scheduling peak. Gloria has spent the night and is on her way to the West Coast. Gabriella is coming for lunch, a short layover before she flies out again, and Gretchen is scheduled for dinner.

Gabriella must have Italian food, and Gretchen insists on hot dogs and sauerkraut. Berthe does not approve of this, either, but she plays along. Life is always interesting at Bernard’s apartment.

Robert’s arrival complicates things, as does the debut of new Boeing jets that are faster than ever, meaning the timetables are going to change and the arrangements are going to be even tighter.

Robert, a sort of sad sack at first, blossoms into a lusty young man, besieged by close calls and the shifting attentions of two of the girls.

Tim Campbell plays for laughs and juggles his calmer and crazier sides so well. He, too, has to do a lot of physical comedy, which he manages with flair and a madness barely under control.

Can he help it if Gretchen pounces on him when she thinks he is Bernard?

And he can’t stop Gloria from experimenting and exercising her lips in a series of kisses punctuated by words like “Shazam!”

Brayton, as Bernard, is a compact lothario, lending visual comedy to some scenes, especially with Gretchen, who seems to be 7 feet tall.

Touch her and she’s turned on — all the way to high. She gets too close and personal with Berthe, with Robert, with anyone, really.

Gabriella is very vocal about what she wants and does not want. Her emotions are all out there for everyone to see.

Gloria is very vocal about what she will and won’t do, and she gives Robert a lecture about why women have to be in charge.

Everyone is having a blast during this fast-paced comedy, including the audience at the sponsor night performance. The set is simple and right for the time period and all the physical gags. It’s brightly lit, so the expressions of all the actors are well-illuminated, and the girl’s uniforms are straight out of the ’60s.

It’s a great way to have a few belly laughs and includes one 15-minute intermission in a slightly more than two-hour evening.

This year’s Rowan Rose Society Rose Show will be…