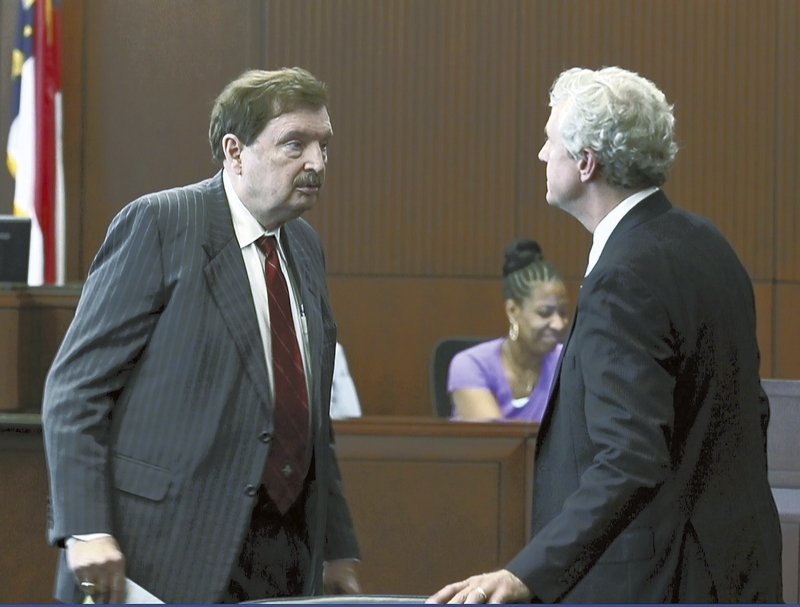 Former North Carolina legislator Fletcher Hartsell, left, confers with his attorney Roger Smith, right, after he appeared in the Wake County courthouse Friday morning, May 19, 2017, in Raleigh, N.C. Hartsell, who investigators say spent more than $200,000 in campaign funds on vacations, speeding tickets, haircuts and other personal expenses received probation in state court on Friday, following a federal judge's decision to send him to prison. Hartsell pleaded guilty on Tuesday, May 16, in federal court to three federal tax and fraud counts. He received eight months in prison and was ordered to pay $63,500 to the IRS. (Chris Seward/The News & Observer via AP)

RALEIGH — Former state Sen. Fletcher Hartsell of Concord, who investigators say spent more than $200,000 in campaign funds on vacations, speeding tickets, haircuts and other personal expenses, received probation in state court Friday, following a federal judge’s decision to send him to prison.
Hartsell, 70, was a Republican senator for 26 years before he decided against another run last year. He had become the longest-serving lawmaker in his chamber, with leadership positions under both GOP and Democratic majorities. A joint campaign finance investigation ultimately found he broke state and federal laws.
Hartsell pleaded guilty to three state counts of filing false campaign reports. Superior Court Judge Donald Stephens gave him a suspended sentence and 18 months’ unsupervised probation, essentially agreeing with Wake County District Attorney Lorrin Freeman that his federal punishments are enough.
Under sentencing laws, Hartsell could not have received prison time for the state charges in any case.
A federal grand jury last fall indicted Hartsell on more than 20 counts involving a decade of expenses. He pleaded guilty to three federal tax and fraud counts and was sentenced Tuesday to eight months in prison and $63,500 in restitution to the IRS.
“I am sorry you are here,” Stephens told Hartsell, who stood to hear his punishment.
“It’s a great disappointment to have been such a fine legislator and with such an esteemed reputation, and then have it end this way is just most, most unfortunate,” the judge said.
Freeman said Hartsell, while serving as his campaign committee’s treasurer, “engaged in a pattern of deception in which he made multiple disbursements from his campaign account to himself or to other entities for personal expenses.”
The use of campaign funds in North Carolina is essentially restricted under a 2006 state law to expenses tied to running for or holding public office and to charity.
The prosecutor said Hartsell forwarded campaign money to a property management company he and his wife ran to pay for upkeep of a building it owned and leased out. Funds also were moved to Hartsell’s law firm and to pay tens of thousands of dollars in credit card bills.
“There is nothing that does more to erode the confidence of the public than to have a long-serving senator come to plead guilty to felonies in open court,” she said.
Hartsell declined to comment after the hearing, walking to the courthouse elevator with his wife.
His lawyer, Wade Smith, called it “the darkest moment in his life” but said the outcome will not define him.
“While this prosecution is absolutely correct … it did silence one of the great voices of moderation in North Carolina, and that’s to our everlasting harm,” Smith said.
Hartsell must report for federal prison July 12. 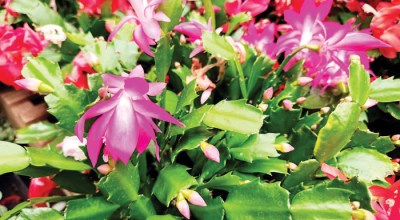 A vast array of bloom colors in the holiday cactus category