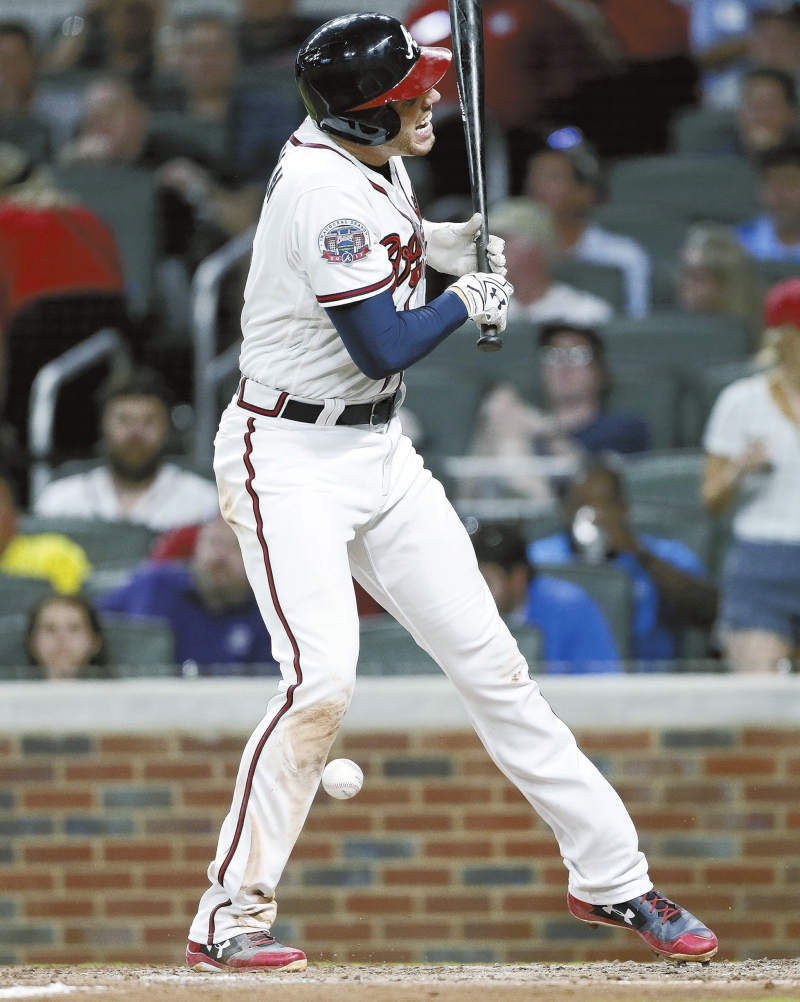 AP Photo/John Bazemore ... Atlanta Braves’ Freddie Freeman reacts after being hit by a pitch during the fifth inning of Wednesday night’s baseball game against the Toronto Blue Jays, in Atlanta. Freeman suffered a broken left wrist and will be sideline for about 10 weeks.

ATLANTA (AP) — The Braves are looking for help at first base after losing Freddie Freeman for about 10 weeks due to a broken left wrist.

President of baseball operations John Hart says he knows no player can replace the production lost by the injury to Freeman, who shared the major league lead with 14 homers and was hitting .341.

Freeman was hurt when hit by a pitch from Toronto’s Aaron Loup during the fifth inning of an 8-4 victory over the Blue Jays on Wednesday night.

Hart said losing Freeman is “devastating news for the ballclub.”

The Braves signed free agent James Loney to a minor league deal. Loney, 33, hit .265 with nine homers in 100 games for the Mets last year and was released from a minor league contract with Detroit this month. He is expected to join Triple-A Gwinnett.

Coppolella said re-signing Ryan Howard, who was released from Gwinnett on May 8, was not an option.

Jace Peterson, a utility player who has spent most of his time at the middle infield spots, started at first base in Thursday night’s game against the Blue Jays.

“We couldn’t find anybody that could do what Freddie does,” Coppolella said. “He was arguably the best player in the whole league.”

Hart said Freeman’s injury was especially tough “with the historic year he was putting together.” Freeman ranks among the NL’s top three in homers, runs, extra-base hits, slugging percentage and on-base percentage.

“The more disappointing fact is we had started playing good baseball as a team,” Freeman said. “I never play this game for myself. I just come in every day to try to help this team win and get back to the playoffs because it has been four years. … I could care less about personal statistics at this point.”

Freeman, wearing a green cast, said he knows Loup did not intend to hit him with the pitch.

Freeman said he feared a break when first examined by assistant athletic trainer Jim Lovell on the field. Lovell “told me to squeeze his hand and obviously I couldn’t do it,” Freeman said.

Surgery will be necessary.

Rio Ruiz was recalled from Triple-A Gwinnett to start at third base against the Blue Jays on Thursday night.

“I’m not going out there to do what Freddie Freeman does,” Peterson said. “I don’t think that’s possible.”

Ruiz played in five games with Atlanta last season. The 22-year-old was hitting .262 with four homers and 16 RBIs in 37 games with Gwinnett.

Atlanta placed third baseman Adonis Garcia on the disabled list with Achilles tendinitis before Wednesday’s game. The Braves hoped offseason addition Sean Rodriguez would have been the fill-in for Freeman this season, but Rodriguez may miss the full season with a shoulder injury sustained when a vehicle he was driving was rammed by a stolen police car in Miami on Jan. 28.

Hart said an option is to move right fielder Nick Markakis to first base. Hart said that plan was not “met with a lot of love.”