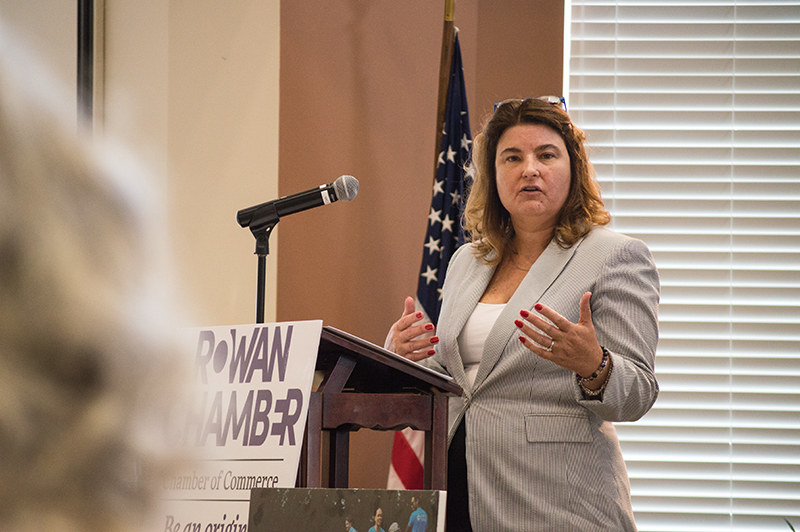 Beaty spoke at the Rowan County Chamber of Commerce’s Power in Partnership Breakfast. She focused on the DOT’s priorities under newly appointed Secretary Jim Trogdon, which include spending money more rapidly for approved projects and allowing local staff to handle construction that costs between $1 million and $2 million.

Currently, only 78 percent of funded road construction projects get completed on time, she said.

“That’s really not good enough,” She said. “So we want to increase the delivery rate.”

By ensuring that more road projects meet deadlines, she said, more projects will be completed in the same amount of time as before, she said. Currently, DOT is projected to complete 431 road construction projects in the next 10 years. Beaty said that number will increase to more than 500 after changes to internal processes.

Completing projects more quickly reduces the amount of cash on hand that’s waiting to be spent, she said. That pool of cash is currently $2 billion. Beaty said Trogdon wants to decrease the cash on hand to less than $1 billion in 18 months.

“We’re really rolling up our sleeves and getting to work,” Beaty said.

To help road construction move smoothly, she said, projects that cost between $1 million and $2 million would be handled at the division level. DOT’s divisions cover multiple counties. Rowan is in Division 9, which also includes Davie, Davidson, Forsyth and Stokes counties.

Sometimes, projects are handled more effectively at the local level than in Raleigh, Beaty said.

Another important priority, she said, is reducing traffic-related fatalities.

“North Carolina is a vision zero state, and that means that we really want to see no highway fatalities and that’s going to take all of us and it’s going to take a concentration on how do we change driver behavior. Engineers are going to build the roads to be as safe as they know how to build it.”

“These are numbers we do not want to see rise,” she said.

She said it is DOT’s job to try to change behavior and work with law enforcement to reduce traffic fatalities.

After her speech, Beaty answered questions from people in the audience. One focused on the completion date for Interstate 85 construction. DOT Division 9 Engineer Pat Ivey helped with the answer.

Ivey said the widening of I-85 and construction of an interstate exit at Old Beatty Ford Road are both ahead of schedule. He said fall 2019 is the completion date for both projects, which are currently underway.