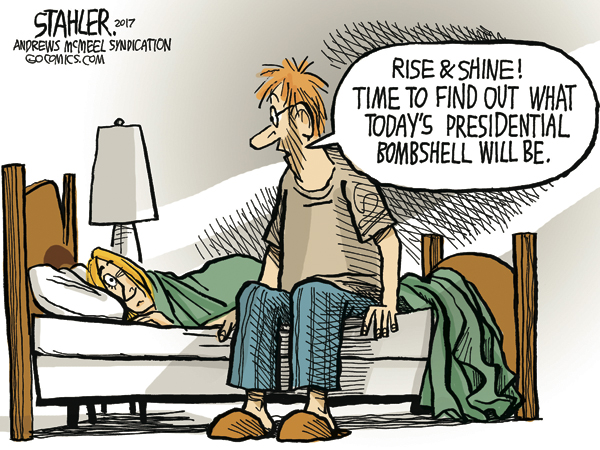 … Leonard Pitts:  How much proof do you need?

Pitts is the Florida poster child for canard-spreading morons. Here’s a few examples:

2. (Trump) “accused of asking director for oath of personal loyalty.” Operative word is “accused” as in, by loony left politicians and their lapdog “news” media. Zero foundation.

4. “Trump’s blabbermouth will likely chill our relationship with that third party.” (Israel) Right! Trump is the only friend Israel has had in the White House in eight years. Keep dreaming, dummy.

5. “Consider the damage Trump has done in just four months.” His only damage has been to D.C. swamp rats and the socialist-minded left politicians and “news” media wallowing in that smelly excrement.

6. Finally, “Donald Trump is stupid.” Exactly right, Pitts. That’s why he is a multi-billionaire president of the U.S. and you’re stuck in some moth-eaten office in Miami typing out lies and unfounded speculations for liberal newspapers to print!

… My Turn, Ralph Walton: We cannot
live by Fox alone

Mr. Walton has a point about not getting all of your news from sources that just serve to reaffirm your preconceived biases. Anyone concerned about current events should make a point of being informed and that means understanding all sides of an issue.

Can you imagine what such news giants such as Walter Cronkite and Chet Huntley would have thought, or did think, of Fox news?

You either watch a lot of Fox News to be such an expert or you are relying on another news outlet to tell you what to think. Don’t like it, don’t watch it.

Frankly, I think anyone who relies on any major news medium for their information is a fool. I am just surprised there are any conservative-minded people still around after 70 years of left-leaning liberal network indoctrination.

… Letter: God is on Trump’s side

Wait, what? How? Lord have mercy.

God must be on Russia’s side then. The Marmalade Moron gave away top secret info. Looks to me more like Satan roams the White House halls now.

So God went over to the dark side, like Darth Vader.

Yes, God sent his anointed, his champion to save us, his rebuke to the evils of the world, his chosen King.

His name is not Trump, it is Jesus, and we need no other; the job of Messiah is taken.

But Jesus was not what we expected. He sought not power, nor wealth, nor fame. He commanded no armies, ruled no nations, owned no mansions, offered no safety. He did not see equality with God as a thing to be sought after, but humbled himself. His Kingdom was not of the world, and his victory was not about politics.

His mission was “to bring good news to the poor … to proclaim release to the captives and recovery of sight to the blind, to let the oppressed go free, to proclaim the year of the Lord’s favor.” So we crucified him. Oh, make no mistake: the America that elected Trump would eagerly crucify Christ.

Regardless of what political party you are, I can’t believe that our loving God would condone a man who would:

• Make fun of a man with physical problems.

• Brag about despicable acts to females.

• Belittle every candidate of his own party (and countless others).

• Get caught in numerous lies.

• Slam our great agencies protecting us.

• Have the support of white nationalists and the KKK.

• Urge attacks on protesters that opposed him.

And so much more.

I agree. Comey was wrong commenting on the Clinton investigation, but the timing of his dismissal doesn’t pass the smell test. If that is truly the reason he was fired, why wait until the Russia investigation heats up? This happened after he asked for more resources and daily briefings. I’m surprised this fact doesn’t seem to concern you.

Sessions is not supposed to be involved in the Russia-and-Trump investigation at all because he chose to lie to the Senate. Yet the memos were drafted at Trump’s request because, by his own words, he was upset about the Russia investigation. I have no doubt Trump will try to get a head for the FBI who agrees with the Trump view.

Our democracy is in trouble, and all most of the GOP cares about is protecting Trump.

… Letter: Bring on the special prosecutor

Yet another unhinged leftist. You people should seek some help for those mental issues.

I am neither leftist, nor unhinged. I am an American who understands that our government is being undermined by interference from the Kremlin. And I don’t need to name-call or resort to insults to make myself feel important.

Thankfully, Americans of all stripes understand that now is the time to put country over party. We can be especially optimistic that a new special prosecutor has been assigned.

… My Turn, Susan Beard: My activism is new, but my role model isn’t

Wonderful tribute, Susan. She sounds like a loving and smart mom.

I feel the same way about my mom, who taught me to look for the good in all and help those who need support.

And, like you and Ralph, I too am a Democrat and proud of it. Our history shows our country pulls together in tough times, and I feel this will happen again.

Thanks. I hope this prompts others to think more about what is happening in our present situation in D.C., Raleigh and Rowan County.

It seems the High Rock Dam has been an overall blessing to our region. It has given us virtually unlimited fresh water supplies, increased recreational opportunities, enhanced quality of life as well as property values, and fewer catastrophic floods. Perhaps dredging/mining on a larger scale could solve some of the silt problems. And Cube Hydro is committed to being a good steward by investing in oxygenation technology.

I’m not certain what the alternative options would be, but maintaining the dam under the hydroelectric licensing, as granted, really does seem to be a win-win for nearly all stakeholders — except perhaps the American shad.

This truly is a wonderful program, and Chaplain Taylor is so dedicated to the cause. Thank you for all you do.

These students will remember this for the rest of their lives. For some, it will be the only time they get to do something this wonderful.

So, even though I don’t have a child there, I want to say a big thank you to the people who raised the funds for these students to experience such an exciting trip.

Naming the street after William Peoples would be a great gesture and honor, because William deserves such an honor for the way he lived his life. Yes, council members, you should honor him.

However, this does not wipe away the act of gentrification that was committed against blacks on the West End!

This is definitely a good idea.

… Salisbury girls fall to CATA in 2A soccer playoffs

Thank you, David Shaw, for writing this amazing article and thank you, Jimmie Anderson, for adding the awesome action photos.

Congratulations to the Salisbury and CATA soccer players for playing with such tenacity and determination.

Thank you to the coaches for believing in our girls. Both teams have made your friends, families, and fans very proud!

Not the ending we wanted, but the girls gave it their all. Salisbury girls will be back next year with a fresh crop of talented freshmen.

Kudos to Coach Parrish for his hard work and commitment to the soccer team.

The West Rowan area could use a library. It’s been long in the waiting; maybe we can get it built soon.

East Spencer could also use a library. Might wish to put that idea on a waiting list too.