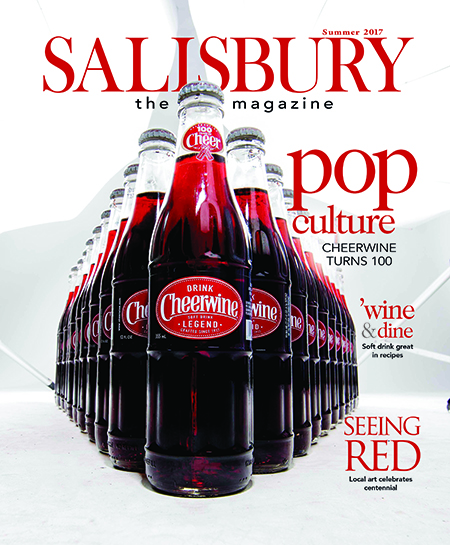 Message from the Editor of SALISBURY the magazine, Mark Wineka:

For two straight years, my oldest son, Sam, had one of those summer jobs you dream about, and you never had to remind him what a good gig it was. He knew. With a different college buddy each summer, he traveled through the Southland handing out free Cheerwine at places such as shopping centers, concerts, community festivals and on the beaches.

Sam and his friends also took photos and wrote a blog about the people they met along the way. Make no mistake, it’s pretty easy to meet folks when you’re handing out Cheerwine. The headquarters in Salisbury made sure various distributors were ready to load up the college kids’ van when they came rolling in for a new stockpile and another place to spread the cheer, so to speak.

If you haven’t figured it out by now, much of this issue is dedicated to Cheerwine, the Salisbury soft drink which is celebrating its 100th birthday. It’s fair to say a true North Carolinian loves at least three things: basketball, barbecue and Cheerwine.

The “Nectar of Tar Heels,” Cheerwine is known for its wild cherry flavor, fizziness, sweetness and for how well it goes with different foods, especially barbecue.

The Cheerwine story includes five generations of the same family who have guided the company for an entire century. That’s remarkable in itself. Cheerwine also is a tale of incredible brand loyalty. It seems once you’re hooked, you’re hooked for life.

A transplant from the North, I personally became a Cheerwine devotee many years ago when I was walking the golf course at Corbin Hills on a hot summer day. I’ll never forget how a fountain Cheerwine over crushed ice quenched my thirst back at the clubhouse, and I became a true believer then.

Years later, I even entered the Miss Cheerwine contest, and the company named me the honorary winner. But that’s another story, and one you should not tell your children.

In celebration of Cheerwine’s birthday, Salisbury the Magazine is giving you a quick 100 nuggets of information about the soft drink, which will have a downtown celebration in Salisbury May 20.

We also put out a call for Salisbury artists to give us their takes on Cheerwine, and we received a wide range of things to share — from photographs, to paintings, to drawings, to even Cheerwine-inspired fish.

Cheerwine is a pretty delicious ingredient in all kinds of food, and Deirdre Parker Smith offers some Cheerwine recipes for barbecue sauce, cupcakes and sangria you might want to try yourself. Andie Foley goes behind the scenes at Windsor Galley in Salisbury and reveals how the shop makes intricate, locally inspired charms that even include a vintage Cheerwine can and bottle.

Mark Ritchie, retired chief executive officer of Carolina Beverage Corp., tells us what it was like growing up as a Cheerwine kid.

David Shaw writes his first article for Salisbury the Magazine and takes us down to the courts at Salisbury City Park, where a steadfast group of guys have been playing tennis three mornings a week for decades.

Mount Zion Missionary Baptist Church is a lot older than Cheerwine and is celebrating its 150th birthday this year. You’ll see just how historic this church is, and speaking of history, few Salisbury houses are more celebrated for their history than the Hall House on South Jackson Street.

Hall House docents share some of their inside scoop on the house, and you’ll learn a lot about Dr. Josephus W. Hall, who was a surgeon for the Salisbury Confederate Prison.

There’s one more footnote to my son’s connection to Cheerwine. The summer after he graduated from college and before he took an internship with the Hartford Courant, he and some other newspaper interns were flown out to the University of Nebraska in Lincoln for some pre-instruction.

Imagine Sam’s surprise when he went to a dining hall on his first day, and one of his soda fountain choices was Cheerwine. He introduced his fellow interns to the bold red drink and discovered once again it’s easy to make friends when you’re handing out Cheerwine, even in Nebraska.

Copies available by subscription, at select locations in Rowan County and at the Salisbury Post (131 W. Innes Street, Salisbury)