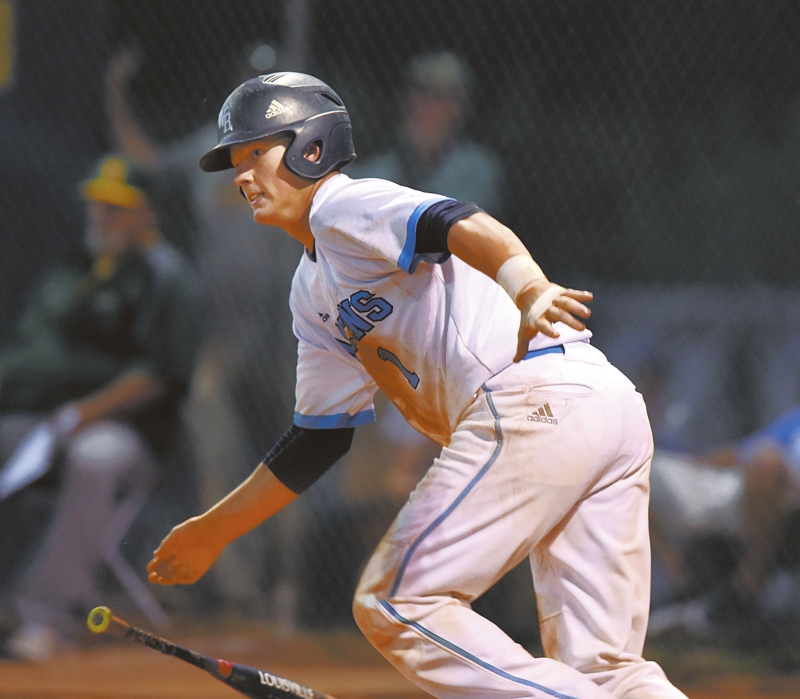 “Well, it was right at the end of the American Legion season,” Atwood said. “Coach Gantt just walked up to me and said, ‘How would you like to come to Catawba?’ My answer was, ‘Yes, sir.'”

Whenever Rowan County’s national runner-up summer of 2016 is discussed, Atwood is going to be part of the conversation. Atwood was the guy whose clutch hit at Wingate University won the state-championship game against Union County. That bouncing single over a drawn-in infield, like Juan Garcia’s mammoth homer that preceded it, created lifetime memories.

“When you talk about Atwood, all you have to know is he was good enough to be the starting catcher for a Legion team that finished second in the nation,” said Seth Graham, who serves as West Rowan’s head coach and is of Gantt’s assistants on the Rowan County American Legion team. “Atwood is a really good catcher first, but he’s also a very good hitter.”

As far as high school ball, Atwood’s first varsity at-bat as a sophomore remains his most memorable swing. His debut has been hard to top.

It was April 10, 2015, getting pretty late in the season, when Atwood was called up from the jayvee team.

“My first varsity game was against Northwest Cabarrus and we were at home,” said Atwood, smiling at the memory. “Alex Rodriguez (now at Wingate) was pitching for Northwest. He threw me a curveball and I hit a home run over the Blue Monster.”

Atwood became an important cog in West’s strong finishing kick to the 2015 season. He batted .333 in 12 games and he came through with key hits in 3A playoff wins against Hickory and Forestview. West reached the fourth round before losing a thriller at Marvin Ridge.

Atwood’s role grew as a junior as West won its second straight South Piedmont Conference championship. He was steady. He batted .312 with 19 RBIs.

“He became a really good catcher by working so hard at it year-round,” Graham said. “He’s really good at blocking balls in the dirt and not letting anything get by him.”

Atwood was a first-year starter for the Legion team last summer and produced a .321 batting average with 31 RBIs while handling the grueling demands of catching in the summer heat.

He went 2-for-3 in the regional championship game in Asheboro against South Carolina and he caught all five Rowan games in the World Series in Shelby.

That sensational summer proved  a springboard for Atwood’s strongest high school season. He’s maintained his strong defensive work as a senior, and he’s been one of the county’s most productive offensive players. He’s batting .374 with 10 doubles, two homers and 24 RBIs. He was as important as anyone in West winning its third straight SPC title.

In a two-game stretch against Concord and Cox Mill, Atwood had seven hits. In a back-to-back rampage against South Rowan and Central Cabarrus, Atwood drove in seven runs.

Atwood has kept it going with five hits in West’s three playoff games. He now has 68 hits and 49 RBIs in 2 1/2 high school seasons. Playing time at Catawba should come early for Atwood, who has accumulated more walks (28) than strikeouts (26) during his high school career.

The high school excitement isn’t over yet. Atwood will be counted on when West hosts Crest tonight at 7 p.m. in a fourth-round contest in the 3A state playoffs.

NOTES: West has a lot of pitching options available tonight, but junior right-hander Olen Stamper (4-0, 1.21 ERA) is almost certain to get the call. Stamper pitched a no-hitter in a 1-0 second-round win against Canton Pisgah. … While fourth-seeded West (21-6) has relied mostly on pitching and defense, seventh-seeded Crest has been punishing baseballs and has won 12 straight games. Crest has scored early and often and has put up at least five runs in every game it’s played in April and May. In the playoffs, Crest won 12-2 against SW Randolph; 9-5 against Carson, and 5-2 against top-seeded Ledford. … Riley Cheek and Logan McNeely lead Crest’s offense. The winner of tonight’s game takes on the Marvin Ridge-Cuthbertson winner in the regional championship series. Marvin Ridge won 3A state titles in 2015 and 2016. … West swept Crest in the 2004 regional championship series, 18-2 and 2-1, before finishing as 3A state runner-up. … West ended Crest’s football season in Mount Ulla last fall.