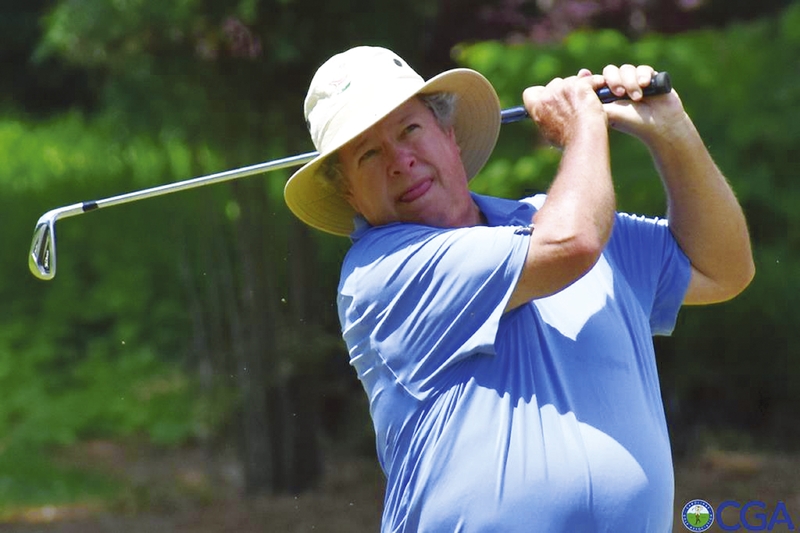 CGA PHOTO ... Paul Simson, of Raleigh, hits a tee shot during Thursday’s round of the N.C. Senior Amateur at the Country Club of Salisbury. Simson won his ninth title in 11 years, this one in wire-to-wire fashion.

Simson won the title in wire-to-wire fashion with a 7-under par 64 on Tuesday, a 72 on Wednesday and an even-par 71 yesterday — for a three-day total of 207.

Simson, 66, has been eligible for the senior amateur event 11 years and has won nine titles.

“I really do not know what the secret is,” said Simson. “I do work pretty hard at getting the ball in the hole, trying to at least play smart. I played some conservative shots this week and I think it worked out for me.”

Simson also has won five of his last six appearances in CGA individual senior championships the past two years. In addition, he won the 2016 North & South Senior Open at Pinehurst Country Club.

Salisbury’s Andre Resner, playing on his home course and in his first CGA event ever, was very impressed with Simson.

“It’s almost like he’s playing his own event,” said Resner. “The rest of us were playing for second place. He’s arguably the best senior golfer ever in North Carolina.”

Simson was comfortably ahead most of the day and had birdies on No. 15 and No. 17 to seal the victory. For the tournament, Simson had an eagle, 13 birdies and 32 pars. He had just seven bogeys and one double-bogey.

Resner, who entered the final round in a tie for 10th place, shot a 77 on Thursday to finish tied for 19th with a three-round total of 223. The effort should lead to an exemption into next year’s tournament.

“I’m tired,” said Resner. “I feel like I’ve been tied to a fence and ‘whupped’ for three days. But it was a fun event and it was nice having all the best senior golfers from the state here. Everyone seemed to really love the course.”

Country club head groundskeeper Ron Bivens and his staff had the course ready and increased the challenge daily.

“(Thursday) was the most difficult day in terms of the course setup,” said Resner. “Each day, the greens got firmer and faster. Ron Bivens and his crew have been kind of priming things for this tournament and he allowed the greens to get as firm and fast as they’ve been this year and maybe all of last year.

“So that made it very difficult,” continued Resner. “There were players, including me, that were hitting irons in and the greens just wouldn’t hold it. The ball would either bounce off the side or go off the back … it was just amazingly difficult.”

Resner said that a good example was No. 7, a par-4 designed to land short and roll up onto the green. Resner had 122 yards to the green and used his 50-degree wedge, which he normally hits 105 yards.

“My shot hit short but it ran, and could have ended up at the No. 8 tee, but it hit the pin squarely and rolled three inches away,” remember Resner. “I birdied it because it hit the pin. Everybody else in my group was over the back because the green couldn’t hold it.”

Resner earned a spot in the tournament by winning the club’s senior championship last October. He played very well, to be in his first non-club tournament. For the three days, Resner had an eagle, seven birdies and 29 pars. He had 15 bogeys and only two double-bogeys in 54 holes.

“I just tried to do myself what I’ve been telling the college kids to do — one shot at a time,” said Resner. “Just stay with the process and don’t think about results … just add it up at the end. So you don’t think about results but sometimes you get in your own way and get ahead of yourself, so you have to constantly keep going back to a routine.”

NOTES: For hosting, the country club received two entries in the state senior amatuer. Resner earned one and Jay Stevens the other, as Stevens won the club’s qualifying tournament. … Stevens had rounds of 82 and 86 and missed the cut for the third round. … Macon Moye, of Pinehurst, finished second to Simson and was the only other golfer under par at 212. … Preston Edmondson, of Morrisville, recorded an ace on the par-3 6th hole, using a 9-iron from 168 yards. He has now recorded 14 holes-in-one for his career.

The Carolinas Golf Association contributed to this article.